August is not only the holiday month for Greece, it is also the month with one of the most celebrated religious events: the celebration of the Assumption or Dormition of the Virgin Mary (Greek: Κοίμηση της Θεοτόκου – the falling asleep of the Holy Mother), which is the taking of the Virgin Mary into Heaven in bodily form. It is regarded as being the summer Easter of the Greeks (Greek: Πάσχα του καλοκαιριού), and is an official public holiday.

Throughout Greece there are churches dedicated to the Virgin Mary and many men and women with the name Panagiotis, Panagiota, Despena and Maria celebrate their Name Day on this special day.

The Virgin Mary ended her life in Jerusalem under the care of Saint John. All the disciples were at her bedside at the moment of her repose except for Saint Thomas. Her body was taken in procession and laid in a tomb near the garden of Gethsemane. When the Apostle Thomas arrived three days later and desired to see her body, the tomb was empty. It is said that Jesus Christ himself had descended and carried her soul to heaven. 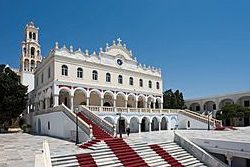 The island of Tinos (Greek: Τήνος), one of the Cycladic islands of the Aegean Sea, is best known for the Church of Our Holy Lady (Panagia Evangelistria or in Greek: Παναγία Ευαγγελίστρια or Μεγαλόχαρη της Τήνου). The church was built on that particular spot after, as tradition has it, a miraculous icon of the Virgin Mary was found there by the nun, Pelagia. The icon is covered with gold, silver and jewelled votive or offerings (Greek: τάματα) given by the many pilgrims that visit the church asking for help. She is considered to be the protector of seafarers and healer of the sick. 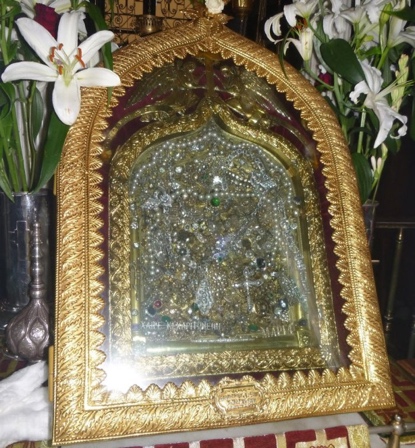 As the icon was found during the first days of the creation of the modern Greek State in 1828 after the defeat of the Ottoman Empire, our Lady of Tinos was declared patron saint of the Greek nation. The church was inaugurated in 1830.

Thousands of worshippers visit the church each year on 15th August in order to ask the Panagia or the Megalochari to help them overcome an illness. Many of them walk to the church from the port on their knees as a sign of worship. It has been said that miracles have happened and that many people have overcome serious illnesses. 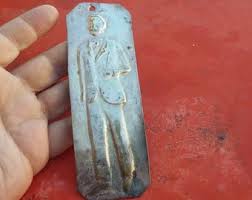 To help them in their plea for recovery, the worshippers leave a tama or an offering in front of the icon. The tamata are rectangular pieces of metal either tin, silver or gold with a part of the body engraved on it. The worshipper chooses the type of tama depending on what is to be healed and how much he can pay. It is usually taken to the church on the Saints Feast Day and hung in front of the icon. 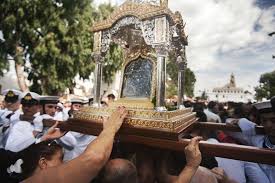 Throughout Greece after the evening church service on the eve of Panagias, 14th August, the icon, which is adorned with flowers, is carried through the streets with the accompaniment of a brass band. After the icon has been returned to the church, everyone gets ready for the panigiri (local feast with traditional music, dancing and local food). The panigiri, which is centuries old, gives everyone the chance to meet and celebrate such an important day. It is part of Greek tradition that is handed down from generation to generation. 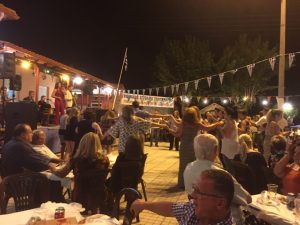