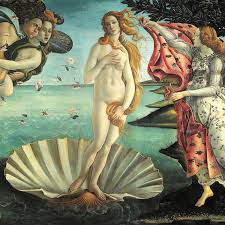 Aphrodite (Greek: Αφροδίτη) is the ancient Greek goddess of love, beauty, passion, pleasure and procreation. Hesiod (Greek: Ησίοδος), an ancient Greek poet, refers to Afrodite as the foam-born goddess in his Theogony, a poem describing the origins of the Greek gods. It was composed around 700 BC. She was born off the coast of either Cyprus or Cythera arising from the sea in a body of foam produced by Uranus’ genitals, which his son Cronus had severed and thrown into the sea. Uranus (Greek: Ουρανός = sky, heaven) was the husband of Gaia (Greek: Γαία – Γη = land, earth) who gave birth to the first generation of Titans and ancestors of the Greek gods.

Aphrodite Pandemos was at first considered the goddess of the family and city life, uniting the population into one body and giving them the idea of belonging to a community. Theseus (Greek: Θησεύς), the mythical king and founder-hero of Athens, was responsible for unifying the people of Attica under Athens into what is referred to as synoikismos or the dwelling together (Greek: συνοικισμός). He established the cult of Aphrodite Pandemos and Peitho (Greek: Πειθώ = persuasion) on the south side of the Acropolis. Peitho’s role was to accompany and to attend Aphrodite. Peitho played an important part when it came to persuading a young woman to accept an offer of marriage. The suitor would have to negotiate with the father of a young woman for her hand in marriage and offer a bridal price in return for her. Later, during the period of Solon the lawmaker, efforts were made to pass laws against political, economic and moral decline. Therefore, courtesans and common prostitutes were put under the protection of Aphrodite Pandemos. Courtesans or hetaira (Greek: εταίρα) were highly educated prostitutes or companions that accompanied the men at their symposiums. 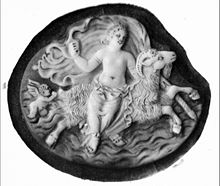 Besides the cults that had been established in Cyprus, cults were also established in Cythera, the island off the south-eastern tip of the Peloponnese, Corinth and of course Athens. The main festival was the Aphrodisia festival. It refers to her diminutive Afro (Greek: Αφρό = foam) and was celebrated annually in Athens in midsummer. It occurred during the month of the Hekatombian, which starts in the third week of July to the third week of August. At the beginning of the festival, a sacred dove, one of Aphrodite’s symbols, would be sacrificed to purify the alter. Aphrodite Pandemos is also represented riding a male goat, which was known as a carnal symbol, representing earthy non-spiritual love. 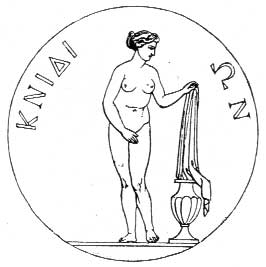 Aphrodite was also worshipped in the ancient Greek city-state of Knidos (Greek: Κνίδος) on the south-west coast of Asia Minor. Her sanctuary honoured Aphrodite Eupioia (Aphrodite of the Fair Voyage) in the capacity of a sea goddess. The sanctuary is also famous for the fact that it held the first life-size statue of the goddess in the nude. It was sculpted in 365 BC by Praxiteles, the most renowned of the Attic sculptors. The sanctuary was very popular with sailors. Aphrodite is represented on a coin from Knidos. 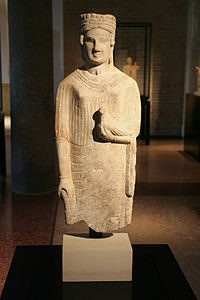 Aphrodite’s symbols include the myrtle, roses, doves, sparrows, swans, the male goat and the tortoise. The statue from Cyprus shows Aphrodite holding a dove. Another image shows her riding on a swan. 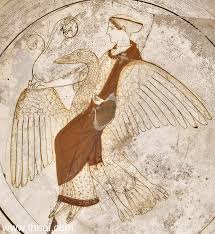