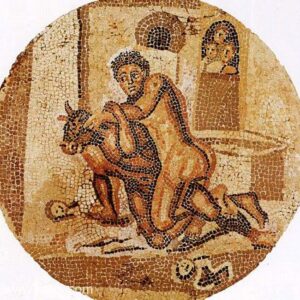 Greek mythology relates to Zeus and the Olympian gods, their demands, and the rewards they give to those that have their favour. Although the myths contain considerable elements of fiction, they are also considered to be true accounts of the events that they describe. There is a great deal of symbolism in all the myths, and they have influenced the arts and literature of Western civilization.

Ariadne was the daughter of the powerful King Minos of Crete. Her brother, Androgeus, had taken part in the Panathenaic Games in Athens in honour of the goddess Athena. He was torn to pieces by a raging bull outside Athens after the Games. King Minos wanted revenge for the death of his son and so forced King Aegeus to send seven young men and seven young women every seven years to Crete so that the city of Athens would not be razed to the ground and the population killed. The group of young people would be sacrificed to the Minotaur, the monster that was half bull and half human and was imprisoned in the labyrinth under the palace of King Minos in Knossos.

But how had this come about? King Minos had offended Poseidon, God of the Sea, because he had not sacrificed a snow-white bull to the god as he had promised. To punish him, Poseidon cursed Pasiphae, Minos’ wife, to fall in love with the bull and to mate with it. The result was the birth of this unnatural being. Pasiphae named it Asterion, which means ‘little star’. As the ‘baby’ grew and became unmanageable in his behaviour and in his consumption of food, this divine monstrosity was given the name Minotaur, ‘the bull of Minos’ (Greek: Μινώταυρος). Therefore, Asterion the Minotaur, and the sacrifices made to him every seven years, would influence her life.

Daedelus (Greek: Δαίδαλος), a skillful architect and craftsman at the court of King Minos, whose skill was unrivalled in the world, was ordered to build a structure to contain the Minotaur. And so, the labyrinth was built. Whoever entered the labyrinth could not escape and was eaten by the Minotaur. The hostages may perhaps have felt honoured that although they were going to their death, they were treading the intricate pathways of such a labyrinth.

When the ship arrived with the new sacrifices, Theseus, son of King Aegeus was with them. He had already proved himself a hero with the feats that he had performed. He was determined to kill the Minotaur and release Athens from this burden. As soon as Ariadne saw Theseus, she fell in love with him and was determined to save him and the rest of the hostages and put a stop to this atrocious event.

Ariadne had a special relationship with Daedelus and so asked his advice. His answer was to place a ball of red twine in her hand. This was the secret to getting out of the labyrinth alive. Daedelus had been carrying this with him waiting for the chance to put right what he had been forced to do. Ariadne gave this to Theseus with the agreement that he would take her with him afterwards as her life would be in danger from her father, King Minos. She would be his first suspect. She explained how he must fasten the red twine to the door and to his wrist and to walk straight ahead. The Minotaur would find him. She would place his club inside the door of the labyrinth so that he could use it to kill the Minotaur and then retrace his steps. The hostages must remain near the door and not try to follow him otherwise they would get lost and die in the maze of paths. As soon as the deed was done, the ship would be ready to take them back to Athens before the alarm was raised.

With the help of Ariadne, Theseus succeeded in killing the Minotaur and escaped from Crete taking Ariadne with him. However, on the way to Athens they stopped at the island of Naxos, the island of Dionysus, the god of wine, the theatre and festivities. Theseus abandoned Ariadne there and continued to Athens. It had been agreed that if all went well, the black sails of the ship that had taken Theseus and the other hostages to Crete, would be replaced by white sails to indicate that the mission had been successful. Unfortunately, due to the excitement of the moment, the sails were not changed. From his lookout on Cape Sounion, King Aegeus saw the black-sailed ship approach. Assuming that his son had been killed, he threw himself into the sea and drowned. It has since been named after him – the Aegean Sea. 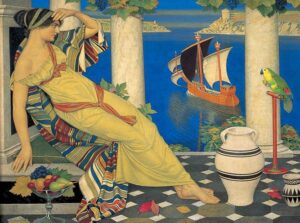 According to the myth, Dionysus, the god of wine, theatre and festivities, is the reason for the separation of Ariadne and Theseus. When he saw her sleeping near where the remnants of the temple of Apollo and its great entry way, the Portara (large door) stand today, he fell in love with her and decided to make her his wife. He visited Theseus in his dreams and told him to leave for Athens without Ariadne. Dionysus married Ariadne and carried her to Mt. Drios, present day Koronos on Naxo, and from there to Mt. Olympus, the ‘official’ residence of the gods.