WOMEN DURING THE GREEK WAR OF INDEPENDENCE 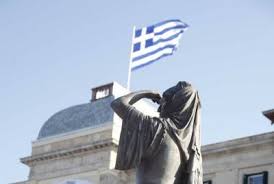 There are many women-symbols throughout history from all walks of life. It is in the magnitude of a woman’s character, which the laws of nature have embedded in her, that make her stand apart and become an example for others to follow. The women that took part in the Greek War of Independence, either directly or indirectly, all have a common denominator: their love for their country and their fight for freedom against all odds; ideals that many of them died for.

This year, as we are celebrating the 200 years of Greek Independence from over 400 years of Ottoman oppression, I would like to pay tribute to the women who helped free the country that we now call Greece. Most of them were ordinary village women; others were from wealthy and well-educated families, while others from noble descend. However, none of them hesitated in taking an active part in the fight to once again have a country of their own. Although the Greeks were spread out from the mainland to the islands of the Aegean and in various parts of the Balkans and Asia Minor, their common language, religion and history united them in this cause.

The position of women throughout the Ottoman Empire was one of suppression. Whether they lived or died was at the whim of the local Ottoman ‘effendi’. Although their freedom was limited and they were basically submissive to the male members of the family, they were also respected by them. They worked hard not only at home and in the fields, but they were also responsible for the bringing up of their children and passing on to them the Greek language, their orthodox religion and cultural heritage. This kept alive the flame for independence and freedom: their aim was to throw off the yoke of slavery. The determination and bravery of these women could be seen in the support of their men and in the fact that they did not hesitate to take up arms to help free their country. They preferred to die rather than be raped, sold into slavery or converted to Islam. 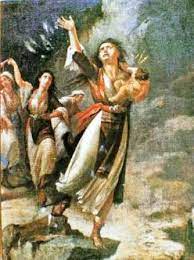 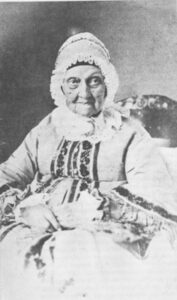 Fighting for freedom was a part of their being and this was expressed either as a group as in the case of the Souliotises, who sang and danced as they threw themselves over the cliff along with their children, or individually. They were mothers who gave not only their wealth, but also their children to the cause such as Elizabeth Ypsilanti, the mother of Alexandros Ypsilantis, one of the founders of Filiki Etaireia, the secret organisation for the liberation of the Greek nation. 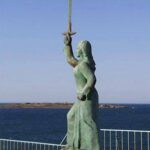 They were young maidens as early as the 15th century, such as Maroula of Lemnos, who did not hesitate to take up her dead father’s sword and charge at the invading Ottoman hordes to give courage to the Greek men who were guarding the area of Kotsina, giving her life in the process. 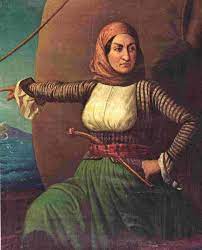 The first woman sea captain, Laskarina Yiannouzos-Bouboulina, did not hesitate to take over her first and second husband’s trading business, add four more ships to her fleet as well as building the first Greek battle ship ‘Agamemnon’ under the noses of the Ottoman Turks. She used her wealth for the buying of arms and food for the troops that were under her command. She took an active part in all the naval battles and sieges against the Ottomans such as that of Nafplion, Monemvasia and Pylos. On the other hand, she did not hesitate to help the women of the Sultan’s harem escape from being captured when the Greek forces under Theodoros Kolokotronis entered Tripoli. After her death in 1825, Alexander I of Russia granted Bouboulina the honorary rank of Admiral of the Russian Navy. In 2018, she was granted the title of Rear Admiral in the Hellenic Navy. She is the only woman in history to hold these titles so far. Her statue stands in the harbour of Spetses and her house has been turned into a museum. 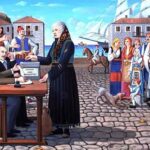 There are also the sacrifices of ordinary women such as Panoria Hatzikosta, a once-wealthy woman who arrived in Nafplio as a refugee from Asia Minor from the coast town of Aivali, opposite the island of Lesvos. The township was destroyed by the Ottoman Army in June 1821 in retaliation for the destruction of a frigate by the Greek navy. Those that were lucky enough to escape went to the island of Lesvos and from there to other free parts of Greece. Overnight, she went from ‘rags to riches’ as in this disaster she lost her husband, her children and her wealth and had to beg in the streets. She did not hesitate to take under her wing orphaned children and look after them in an abandoned house. However, it is more for her gesture of giving her wedding ring and her last coin in a fund-raising drive for the besieged Mesologhi that she is remembered. This woman who had nothing, offered the last of what she had. Her example was followed by others and soon a large amount of silverware and coins were collected. She gave not only a lesson of patriotism, but also of humanity with the looking after of orphans. Her name was used in the phrase ‘Psorokostaina’ to refer to the poor economic situation that Greece was going through.

The actions of such women have been expressed in traditional Greek songs as in the ‘Dance of Zalongo’ for the sacrifice of the Souliotises as well as films such as ‘Bouboulina’ with Irene Papas. The Greek Revolution inspired artists throughout Europe to write plays, poems, compose music and create works of art that can be still be seen today.

Only admiration and respect can be expressed for such women, who with their bravery, sacrifice, determination and patriotism did not hesitate to give whatever they had, all for the cause of liberating their country from over 400 years of Ottoman oppression and violence. Their actions show that there is no higher sacrifice and honour than serving and dying for your country: ideals that make up the legacy of Hellenism.