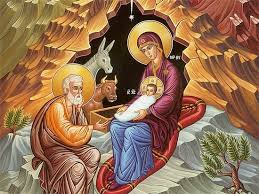 The festive season of Christmas (Greek: Χριστούγεννα) is a time of celebrating life and the giving of gifts. It celebrates the birth of Jesus Christ, the Saviour of Man, the bringing of peace and love to the hearts of the people.

According to the gospels of Luke and Matthew, Jesus was born in Bethlehem, a township 10 km south of Jerusalem in Judea, during the reign of King Herod the Great. The birth was caused by divine intervention and was announced to Ma 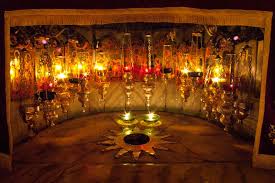 ry, Jesus’ mother, by the Archangel Gabriel. Emperor Constantine was the first Roman Emperor to embrace the Christian religion. His mother, who had the title of Empress of the Roman Empire and was of Greek origin, built the Church of the Nativity on the spot where Jesus was born around 339-340 AD. The fourteen-point silver star beneath the altar in the Grotto marks the position of where Jesus was born. It symbolises the shining star that led the three Magi from Chaldea in Mesopotamia to Bethlehem. Above the star hang fifteen silver vigil oil lamps, six of which belong to the Greek Orthodox Church, five to the Armenian Orthodox Church and four to the Catholic Church.

The exact date of Jesus’ birth is not known, but according to tradition, Mary was told about the coming birth of Jesus by Archangel Gabriel on 25 March, the day when the Annunciation is celebrated by all Western Churches. Therefore, nine months later brings us to 25 December. Another explanation is that the Winter Solstice, which takes place at around 21 December each year, was a time of midwinter celebrations during the ancient Roman period where the festival of ‘Saturnalia’ was celebrated. This event gave the people a chance to celebrate during the cold months of winter. 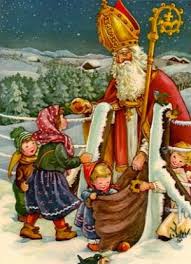 Therefore, the celebrating of Christmas is a mixture of pre-Christian and Christian religious and secular themes. These celebrations are expressed with the giving of gifts, putting up wreaths, singing carols, decorating Christmas trees or boats as is the tradition on many of the Greek islands. Christmas is also the familiar figure of Santa Claus or Saint Nicholas, the early Christian Bishop of the ancient Greek maritime city of Myra in Asia Minor during the time of the Roman Empire. He is not only the patron saint of sailors and merchants, but also of children with the giving of gifts. His Name Day is celebrated on December 6.

Food is also an important part of any celebration. In most Western countries, Christmas lunch is celebrated with a stuffed turkey followed by pudding for desert. This tradition has also been adopted by the Greeks, but traditionally Christmas lunch consisted of a pork dish cooked with celery in a lemon sauce, homemade pies of spinach, leeks and other greens as well as stuffed cabbage rolls (Greek: λαχανοδολμάδες), which dates back to the Byzantine period. The cabbage leaves symbolise the swaddling clothes of Jesus. Desert is usually ‘kourabiedes’ (short-bread type of biscuits covered with icing sugar) and ‘melomakarona’ or biscuits dipped in a honey syrup and sprinkled with a mixture of crushed walnuts and cinnamon.

The pork and celery dish is usually cooked on mainland Greece in the villages where a home-grown pig would be slaughtered at this time. The pork meat was usally stored in various ways (salted or put in brine), or made into sausages to make it last for most of winter.

Instead of a stuffed turkey this Christmas, why not try pork with celery and lemon sauce. 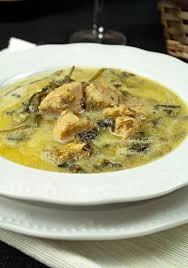 Have a happy festive season!!!