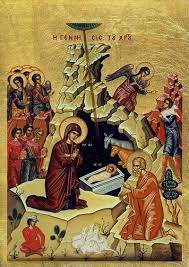 Christmas is a time of joy, commemorating the birth of Jesus Christ. In Greek the word Christougenna (Χριστούγεννα) means the birth of Christ (Χριστός = Christ and γέννα = birth). No one knows the exact date of Jesus’ birth, and so in the early fourth century the Church fixed the date as 25th December, nine months after the Annunciation to Mary by the angel Gabriel that she would become the mother of Jesus Christ.

It can be said that the first recorded date of Christmas being celebrated on December 25th was in 336 A.D, during the time of the Roman Emperor Constantine, who was the first Christian Roman Emperor. While many Western Christmas traditions have been adopted in Greece, the Greek Christmas retains its own traditional colour. It is not only the different dishes and sweets that are served at Christmas, but also the fact that there are many Holy Days throughout December. One such Name Day is Saint Nicholas (270-343 AD) celebrated on 6th December. He was an early Chrstian bishop from the maritime city of Myra in Lycia Asia Minor (Greek: Μύρα), now Turkey. He was in the habit of secretly giving gifts to those in need, thus giving rise to modern day Santa Claus in the Western Christian culture, who brings gifts on Christmas Eve to well-behaved children. Saint Nicholas is also the patron saint of sailors as he calms stormy seas, thus saving sailors in danger. The churches dedicated to the Saint may often be found on headlands overlooking the sea. 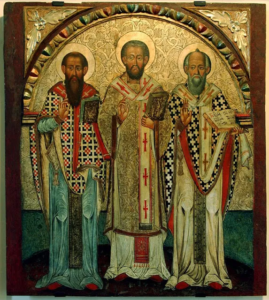 However, the Saint most associated with gift-giving during the festive season in the Greek Orthodox Church is that of Basil the Great or Basil of Caesarea known as Aghios Vasilis (Greek Άγιος Βασίλειος). Saint Basil was one of the Three Hierarchs (Greek: Οι Τρεις Ιεράρχες), who helped shape the Christian theology in the 4th century. The other two are Gregory the Theologian and John Chrysostom, who were both archbishops of Constantinople during the 4th century.

Saint Basil was known for his care of the poor. He built a hospital, a hospice and an orphanage in Caesarea as well as dedicating his family’s inheritance to benefit the poor. His Name Day is celebrated on 1st January and presents are usually given out on New Year’s Eve, the eve of the Greek Santa, and not on Christmas Day. Christmas Day is usually celebrated with big family dinners of pork, lamb or turkey and traditional sweets such as kourambiedes and melomakarona. Also, those with the name of Christos or Christina celebrate their Name Day on this day as they are named after Jesus Christ. Gifts of sweets and personal items are usually given to those celebrating.

Instead of a Christmas Cake, a New Year’s Eve cake is cut: the traditional Vasilopita in honour of Saint Basil. The Vasilopita (Greek: Βασιλόπιτα) contains a coin, and it is believed that the person who finds it in their slice will be blessed with good fortune for the rest of the year. This tradition is based on the tale involving St Basil, who had many valuables in his possession belonging to the citizens of Caesarea with no way of knowing what belonged to 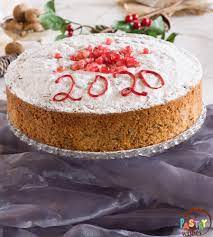 whom. This story relates to the overtaxing of the citizens who were even forced to hand over their jewelry. St Basil declared this action to be unjust and forced the tax collectors to return the gold and jewelry to the people. However, as it was difficult to return each item to its rightful owner, he came up with the idea of baking small cakes filled with a piece of jewelry. In this way, everyone received something, and no one was left out. This cake is now known as Vasilopita and Saint Basil is now associated with the tradition of gift giving. For centuries after, Greeks would give one another presents on New Year’s Day rather than Christmas Day.

The festive season is also connected with the singing of carols or kalanta (Greek: κάλαντα). This is another way for children to be given small treats in the form of money or sweets. These carols are sung three times throughout the holidays: in the morning of Christmas Eve, New Year’s Eve and the Eve of Epiphany or Theofania or ta Phota (the lights). The children ring the doorbell and ask permission to sing the traditional carols or kalanta. The Christmas carols would start with the narration of Christ’s birth and continue with expressions of praise for the household and the people living in it. The New Year carols refer to Saint Basil coming from Caesarea, holding pen and paper and baked sweets. The Epiphany carols refer to the blessing of the waters and the light that is spread everywhere with the baptism of Jesus Christ in the river Jordan by John the Baptist. The singing of the carols is usually accompanied by the triangle, but other musical instruments may also be used.

Below is a part of a Greek Christmas carol. 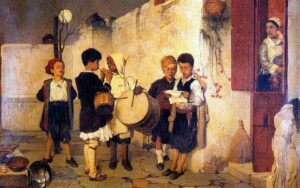