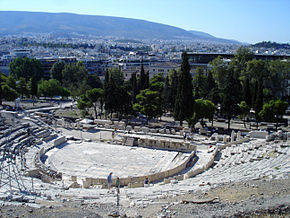 Present-day remains of the Theatre of Dionysus Eleuthereus, Athens

Continuing on from the previous article on Tripodon Street, which leads to the Theatre of Dionysus and was marked by the tripods to honour the winner of the competition for the best play and music that marked the

celebrations for the Dionysian Festival in Athens, I would like to refer to the Theatre of Dionysus Eleuthereus. It is the first stone theatre built at the foot of the Acropolis in the 6th century BC when the cult of Dionysus was brought to Athens. It held 17,000 people. The theatre was built at the time when ‘drama’ or ‘theatre’ was first created. It is thought that the first drama was presented by Thespis in about 530 BC probably in the Agora. This is where we get the word ‘Thespian’ (Greek: Θεσπέσιος), which means ‘divine’, ‘wonderful’, but not only related to drama or the theatre. 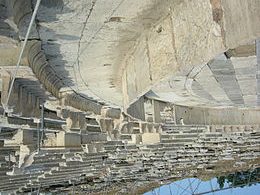 Marble thrones in the Theatre of Dionysus

Eleuther, the son of Apollo and Aethus (Greek: Αϊθουσα, portico that opens to the sun, thus Apollo) was the founder of the township Eleutherae in the northern part of Attica, which was on the border with the territory of Boeotia. Eleutherae (Greek: Ελεύθεραι – meaning free, freedom) decided to become a part of Attica and thus an extension of Athens in order to get away from the bullying of its neighbour, Thebes. To celebrate this union, the wooden statue of the god Dionysus was brought to Athens. This was the beginning of the cult of Dionysus and the establishment of the feast of Dionysus Eleuthereus in Athens.

Originally, the feast of Dionysus was an Eleutherean festival to celebrate the new wine. In Athens it led to the creation of the literary and artistic competition as the god Dionysus was also the patron of the arts. Dramatists such as Aeschylus, Sophocles, Euripides, Aristophanes and Menander took part. These dramatic festivals involved the production of four plays -three tragedies and one satyr play, which featured lighter themes. At the beginning, the subject matter of the four plays was often linked, with the three tragedies forming a trilogy such as Oresteia of Aschylus. This famous trilogy (Agamemnon, Choeptori and Eumenides) won the competition of 458 BC. The plays tell the story of the curse of the house of Atreus: Agamemnon’s murder by his wife, the revenge of their son, Orestes, upon his mother, and Orestes’ trial in Athens.

At the beginning, the theatre itself was a simple structure, but alterations were continuously being made even during the Roman period. A new stage was built, marble slabs were used on the floor of the orchestra and new seats of honour were constructed around its edge. In the late 4th century BC exaggerated masks were worn and were considered very important for character identification to an audience of thousands. Dramatists would also have had a skene (stage, scene) and a wheeled platform for special effects (ekkyklema) as well as a lifting device (mechane). In the Roman period, ‘crude Roman amusements’ replaced the sacred performances of the ancient Greeks. By the Byzantine period, the entire complex had been destroyed. 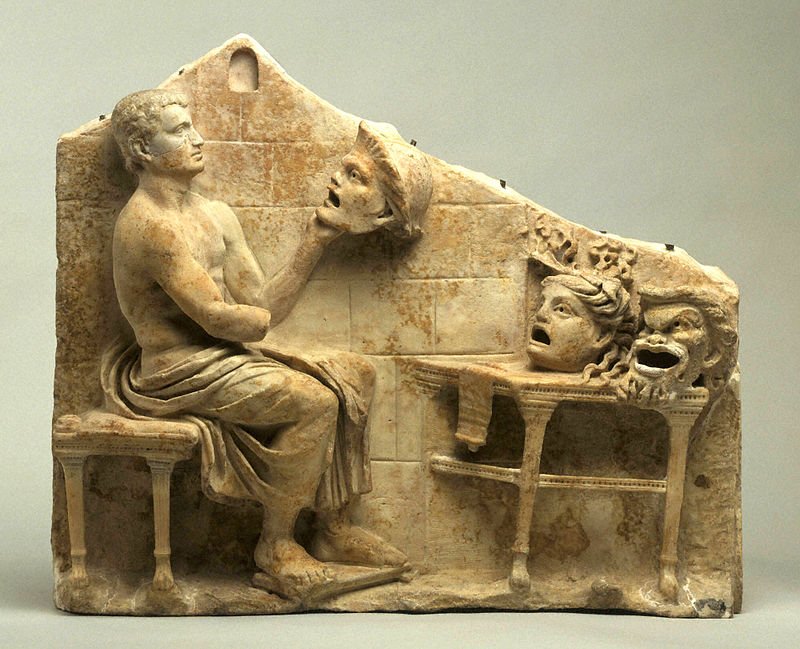 Roman, Republican or Early Imperial, Relief of a seated poet with

Partial restoration of the theatre began in 2009. What remains today dates back to the Roman period. Archaeologists have identified nine different building phases. It is hoped that theatre performances will again be hosted in this remarkable theatre. 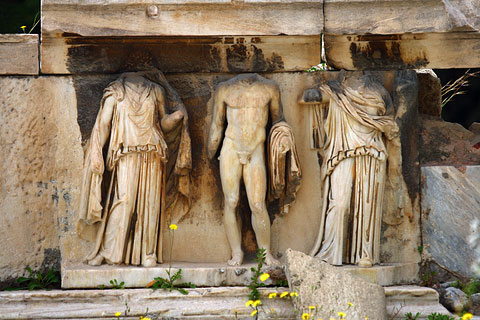