Mermaids are connected with the sea and the fact that the city of Thessaloniki is on the coast ties in very well with the naming of it. 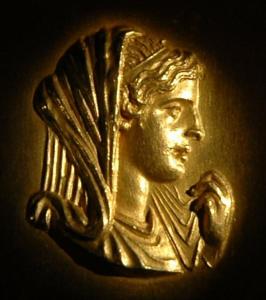 Thessalonike was born on the day of the decisive battle of the Crocus Field (Greek: Μάχη του Κροκίου Πεδίου) in 352 BC. Her father, King Phillip II of Macedon, defeated the Phocians (Greek: Φωκαέων – Φωκίς) in central Greece near Delphi. Her mother was Nicesipolis (Greek: Νικησίπολις) from the city of Pherae (Greek: Φεραί) in Thessaly (Greek: Θεσσαλία). In order to celebrate this significant event, Phillip named the new-born child ‘Thessalonike’ (Greek: Θεσσαλονίκη) from the words ‘Θεσσαλία’ and ‘Νίκη’ = Thessalian + Victory, as the battle took place on the plain of Thessaly.

Thessalonike was brought up by Olympia, Alexander the Great’s mother, as her mother had died soon after she was born. She did not have a great deal of contact with her half-brother as Alexander’s time was spent with Aristotle, the ancient Greek philosopher and scientist. The education that he was given by this famous philosopher shaped his way of thinking, broadening his horizons and leading him to create one of the largest empires of the ancient world by the age of thirty.

Thessalonike was only twenty-one when Alexander died in June 323BC in Babylon. He was only 32 years old. Upon his death, his empire, which stretched from Greece to Asia Minor, India and Egypt, was divided among his generals. Cassander (Greek: Κάσσανδρος), one of his generals, overran the fortress of Pydra in the area of Pieria where Thessalonike had taken refuge along with Olympia. He killed Olympia and took Thessalonike to be his wife. He paid her the honour of naming the new city, which was to be the new capital of Macedonia, Thessaloniki in her honour. She had three sons: Phillip, Antipater and Alexander.

The city of Thessaloniki was built on the site of ancient Therma (Greek: Θέρμα), a mosquito-infested swampland, which had been founded by the Eretrians and Corinthians in late 7th century BC. Therma means ‘warm’ and is connected with the ‘malarial fever’ that was widespread in the township.

Although Thessalonike had not spent a great deal of time with Alexander, the story behind her becoming a mermaid is connected with Alexander’s quest to find the Fountain of Youth. It is said that he brought back with him a flask of this invaluable water and with it he washed his sister’s hair. When Alexander died, Thessalonike was so grief-stricken that she wanted to drown. However, instead of drowning she became a mermaid.

Mermaids are sea creatures with the head and upper body of a female human and the tail of a fish. They are found in many legends connected with the sea, storms and shipwrecks as well as good deeds. They are connected with the ancient Greek legend of the Sirens who lured the sailors with their enchanting music and song causing them to shipwreck on the rocky coastline of their island as in the tale of Odyssea. 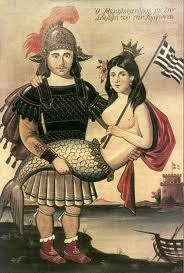 When sailing ships passed by, Thessalonike the Mermaid, would ask the sailors the following question: Is Alexander the king alive? (Greek: Ζει ο βασιλιάς Αλέξανδρος;). The correct answer would be, He lives and reigns and conquers the world. (Greek: Ζει και βασιλεύει και τον κόσμο κυριεύει.)

If she was given this answer, she would allow the ship and its crew to pass safely in calm seas. Any other answer would transform her into a fierce Gorgon-like creature, causing storms and wrecking the ship and drowning the sailors on it, sending them all to a dark and bottomless grave.

There are many interpretations to this dialogue between the Mermaid Thessalonike and the sailors. One interpretation is that you should think before you answer a question. I would also like to put forth my own interpretation to this allegory. Thessalonike may have been turned into a mermaid, but she was above all a woman with all the attributes that a woman has, those of love and compassion. She could not accept the death of her beloved brother, Alexander. She therefore wanders the Seven Seas in great distress asking the question that torments her: Is Alexander the king alive? She hopes for a positive answer and lives for the day when she will see her brother again.

It is interesting to note that although there is the statue of Alexander the Great at one end of Thessaloniki harbour there is no statue of Thessalonike the Mermaid. However, the island of Thasos has a statue of the Mermaid with an inscription on it by Nikos Kazantzakis. It reads:

στην θάλασσα in the sea 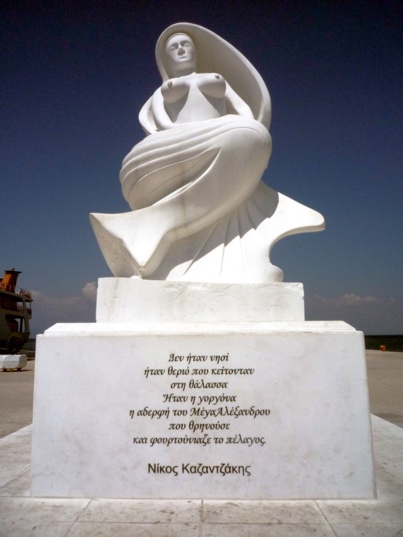