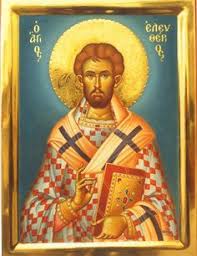 There are many Feast Days in December in the Greek Orthodox Church leading up to Christmas. One such Feast Day is that of Agios Eleftherios (Greek: Άγιος Ελευθέριος), whose Feast Day is on December 15. He is the patron saint of expectant mothers and childbirth as his name suggests. Eleftherios means one who is free.

Eleftherios was the only son of Anthia (Greek: Άνθια) and the Roman consul Eugenius. His father died when he was young and so his mother took him to the Bishop of Rome, Anictus, around 157 AD. She had already been converted to Christianity by the Apostle Paul after listening to him preach the Gospels. In fact, she was baptised by him. Anthia entrusted the education of Eleftherios to Bishop Anictus. Eleftherios was one of the youngest to be accepted into the fold of the Christian Church. The Bishop saw how promising the young boy was with his intellect and virtuous stance and so ordained him a deacon at the age of fifteen, a priest at eighteen and a bishop at twenty at the diocese of Illyricum of the Roman Empire in the area of Albania today.

As a bishop in Illyricum, Eleftherios promoted the cause of Christianity. His charismatic character and sweet disposition drew the idolaters to him and they accepted their conversion to Christianity at a time when merciless persecutions made it difficult to win and hold converts. Even those that did not convert held him in great respect. His reputation spread as far away as Britain and so King Lucius sent him a letter asking that he and his people be converted. Eleftherios sent two trustful followers to do this.

The new religion was not accepted by the Roman State and the majority of the people and there were threats to the life of Eleftherios. It was not long before the work carried out by this outstanding theologian, orator, and benefactor of Christian and pagan alike was finally mentioned to Emperor Hadrian, who ordered his arrest. Eleftherios’ preaching had to be stopped.

Hadrian, the Roman emperor of that period, dispatched Felix, his most trusted centurion to bring the bishop to Rome for trial and punishment. Felix found the church in which Eleftherios was preaching and crept in just as the bishop was starting his sermon. He had not wanted to seize him openly to avoid any public protest by his followers. The sermon was so spellbinding that when it was over, Felix came forth and asked to be converted to Christianity. Felix explained the purpose of coming to the house of God, and apologized for his treachery. Eleftherios forgave him, but knew that the centurion had to take him to Rome to face Hadrian.

The emperor tried to change Eleftherios’ mind about his preaching and the conversion of people to Christianity, but Eleftherios’ belief was so deep that he would not be moved. His torture with hot boiling oil, resin, heated irons and being thrown to the lions had no desired effect on him. He came out of them without any scars on his body. In the end, he was executed by clubbing as tradition would have it on 15 December. When his mother ran to take his dead body in her arms, she was beheaded 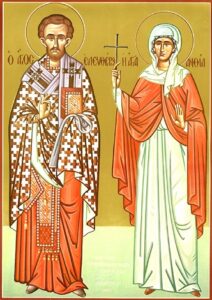 alongside him. Therefore, on the Feast Day of Agios Eleftherios on 15 December, the day of his death, his mother Anthia is also venerated.

In Greece, Agios Eleftherios is the protector of expectant mothers and those that are having a difficult pregnancy. On that day, they do not take hold of a needle. Also, women with a difficult pregnancy often dedicate their child to the Saint and give him his name, whether a boy or a girl. On the island of Lesvos, midwives also ask the Saint for his help in delivering a healthy child.

For those with the name of Eleftherios or Eleftheria and Anthia, Anthi, a Happy Name Day.