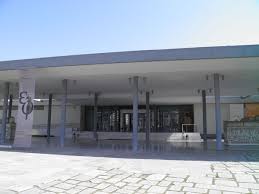 Museums are a treasure-trove of wonder and the Museums of Greece even more so.

While in Thessaloniki, I visited the Archaeological Museum for the umpteenth time and again marvelled at the detail of so many of the exhibits: works of art that continue to amaze the visitor no matter how many times they are viewed.

The museum was built in 1962 with a new wing being added in 1980. One of the permanent exhibitions that a visitor can see is that of The Gold of Macedon (Greek: Μακεδονία), with artefacts from the cemeteries of eight ancient settlements 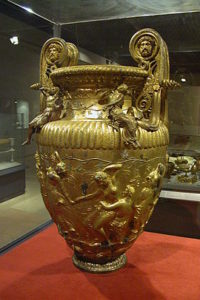 One of the ancient settlements about 10 kilometres north-east of Thessaloniki is that of Derveni where the Derveni Krater was found in the necropolis in 1962. This unique urn of sophisticated metalwork of the 4th century BC was used as a vessel to mix wine and water and probably with various spices as well. The mouth of the krater was covered by a bronze strainer-like lid, which was used to strain the wine. The krater is made of an alloy of bronze and tin in such amounts that it has a golden sheen without the use of any gold. When unearthed, it contained the ashes of a deceased man from Larissa.

The inscription on the krater reads: ΑΣΤΙΟΥΝΕΙΟΣ ΑΝΑΞΑΓΟΡΑΙΟΙ ΕΣ ΛΑΡΙΣΑΣ. The inscription is in the Thessalian variant of the Aeolian dialect: Astiouneios, son of Anaxagoras, from Larissa. 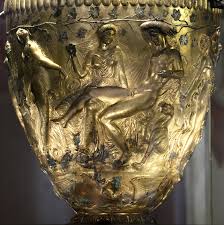 Its elaborate decoration consists of a hymn to the god Dionysus and his supreme power over both life and death. Dionysus (Greek: Διόνυσος) is the god of the grape harvest, winemaking, fertility, theatre and religious ecstasy. The sacred wedding of Dionysus and Ariadne is depicted on the main side of the vase. Ariadne (Greek: Αριάδνη) was the daughter of Minos, King of Crete. She helped Theseus find his way out of the labyrinth after he had killed the Minotaur by giving him a ball of thread, which he used to mark the way out of the labyrinth. We now refer to this as Ariadne’s thread (Greek: μιτό της Αριάδνης). Theseus took her with him when he left Crete, but abandoned her on the island of Naxos where she was found by Dionysus, who fell in love with her and married her.

This sacred wedding is depicted on one side of the vase. The couple is seated on a rock and the naked Dionysus has placed his leg familiarly on his wife’ thigh. Ariadne is gazing at her husband in a characteristically bridal gesture and is getting ready to unveil herself to her new husband. A panther, an animal sacred to the gods, stands behind Dionysus. The gods’ followers, the Maenads, surround the couple. Some are carried away by their orgiastic dance, while others sit on top of the shoulder of the crater. A Silon is watching the dance holding a thyrsus. Mythical figures, tame and wild animals, vine and ivy-branches, adorn the  surface of the crater. 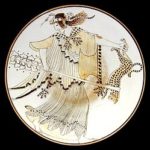 ones) were the female followers of Dionysus. The Maenads were made up of three age groups: virgins, young and old. They corresponded to the stages of initiation that was completed with an orgiastic dance. They carry a thyrsus (Greek: θύρσος), a staff of giant fennel covered by vine-leaves and grapes or ivy-leaves a

nd berries. It is a symbol of prosperity, fertility and pleasure. Sometimes the thyrsus was shown together with a kantharos wine cup (Greek: κάνθαρος), another symbol of Dionysus, forming a male-female combination. 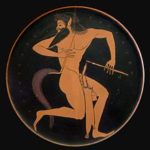 Satyrs (Greek: σάτυρος) were his male companions. They usually have horse-like ears and tails as well as a permanent exaggerated erection. Other followers of Dionysus that made up his retinue were the silini, forest people with ears of a horse. Silenus was Dionysus’ tutor. Although he was the oldest and wisest of Dionysus’ followers, he was also the most drunken. He is often depicted riding a donkey. 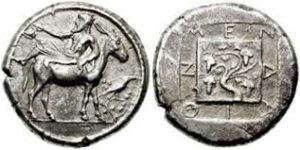