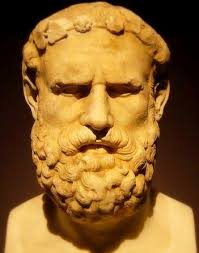 The tomb of Diagoras of Rhodes (Greek: Διαγόρας ο Ρόδιος), the Greek Olympic winner, was found in the area of Turgut, Turkey, near the coastal city of Marmaris. The tomb dates to 3rd century BC. Up to now the Turks thought that the tomb belonged to a Muslim saint and would take offerings there. 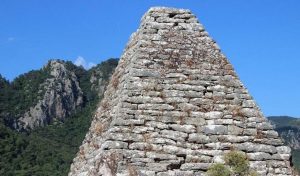 The tomb has been plundered by antiquity smugglers, but it is believed that there was a statue of Diagoras and his wife on top of the tomb. The inscription on the tomb reads: ‘I will be vigilant at the very top so as to ensure that no coward can come and destroy the grave.’

Diagoras of Rhodes was a famous boxer (Greek: πυγμάχος), descending from Damagetus, King of Ialysos and Aristomenes, the Messinian hero who had played a prominent part in the struggle against Sparta. Ialysos was an ancient Doric town, about 8 kilometres west of the town of Rhodes, the island’s capital.

Diagoras is said to have won every fight that he had taken part in. He was first crowned champion in 464 BC in the 79th Olympiad. He went on to win again in the following Olympic Games, which were held every four years as are the modern Olympic Games. He won four times in the Isthimian Games, twice in the Nemean Games, at least once in the Pythian Games as well as others held in places such as Argos, Lykaia, Aegina, Megara as well as his homeland Rhodes. He was known for his unique boxing style and referred to as ‘euthymachos’ because he kept his body straight (euthys), not trying to duck or side-step. He always followed the rules as he wanted his victory to be honest.

Boxing dates to at least 7th century BC and was carried out in many city-states in ancient Greece. This can be seen from the many frescos found in places such as Thyra in Santorini and on amphorae that have boxing scenes painted on them. 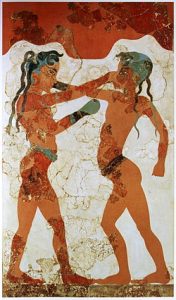 Besides being a champion in his field, Diagoras was also devoted to his family. His sons and grandsons also became famous champions not only in boxing but in wrestling and in the pankration, which literaly means ‘all force’ and is a combination of wrestling and boxing. 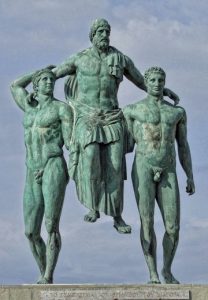 ριέας ) as well as his grandsons Eucleas and Pesirodus (Greek: Ευκλής, Πεισιρρόδος) took part in. In the 83rd Olympic Games, his sons Damageitos and Akousilaos were crowned champions. To celebrate their triumph they raised Diagoras on their shoulders and made a turn of the stadium. At that moment, one of the spectators called out: Κατθανε Διαγόρα, ουκ εις, Όλυμπον αναβήση (Ancient Greek), which in Modern Greek is: Πέθανε Διαγόρα, μην περιμένεις να ανέβεις και στον Όλυμπο. In other words, Die Diagora, don’t wait to also go to Olympus (to be with the gods of Olympus and therefore an immortal). And thus, Diagoras among the cheering and the euphoria and in complete bliss left his last breath. He is said to have died in 448 BC.

Pindar (Greek: Πίνδαρος, 522-443 BC), an ancient Greek lyric poet from Thebes, wrote a victory ode (Olympian Ode VII) to honour Diagoras. These odes were usually sung or chanted to the accompaniment of a lyre. A part of the ode that refers to Diagoras is below in Modern Greek and the English translation.

Thus to the sound of the twain am I come with Diagoras sailing home, to sing the sea-girt Rhodes, child of Aphrodite and bride of Helios, that to a mighty and fair-fighting man, who by Alpheos’ stream and by Kastalia’s hath won him crowns, I may for his boxing make award of glory, and to his father Demegetos in whom Justice hath her delight, dwellers in the isle of three cities with an Argive host, nigh to a promontory of spacious Asia.