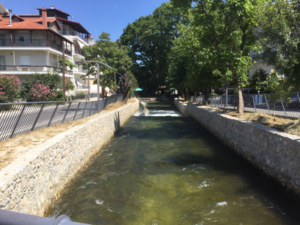 A trip to Edessa and from there to the thermal baths of Pozar in the prefecture of Pella is a must. The region takes its name after the ancient Greek city of Pella, which was also the birthplace of Alexander the Great.

Edessa (Greek: Έδεσσα) is the capital of Pella in the Central Macedonian region of Greece. It is also known as the “City of Waters and of the 5 Senses” as there are small channels of water crisscrossing the township with small bridges to help in communication, with the water cascading into the gorge below.

According to ancient sources, Caranus (Greek: Κάρανος) was the first king of the ancient Greek kingdom of Macedonia and the mythical founder of the Argead dynasty, which ruled from about 700 to 310 BC. Due to its strategic location, it was conquered by the Slavs, became a part of the Byzantium Empire, was disputed by the Serbs, and finally came under Ottoman rule in 1389. After almost 500 years of Ottoman rule, Edessa became a part of the new independent Greek State on 18 October 1912 during the First Balkan War. In 1922, with the exchange of population between Greece and Turkey, the town grew economically with the influx of the Greeks from Asia Minor. Despite the various periods of conquest, Edessa kept its national identity and its incomparable natural beauty. 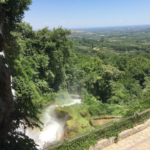 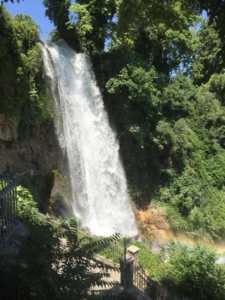 Today, Edessa is included in the most beautiful cities of Greece. The Edessa Waterfalls is the main attraction. The Great Waterfall, called Karanos, falls from a height of 70 km and comes from the springs of the nearby mountain range of Kaimaktsalan. A footpath leads to behind the curtain of falling water where you can see the sheer fall of the water onto the rocks below, creating a double waterfall known as Lamda Falls, which end up in two bluish-green water pools. The water continues to cascade down into the fertile valley below. The Edessa Waterfalls are said to have been formed in the 14th century, after a major geological phenomenon such as an earthquake. 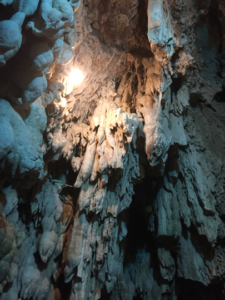 The small cave next to the Falls is also worth a visit for its fanglike stalactites of different shapes, sizes and colours. Outside the cave is the balcony, which gives you a breathtaking view of the Macedonian valley below. It is a world heritage area.

The Waterfall Park, which is before the waterfalls, is the old industrial area of the town. The gradient of the area was taken advantage of so that the water could be used to power the first textile factories and workshops. The flour and hemp mills, and tanneries gave an economic boost to the area. 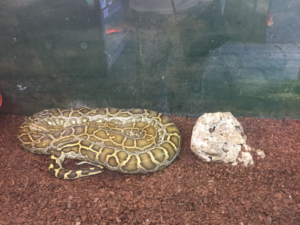 However, due to the inability to modernize, the factories were closed permanently in 1962. It is now a heritage park area, allowing the visitors to encounter the history of the area and the importance of the water element. The various buildings have been turned into small museums such as the Reptile Museum, the Mill Museum, the Sesame Mill of Flavours, the Hemp Factory, and various exhibition areas.

Besides the waterpark area and the waterfalls, Edessa has an interesting historical centre with its archaeological sites, the 14th century church of the Dormition of the Virgin Mary and other Byzantine churches as well as the Geni Tzami, the only Turkish mosque that has been maintained without any alterations. 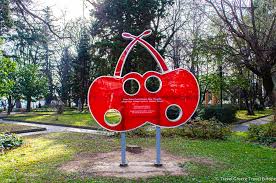 Edessa is also known for its production of cherries. It produces the sweet table cherries that are twin stemmed. They are juicy and sweet and deep red in colour. The well-known ‘Vodena’ cherries (Greek: Βοδενών) are grown here. It means ‘water’ due to the great abundancy of water in the area and it was given by the Bulgarians when they conquered the area in 9th century AD. However, the cherry tree and its incomparable aroma is referred to by Herodotus, the Ancient Greek historian and geographer. 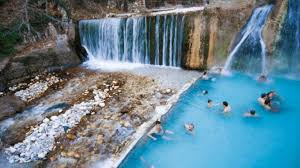 From Edessa, a short half-hour drive takes you to the Pozar Thermal Baths (Greek: Λουτρά Πόζαρ), outside the village of Aridea (Greek: Αριδάια). Pozar means ‘under the fire’. The river ‘Toplitsa’ (meaning ‘the hot river’ in the Slav language) flows through the beautiful gorge in the foothills of Mount Kaimaktsalan, forming small cascades and shallow pools. The river is now referred to as Saint Nicholas. The water, which is 37 degrees centigrade, infiltrates the ground where it is heated, and then comes back to the surface enriched with minerals and trace elements. It offers therapeutic relief and rejuvenates the body and soul, releasing tension and bringing a sense of calm. The water is also drinkable. 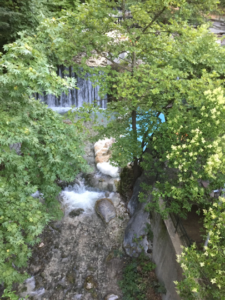 The Springs have been operating all year round since the 1960s by the Municipality of Edessa. There are forty-eight individual baths as well as a large pool and a small natural pool with the waters cascading into them. There are several bridges over the river making it possible to cross from one side to the other and admire the natural surroundings.