The Byzantine Empire had 94 Emperors over a span of 1123 years from 330 to 1453 AD when Constantinople fell to the Ottoman Sultan Mehmed II. The last emperor was fated to be Constantine XI Dragases Palaiologos (Greek: Κωνσταντίνος ΙΑ Δραγάσης Παλαιολόγος). He was born on 8 February 1405, the fourth son of Emperor Manuel II and the Serbian princess Helena Dragas. The fact that the city’s founder was named Constantine and its loss under an emperor by the same name was not seen as a coincidence, but as the fulfilling of the city’s destiny. 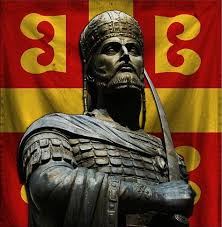 Constantine XI Dragases Palaiologos, was above all a soldier. He was the Despot of Morea from 1428 and as a skilled general, he led the Byzantine armies against Turkish attacks as well as annexing the Principality of Achaea and bringing the Duchy of Athens under temporary Byzantine rule. He succeeded his brother John VIII Palaiologos and in a civil ceremony in Mystra on 6 January 1449, he was given the title of Emperor of the Byzantine Empire. As he was far from Constantinople, he crowned himself with a smaller form of imperial headgear, the pilon, so that he could begin his duties as Emperor immediately. The traditional ceremony of crowning the emperors in Hagia Sophia in Constantinople was never carried out. 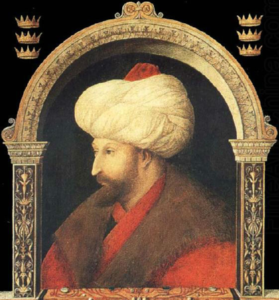 Constantine XI finally arrived in Constantinople on 12 March 1449 on a Catalan ship. The city had never fully recovered the 1204 Crusade attacks. It was a shadow of its former glory with many churches and palaces abandoned and in disrepair. The number of people living within the city walls had also dwindled to about 50,000. Furthermore, he had to deal with the imminent threat of an Ottoman attack by Sultan Mehmed II. In order to do this, he had to overcome the religious disunity within the empire by completing the union between the Orthodox and the Catholic churches that his brother John VIII had begun. He believed that this would enable him to have the military support when needed. However, many of the citizens of Constantinople opposed the idea of uniting the two churches.

Emperor Constantine XI Dragases Palaiologos could not avoid the final confrontation with the Ottoman forces. They entered the city on 29 May 1453 after a 53-day siege with an army of 80,000 compared to approximately 10,000 defending the city. Three days of pillaging followed. Although the Emperor was given the chance to hand over the city and thus save his life, his reply was: God forbid that I should live as an Emperor without an Empire. As my city falls, I will fall with it. Whosoever wishes to escape, let him save himself if he can, and whoever is ready to face death, let him follow me. In his final speech to his army and citizens before the onslaught he states: Present your shield and sword descendants of Greeks. And he ends by saying: Consider my brothers and comrades in arms, how the commemoration of our death, our memory, fame and freedom can be rendered eternal.

There are many legends connected with the Fall of Constantinople and Hagia Sophia. Many strange and ominous signs were observed before the final Ottoman assault. It is said that the partial lunar eclipse that occurred on 22 May 1453, represented a prophecy of the city’s fate. The icon of Virgin Mary, the city’s protector, was carried in procession through the city. However, it started to rain heavily and the icon slipped from its frame. Four days later, a fog blotted out the whole city. When the fog lifted, a strange light was seen hovering around the dome of Hagia Sophia, which some interpreted as the Holy Spirit that had been guarding the city, now leaving. The people felt that their end was near and they could no longer hold out against the invading Ottoman hoards. The Ottomans on the other hand, saw it as a sign of their victory. When the Ottomans entered Hagia Sophia, two priests that were saying the divine liturgy over the congregation, disappeared into the cathedral’s walls. They will appear again on the day that Constantinople returns to Christian hands.

Another legend states that Emperor Constantine XI was not killed in battle, but was rescued by an angel and turned into marble and hidden in a cave beneath the Golden Gate of the great walls that surrounded Constantinople waiting to be brought to life and to reconquer the city once more. He is referred to as the Marble King (Greek: Ο Μαρμαρωμένος Βασιλιάς). The Turks walled up the Golden Gate as a precaution because they believe that if he is resurrected, he will restore his fallen empire and drive them as far away as the ‘Red Apple Tree’ (Greek: Κόκκινη Μηλιά), their legendary homeland, an unidentified geographical area.

Constantine XI Dragases Palaiologos did not leave any heirs although he had married twice. His first wife was Theodora, sister of Carlo II Tocco, Italian ruler of Epirus. She died in November 1429 in Glarentza near today’s Killini on the west coat of the Peloponnese. His second wife was Caterina Gattilusio, daughter of Dorino I Gattilusio, the Genoese lord of the island of Lesvos. She died in 1442 on Lemnos on the way to Constantinople when she and Constantine were trapped there by an Ottoman naval blockade. It was later proposed that he marry Anna Notara (Greek: Άννα Νοταρά Παλαιολογίνα), the daughter of Loukas Notara, the last Megas Doux (grand duke) of the Byzantine Empire. However, the marriage never took place as she was forced to escape to Venice when Constantinople could no longer be saved.

Emperor Constantine XI Dragases Palaiologos died fighting as a hero and a matyr at St Romanus Gate. The legend of his one day returning is still alive today.