Once upon a time, our world was completely different. Civilisation as we know it today did not exist. It was a time when people still lived in caves, in darkness with only the bare essentials, if that.

And every day, in order to survive they would have to go out and hunt for food, gather seeds and collect their drinking water in make-shift containers. It was a miserable existence.

Until one day, the gods decided to help the people and the animals by sending two brothers, Epimetheus and Prometheus to give them the attributes and the skills that would help them survive and progress in this hard world. The names of people are very significant as it often affects the result of their actions as we shall see. Epimetheus, whose name means afterthought or hindsight, began to give some animals the ability to move quickly, others to have thick fur against the cold, others strength and sharp claws, and others the ability to fly. He almost forgot man because he had left him for last. He realised that he had given all the important characteristics to the other animals and there was nothing left for man. All he could do was give man some hair and nails, which were soft and sensitive. 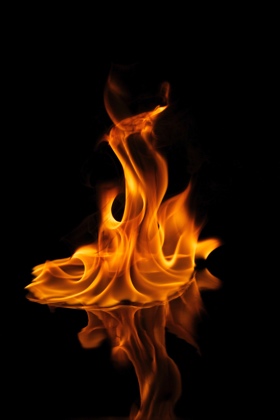 And because of this, man was not able to help himself in order to move out of the darkness and squalor that he was still forced to live in. When Prometheus, whose name means forethought, saw this he realised that he had to step in and complete his brother’s task. He had to give man the extra characteristics that he would need in order to evolve into a superior being who would no longer live in a cave, but would have the skills and capabilities to build a better future for himself and his children. Prometheus decided to give man something precious, something that had not been given to the other animals: a brain. Although man was now the smartest out of all the animals, he was still suffering. Prometheus therefore made the important decision to give man the holy fire, which he stole from Hephaestus, the god of fire and the working of metal and stone. Prometheus showed the people how to use fire not only to warm themselves, but to use it in the making of tools and how to use them to improve their lives.

And because of this, the wrath of the gods came down upon Prometheus. He had to be punished and made an example of for going against the will of the gods. He was therefore banished to the Caucuses Mountains and his arms and legs were chained to the side of the mountain. However, this was not enough punishment. Every morning, an eagle would come and eat his liver. As Prometheus, who was the son of the Titan god Iapetus and the goddess Themis was immortal, his liver was restored during the night. Prometheus endured this punishment for years as he knew that no one would go against the will of the gods and come to his rescue. 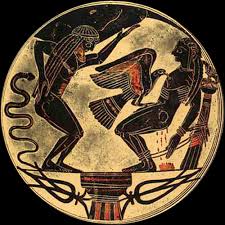 Until finally, someone dared. It was Heracles, son of Zeus and Alcmene who dared to go against the will of his father. When he saw Prometheus chained to the side of the mountain with his liver being eaten daily by the eagle, he pleaded with his father to allow him to unchain him and set him free. He had been punished enough. Zeus agreed. The point had been made. No one could go against the gods without paying for the consequences of their action. The first thing that Heracles did was to kill the eagle with his bow and arrow and then to break the chains that bound Prometheus to the side of the mountain. At last, after years of torture, he was set free.

And ever since that day, Prometheus has become a symbol of goodness towards mankind and the struggle of the people to overcome obstacles and to take the necessary risks no matter what the consequences may be. He suffered for the good of the people and by giving them fire, he gave them the power and the spark of human intellect and knowledge to overcome servitude and live as free men. The gods would no longer be able to assert their power over the people. They would be able to stand tall and determine their own future.