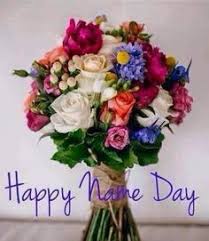 The Greek Orthodox Church has many Feast Days throughout the year with the people celebrating their name on that particular day. In Greece, Name Days are usually more important than birthdays and friends and relatives visit or phone to wish the person Hronia Pola, meaning Happy Name Day, Many years of health and happiness. There are also certain traditions connected with the celebrating of a Saint’s Day.

Many Feast Days of Saints are connected with the finding of their icon in a miraculous way and they are therefore honoured on that particular day. Saint Fanourios or Phanourios the Matyr is one such Saint (Greek: Άγιος Φανούριος). There is not a great deal of information as to where St. Fanourios was born and what he did in his lifetime. His icon was found on the island of Rhodes around 1500 AD on 27 August by a group of Turks when they had been sent to gather large stones to rebuild part of the wall that fortified the city. Outside the city walls was an old ruined church and as they were searching amongst the rubble, they found a number of old icons. 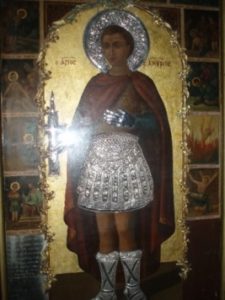 The icons were discarded by the Turks, but reclaimed by a group of monks who had been watching the whole scene. They saw that all the icons were in a state of decay except for one, which appeared new as though it had been painted the day before. The icon was of a man in a Roman soldier’s uniform. In his right hand he held a cross with a lit candle and in his left hand a spear. Around the perimeter of the icon were twelve events of martyrdom that the Saint suffered, which is basically the only source of information concerning his life. They also saw the name which spelled out Fanourios. Despite years of research, nothing more has been found about this Saint except the day that the icon was found, 27 August. This date has become the Feast Day or Name Day (Greek: Ονομαστική εορτή) of Saint Fanourios the Matyr.

The Archbishop of Rhodes petitioned the Patriarch in Constantinople to convene a synod to officially proclaim Fanourios a saint based on the martyrdom scenes. They showed Fanourios being stoned, on the rack, being slashed, behind bars, standing before a judge, tied to a frame, being burned with candles, tied to a post, thrown to wild animals, crushed by a boulder, holding hot coals, and lastly a de 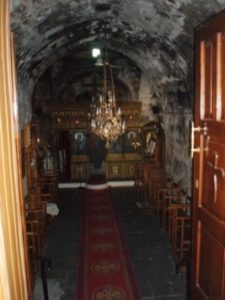 mon hovering against a background of flames. All these horrors showed that Fanourios was an indestructible instrument of God and this was sufficient evidence of his sainthood.

A church was then erected on the ruins of an older church, which is said to have been the Byzantine church of the Archangel Michael, in the old city of Rhodes to enshrine the holy icon. Since then, Fanourios, who for centuries had been lost in the ruins of a church, became the patron saint of things lost. Fanourios comes from the Greek word fanerono (Greek: φανερόνο), which means to reveal. To this day, people pray to Saint Fanourios if something has been lost, in matters of the heart or actions that should be taken. They also pray for the soul of his mother as she is said to have been a sinner and a harsh woman. When sharing the cake, they say: Lord have mercy on the soul of Agios Fanourios’ mother.

A Fanouropita or the ‘Lost and Found’ cake is baked to honour the Saint on the eve of his Feast Day and the cake is taken to the church the next day to be blessed. The Fanouropita is like a tama or votive (Greek: τάμα) towards the saint for his help in granting the wishes of the believer. After the church service, it is cut and shared with family and friends. It is a Lentern cake, referring to the forty days of fasting before Easter. Fanouropites can be made at any time of the year if something has been lost and help is needed to find it. In Crete, Cyprus, the island of Skiathos and in Florina, it is said that the sharing of the Fanouropita will help unmarried girls to find a husband.

The making of a Fanouropita is very easy. Below is a recipe for one. The ingredients have to be either seven or nine symbolising the sacred mysteries of the Greek Orthodox Church. The seven sacred mysteries are: Baptism, Confirmation, Confession, Holy Communion, Marriage, Ordination (Holy Orders), Unction (the anointing of the sick). The other two are the consecration of the Church and the burial of the dead. 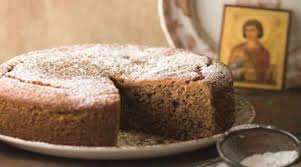 ½ kilo s. r. flour (keep a little to make sure that all is needed at the end)

Put everything into a bowl and mix to get a smooth, even mixture. Pour into a slightly oiled 20-25 cm round cake tin. Bake in preheated oven at 160 C for 40-45 minutes. Check that it has baked by putting a skewer in the middle of the cake. It should come out clean. Remove and allow to cool before cutting.