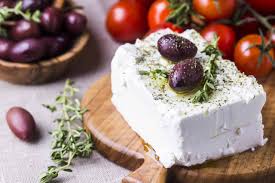 Greek Feta cheese was officially recognized as a ‘Protected Designation of Origin’ (P.D.O.) product by the European Union Commission in 2002. Recognizing the uniqueness of such a product is very important as Greek Feta cheese is completely different to any of the ‘feta’ cheeses made not only in other European countries, but in countries as far away as Australia. It is the ‘queen’ and the ‘white gold’ of the Greek cheeses because not only does it have a high consumption within Greece, it is also a major export product. Its quality and nutritional value cannot be questioned. 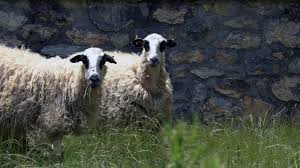 The difference between Greek Feta cheese and the ‘white cheeses’ made in other countries is the milk used in its making. Feta is made mainly from sheep’s milk, but sometimes up to 30% of goat’s milk can also be used, i.e. 70% sheep’s milk and 30% goat’s milk. In other countries, cow’s milk is mainly used. Although feta cheese is produced throughout Greece, the main areas are Epirus and Thessaly where in the past the Sarakatsani and Vlah communities were famous for the breeding of sheep and the utilization of the wool and milk. The island of Crete also has a long tradition of feta production as well as other islands such as Lesvos and Lemnos in the north Aegean Sea. The taste and appearance of the feta cheese depends on the area that it comes from. This is because of the landscape and the type of grasses and herbs available in the area and the breed of the sheep and goats. Feta is white in colour with a tangy taste. Its composition can be firm, medium or soft, and crumbles when cut.

The art of cheese-making goes back to 8th century BC, to ancient Greece, and is connected with Zeus, king of the Olympian gods. Milk was considered a sacred food by the people as Zeus was fed with the milk from the sacred goat Amalthea when he was hidden in a cave on Mt Ida in Crete. Rhea, his mother, hid him there in order to save him from his father Cronus, who would eat the new-born babies because an oracle had told him that one of his children would overthrow him. The oracle came true because when Zeus grew up, he overthrew his father in the war of the Titans and became king of the Olympian gods. Zeus had a son, Herakles, with Alcmene, a mortal. He wanted Heracles to be fed on the sacred milk so that he could also become immortal. One version of the myth has Zeus causing a cloudburst of milk, which covered the whole sky and in this way Heracles had as much milk as he wanted. Another version is that he placed the baby next to his wife Hera so that he could feed from her breast. However, Hera woke suddenly, saw the unknown baby and pushed him away. In both cases, the spurting milk formed the Milky Way or the Galaxy in which our Solar System is located. ‘Galaxias kyklos’ means ‘Milky circle’ (Greek: Γαλα = Milk). 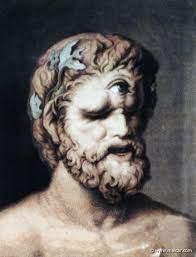 From there we go to the making of cheese. The Cyclop, Polyphemus (Greek: Πολύφημος) is said to have been the first cheese-maker. Polythemus means ‘abounding in song and legends’, ‘a man of great fame’. Cyclop (Greek: Κύκλωπας) means ‘Circle-eye’ or ‘Round-eye’ as it come from the word ‘kyklos’ meaning ‘round’. He was the son of the sea god Poseidon and the sea nymph Thoosa.

The Cyclops were an uncivilized group of shepherds living in isolated hilly areas. In Homer’s Iliad, the hero Odysseus on his way back to Ithaca after the Trojan War, encounters Polyphemus. When Odysseus and his men entered the cave of Polyphemus, the first thing they noticed was the smell and sight of the rich, white cheese made with goat and sheep’s milk in brine:
“We entered the cave, but he wasn’t there, only his plump sheep grazed in the meadow. The woven baskets were full of cheese, the folds were full of sheep and goats and all his pots, tubs and churns where he drew the milk, were full of whey. When half of the snow-white milk curdled he collected it, put it in the woven baskets, and kept the other half in a tub to drink,”

The ancient Greeks called this product ‘τυρί’ (cheese), which comes from the ancient Greek word ‘τύρος’ or ‘τυρεύω’, meaning to ‘coagulate’ or to ‘solidify’. During the Byzantine period it was referred to as ‘prosphatos’ (Greek: προσφάτος), meaning ‘recent’ or ‘fresh’. The Italian traveler, Pietro Casola, during his visit to Heraklion in Crete in 1494, described the production and storage of feta in brine. However, the actual use of the word ‘feta’ (Greek: φέτα) did not occur until the 17th century. It comes from the Latin word ‘fette’, which refers to the way the cheese was cut so that it could fit into the barrels. In Greek, it means ‘piece’ and has been systematically used from the 19th century to refer to this type of cheese that has been prepared in the same way for centuries.

Feta cheese is a part of the Greek diet and is also associated with the traditional way of life as a great part of the population lived in rural areas. Tourism has also helped to make more people aware of its culinary use, not only in the well-known Greek salad, which is a meal on its own, but in other recipes such as cheese pies, spinach pies, in stuffed tomatoes and capsicums, tyrokafteri in which chilly peppers are mixed with the feta cheese to form a spicy spread, strapetsiada (egg omellette with tomato and feta cheese) as well as eating it with a little olive oil and a sprinkling of oregao over it. Feta cheese is also very tasty with watermelon, rock melon and white grapes. It adds the extra tang to the fruit. Next time you visit Greece, make sure you try feta cheese in one of the above ways. I’m sure you will enjoy the taste. 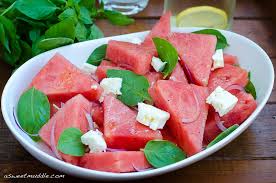