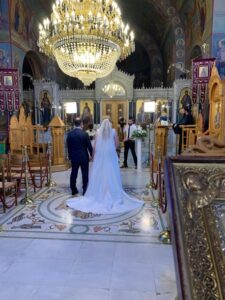 Weddings are always a special occasion not only for the couple that will be joined in matrimony, but also for the families and guests. Greek weddings have their own special preparations and traditions, and each part of the actual church ceremony has its own symbolism. It is not only the actual wedding, but the preparations leading up to the event that make Greek weddings special.

Although the basic wedding preparations are much the same for all Greek weddings, there are small differences from one area to the other and from the mainland to the various Aegean and Ionian islands as well as Crete. Many customs are no longer practiced, especially in the cities, but others can still be seen in the villages. One such custom is the taking of the dowry from the bride’s home to her husband’s home, usually on donkeys, in a formal procession accompanied by the local musicians and the whole village. Another very interesting tradition that is very rarely practiced is the singing of the bridal song while the bride is being dresses, which again may be different from area to area. It’s usually a very emotional moment as the words are full of meaning. A verse from such a song from the island of Agios Efstratios, near the island of Lemnos in the north Aegean, is below. It is a very symbolic song full of emotions that the translation does not do it justice.

A few days before the actual wedding, the bridal bed would be made up by the single female friends of the bride with white sheets and pillows that would have been embroidered by the bride. Flower petals, money and koufeta or sugar-coated almonds are strewn on the bed to ensure love, prosperity and fertility. Also, a baby is placed on the bed to guarantee the fertility of the bride and depending on whether the baby is a girl or a boy, this will determine the gender of the couple’s first baby. 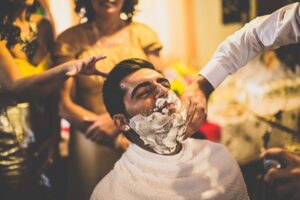 On the day of the wedding, the groom is shaved and dressed by his koumbaro (bestman) and his friends to show their solidarity. The bride is dressed by her koumbara  (bestwoman) and her friends. The names of the single female friends are written on the sole of the bride’s shoe and the name that is still discernible after the celebrations means that she will be next to marry. The throwing of the bride’s bouquet has been influenced by Western customs. The bride is taken to the church by her father and handed over to the groom, who is waiting for her at the steps of the church with his koumbaro, family and friends. The groom kisses the hand of his father-in-law to show his respect.

The actual wedding ceremony consists of three parts. The first part is when the priest blesses the rings and places them on the right finger of the bride and groom. The best man swaps the rings three times. Then the ‘stefana’ or golden crowns, joined by a white ribbon, are placed on the heads of the couple. The best man passes them over the heads of the couple three times. This symbolizes unity and the Holy Trinity – the Father, the Son and the Holy Ghost. The ceremony continues with the sipping of red wine three times, which symbolizes the blood of Jesus Christ. Before the dance of Isaiah, the priest says, “And the wife shall revere her husband”. At this moment, the bride steps on the groom’s foot to show that she is independent and that she will not be ‘governed’ by him. It is considered a fun moment between the couple, and everyone waits for this moment. During the dance of Isaiah, the priest holds the bible and leads the couple around the table three times, while the pageboy holding a lit candle walks in front. The best man follows holding the ribbon of the ‘stefana’. At this point, rice and sugar-coated almonds (koufeta) would be thrown over the couple, to symbolize fertility and the bitter-sweet aspects of life respectively. However, today, the throwing of the rice is done outside the church to save the extra work of cleaning. 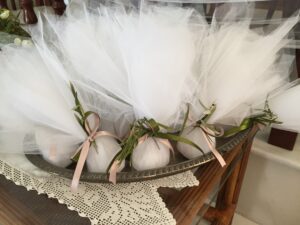 As the guests leave the church, single girls hand them a bomboniera of sugar-coated almonds, which have an odd number, to symbolize the indivisible power of their marriage. Often, the bomboniera is placed on the table where the reception is to be held to simplify the procedure. After a sumptuous wedding dinner, the bride and groom get up to dance, the signal for everyone to join in the Greek dancing. This lasts until the early morning hours.

There are several traditional times of the year when weddings cannot take place as they revolve around religious holidays such as the period of Epiphany, the Holy Week of Easter, the Twelve Days of Christmas, the Lent season, the first two weeks of August when the Dormition of Virgin Mary is celebrated and certain other important religious dates.

Na zisei i nifi kai o gambros, koumbaros kai koumbara… (May the bride and groom as well as the best man and best woman live a happy and prosperous life). This is the wish that all the guests make towards the couple and the best man and best woman as well as wishing the couple many off-springs. And of course, wishing their single friends that they marry soon. Kai sta dika sou (And to you).