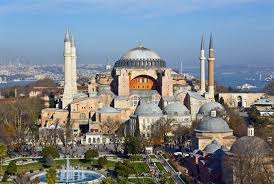 Hagia Sophia (Greek: Αγία Σοφία) or the Church of Holy Wisdom in Constantinople, today’s Istanbul in Turkey was the centre of Christianity for over a thousand years from its construction in 532-537 AD to the fall of the Byzantine Empire on 29 May 1453 to Sultan Mehmed II. It also effectively marked the end of the Roman Empire, which dates back to 27 BC, a total of 1,500 years. Under the Ottoman Turks it was used as a mosque for 500 years until it was turned into a museum in 1934 when Kemal Attarturk took power and wanted to create a secular republic on the ruins of the Ottoman Empire, thus changing the outlook of Turkey and therefore modernising her along Western lines. 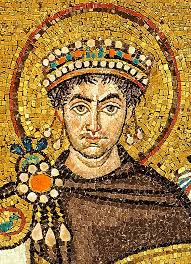 It is said that Constantine I built the first church of Hagia Sophia in 325 AD on the foundation of a pagan temple. His son Constantius II consecrated the church in 360 AD. It was damaged by fire in 404 during a riot, but rebuilt and enlarged. The church was again burnt during the Nike riots of January 532 against the Emperor Justinian. In order to atone for the slaughter of thousands of citizens, Justinian decided to build the church again on a bigger and grander scale. He wanted a basilica that represented the strength and riches of the Byzantine Empire. He therefore gave this assignment to the architect and geometer Anthemius of Tralles and Isidorus of Miletus, a mathematician and scientist. For this unique structure, materials came from all over the empire. 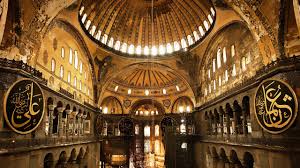 The basic plan of the church is a square with three aisles separated by columns with galleries above and marble pillars rising up to support the dome. The main dome has a 32-metre span, supported by four triangular pendentives, which support the weight of the dome without massive pillars taking up the internal space. There are two smaller domes on either side. The walls above the galleries and base of the dome are pierced by windows, which in the glare of daylight obscure the supports and gives the impression that the canopy floats on air. The structure is built of brick and mortar without the use of wood so that it could no longer be burnt down. The structure produced a ‘unified and most remarkable harmony’. Procopius of Caesarea, a Byzantine historian wrote: The Church is distinguished by indescribable beauty, excelling both in its size, and in the harmony of its measures, having no part excessive and none deficient; being more magnificent than ordinary buildings, and much more elegant than those which are not of so just a proportion. The church is singularly full of light and sunshine; you would declare that the place is not lighted by the sun from without, but that the rays are produced within itself, such an abundance of light is poured into this church….’

The last service to be held in Hagia Sophia was on the evening of 28 May 1453, in which the Emperor Constantine with representatives of both the Latin and Greek churches took part along with the nobles and ordinary people of the city: the night before the final, full-scale assault by the Ottomans which took place on 29 May 1453 after a 53-day siege. Constantinople fell to Sultan Mehmed II. He turned the basilica into a mosque, covering most of the Orthodox-themed mosaics with Islamic calligraphy with the name of their prophet and founder of Islam, Muhammed, as well as the names of other prophets. Panels or medallions were also hung on the columns in the nave. The mosaic on the main dome, believed to be an image of Christ, was also covered by gold calligraphy. A mihrab (a niche indicating the direction of Mecca, the holy city for all Muslims) and a minbar or pulpit was added as well as a minaret for the muezzin to call the people to prayer. Three other minarets were added over the centuries not only for religious purposes, but to also fortify the structure following a number of earthquakes. 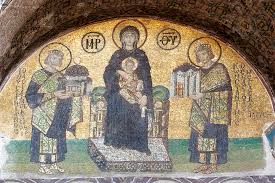 Hagia Sophia has functioned as a museum from 1934 after the Byzantine Institute of America had been given permission by Mustafa Kemal Ataturk in 1931 to conserve and restore a large part of the wall mosaics depicting not only religious scenes, but also the various emperors that had ruled the Byzantine Empire. However, the church was poorly looked after until UNESCO made it a part of the Historic Area of Istanbul and inscribed it on its World Heritage List in 1985. Hagia Sophia is referred to as as an architectural masterpiece and a unique testimony to interactions between Europe and Asia.

With the decision taken by the Turkish President Recep Tayyip Erdogan to change the status of Hagia Sophia from a museum to a mosque, the iconography will be covered by special curtains and special lighting. Special prayer mats will be laid on the floor for those that come to prayer, which will be five times a day. Visitors will have to wait their turn. This change will not only destroy whatever iconography has been saved, it will also mean that any cultural activity will no longer be possible by historians and specialists. The first call to prayer under the new regime will take place on Friday 24 July 2020. A sad day for civilisation and for democracy. Many people believe that Hagia Sophia has only been loaned to house their faith (the faith of Islam) because just as the Parthenon embodies classical Greece, St Peters stands for the Catholic Church and Rome, the Eiffel Tower characterises Paris as well as so many other landmarks around the world, Hagia Sophia is the symbol of Byzantium and the Eastern Orthodox Church. The name and use of Hagia Sophia cannot be usurped. 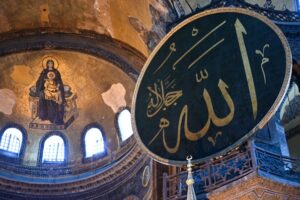