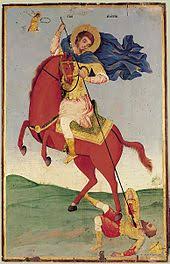 Hagios Demetrios of Thessaloniki (Greek: Άγιος Δημήτριος της Θεσσαλονίκης) is also known as the Holy Great Martyr Demetrios the Myroblyte (the Myrrh-Gusher). He is the patron saint of Thessaloniki, which is celebrated on 26th October, the date of his death in 306 AD.

Demetrius was born to pious Christian parents of aristocratic background in Thessaloniki in 270 AD, which at that time was a part of the Roman Empire. He served in the Roman army and rose to rank of tribune. It was a time when Christians were being persecuted for their beliefs, the most severe being the Diocletianic Persecutions between 305-311 AD. Demetrios’ Christian beliefs led him to organise secret meetings in the underground tunnels of the city converting other young men to Christianity. He was caught and taken to Maximian, the Emperor of the Eastern Roman Empire, who had him imprisoned. One of his students, Nestoras (Greek: Νέστορας), challenged the notorious gladiator Lyaeus (Greek: Λυαίο), who is said to have killed many Christians and was a favourite of the Emperor, to a fight in the arena. Nestoras visited the imprisoned Demetrios and asked for his blessings before the fight. Nestoras killed the gladiator and the Emperor was so angered that he ordered his beheading and the death of Demetrios with spears. 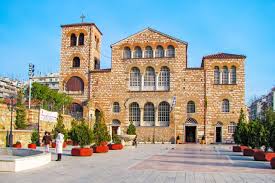 Demetrios was buried where he had been killed and a small church was built there to honour him in the early 4th century AD. Soon after, a strong myrrh-scented liquid started to emit from his relics. This is why he has also been given the name ‘Myroblyte’ (Greek: Μυροβλήτης) or myrrh-flowing. This small church was replaced a century later by a three-aisled basilica, which was eventually reconstructed into a five-aisled basilica in 629-634 because of the repeated fires that had gutted the church. This is the form that has survived up to today. The Church is now part of the site of the Palaeochristian and Byzantine Monuments of Thessaloniki and has been on the list of World Heritage Sites by UNESCO since 1988. 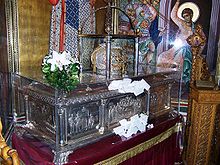 After the growth of his veneration as a saint, the city of Thessaloniki suffered continuous attacks from the Slavic groups that were penetrating the Balkans. Demetrios was credited with the many miraculous interventions in the defence of the city, which stopped the invaders from entering. Therefore, he came to be regarded as a military martyr. His icon shows him on a red horse killing the gladiator Lyaeus with his spear, although he was actually killed by his disciple, Nestor.

Besides being venerated as a military martyr, during the Middle Ages he was also venerated as a patron of agriculture, peasants and shepherds in the Greek countryside. It is said that this role was inherited from the ancient Greek goddess of agriculture, Demeter, when her rites and roles were gradually transferred to the Christian tradition.

The feast day of Hagios Demetrios also coincides with the most important day in the history of modern-day Thessaloniki: the city’s liberation from Ottoman rule. After nearly five centuries of suppression, the Turkish Army Commander Hasan Tahsin Pasha signed the protocol surrendering Thessaloniki to the advancing Greek Army during the First Balkan War. It is therefore a double celebration: celebrating the feast day of Hagios Demetrios, the patron of Thessaloniki as well as its liberation from Ottoman rule.