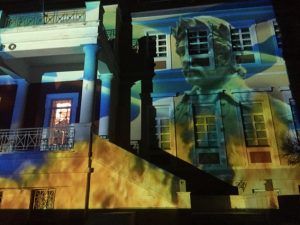 A special function was organised at the Apostolopoulou Cultural Centre of the Municipality of Tripoli Arcadia to honour a prominent Greek of the Diaspora, Ioannis Giannopoulos, who was born in Arcadia, Morea. He is honoured because he left his mark on the educational history of America when he established the first school in the township of St Augustine, Florida. He showed that ‘education (Greek: παιδεία) is above everything else.’

According to the records of the Roman Catholic Diocese of Saint Augustine that date from 1594 to 1821, Ioannis Giannopoulos, who was a carpenter by trade, was sent to the Spanish colony of Florida along with a group of over 1,400 Greek and Italian men in the 1760’s. They were indentured workers who were sent to the New World to work on the indigo plantation of Andrew Trumbull in New Smyrna Florida. Ioannis Giannopoulos was only twelve years old at that time. The workers suffered ill treatment, starvation as well as an extension of their years of servitude. After over nine years of hardship, more than four hundred men were able to escape and walked the 70 miles to the township of St Augustine where they settled.

Ioannis Giannopoulos married and had a son, George, and a daughter, Maria. He was concerned about the education of his children and therefore turned the first floor of his two-story wooden house into a ‘schoolroom’ where he taught not only his children, but also the rest of the children of St. Augustine. His daughter, Maria, followed in his footsteps and also became a teacher and taught in the school. As the school grew, other teachers were hired. Besides the other subjects, Greek was also taught. 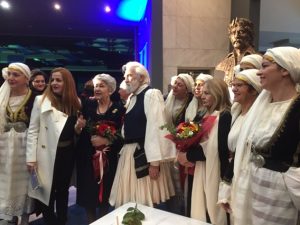 The audiovisual event in memory of Ioannis Giannopoulos was organised by the architect/artist Dimitri Talaganis on Wednesday 22 January 2020. The bust of Ioannis Giannopoulos, sculptured by Dimitri Talaganis, will travel to St. Augustine at the beginning of March 2020 and will be placed outside the old wooden schoolhouse. This heritage building is recognised as the oldest schoolhouse of North America. It is a symbol of a hard-working person who wanted to pre 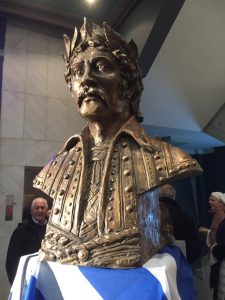 serve his language and his customs in order to pass them on not only to his children, but to all the generations that would follow. The event was entitled: Godspeed! Ioannis Giannopoulos travels after 250 years for the second time to America for a conversation with history. Ioannis Giannopoulos is a link in the great chain of the Diaspora that has kept the flame burning, which led to the great event of national rebirth. The event was the Greek Revolution of 1821 against Ottoman oppression.

It was an evening filled with music from the local choir ORPHEAS, the Music School of Tripolis, the soprano Eleni Bakopoulou, the well-known singer of traditional Greek songs Giota Vey. The use of percussions added a note of formality and emotion to the function. Traditional dancing groups were also present in a variety of Greek traditional dress as well as men in ‘foustanela’ (Greek: φουστανέλα). Representatives from the Greek-American Educational Federation and Cultural Societies, a Greek-American Senator, the Bishop and local Greek officials were also present.

The bust of Ioannis Giannopoulou will be placed outside the old wooden schoolhouse in St. Augustine, Florida. The schoolhouse has been declared a heritage building and is recognised as one of the oldest schoolhouses in North America. It has become a symbol of the hard work and perseverance of Ioannis Giannopoulos, who left his mark on the educational history of St. Augustine with the establishment of the school in his house. 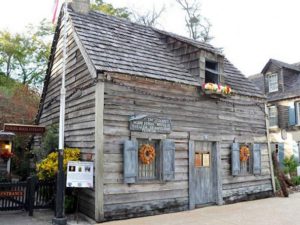