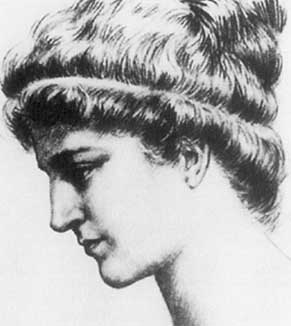 Hypatia was the daughter of the Greek mathematician, Theon Alexandricus. She was born in Athens in 350 AD but died in 415 AD in Alexandria, Egypt.

Alexander the Great founded Alexandria, in 331 BC. However, he did not live to see the city that bore his name as he died in June 323 BC at the age of 33 in Babylon, Iraq. After his death, Alexander’s empire was divided among his generals. General Ptolemy became the ruler of Egypt and made Alexandria the capital city of the country instead of Memphis, which had been the capital city up to then. Ptolemy respected knowledge and the sciences and so Alexandria soon became the centre of learning and culture in the ancient world as a result of the Museum and the famous library that had been built there. Scholars from all over the known world came to learn, to research and to teach.

The word ‘Museum’ is originally from the Ancient Greek word Museion (Greek: Μουσεϊον), which refers to a place or temple dedicated to the Muses, the goddesses of literature, science and the arts in Greek mythology. They were considered the source of knowledge. 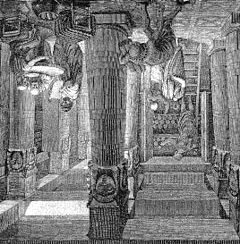 Theon Alexandricus was the head of the Museum. Hypatia studied under her father’s guidance and helped him in his mathematical research. He raised his daughter as if she were a son, not wanting her to have the traditional role assigned to women, a role that had to do with domestic duties, marriage and raising children. She lived in an environment of thought and dialogue. She became head of the Platonist school, which encouraged logical thinking and mathematical studies. She also taught philosophy. She contributed to astronomy with the charting of celestial bodies as well as science with the invention of the hydrometer, which is used to develop the relative density and gravity of liquids. In mathematics she is noted for her work on conic sections, introduced by Apollonius, which divided cones into different parts by a plane, which developed the ideas of hyperbolas, parabolas and ellipses.

Egypt at the time of Hypatia was a part of the Eastern Roman Empire. She lived during a period of time when Christianity began to dominate and rioting between religions was commonplace. Hypatia was considered to be a pagan as she followed the Hellenistic religion. She was referred to as a ‘valiant defender of science against religion’. She was murdered during one of the riots that had been started because of the conflict between Orestes (the Prefect of Alexandria) and Cyril (the Bishop of Alexandria) as to who would have control – the State or the Church. She was stripped and beaten to death and then her body was torn apart and burned.

On the streets of Alexandria, a mob led by Peter the Lector brutally murdered the philosopher, Hypatia.

Of the little that is known about Hypatia, the following account by Socrates Scholasticus, which was completed sometime in the decade before the death of Theodosius II in AD 450, is the best and most substantial.

There was a woman at Alexandria named Hypatia, daughter of the philosopher Theon, who made such attainments in literature and science, as to far surpass all the philosophers of her own time. Having succeeded to the school of Plato and Plotinus, she explained the principles of philosophy to her auditors, many of whom came from a distance to receive her instructions. On account of the self-possession and ease of manner, which she had acquired in consequence of the cultivation of her mind, she not infrequently appeared in public in presence of the magistrates. Neither did she feel abashed in coming to an assembly of men. For all men on account of her extraordinary dignity and virtue admired her the more. Yet even she fell a victim to the political jealousy, which at that time prevailed. For as she had frequent interviews with Orestes, it was calumniously reported among the Christian populace that it was she who prevented Orestes from being reconciled to the bishop. Some of them therefore, hurried away by a fierce and bigoted zeal, whose ringleader was a reader named Peter, waylaid her returning home, and dragging her from her carriage, they took her to the church called Caesareum, where they completely stripped her, and then murdered her with tiles. After tearing her body in pieces, they took her mangled limbs to a place called Cinaron, and there burnt them. This affair brought not the least opprobrium, not only upon Cyril, but also upon the whole Alexandrian church. And surely nothing can be farther from the spirit of Christianity than the allowance of massacres, fights, and transactions of that sort. This happened in the month of March during Lent, in the fourth year of Cyril’s episcopate, under the tenth consulate of Honorius, and the sixth of Theodosius [AD 415].”

Some of Hypatia’s sayings below give ‘food for thought’.

‘Life is an unfoldment, and the further we travel the more truth we comprehend. To understand the things that are at our door is the best preparation for understanding those that lie beyond.’

‘Fable should be taught as fable, myth as myth, and miracles as poetic fancies. To teach superstitions as truth is horrifying. The mind of a child accepts them and only through great pain, perhaps tragedy can the child be relieved of them.’

Hypatia’s life has been made into the very successful film, Agora (Greek: Αγορά or market place), which was the gathering place in ancient Greece where people met to discuss important issues. The film shows Hypatia’s struggle to save the knowledge of classical antiquity from destruction during a time of social unrest and religious turmoil. The role of Hypatia is played by Rachael Weisz. 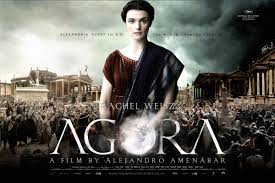