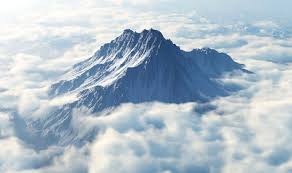 The ancient Greeks worshiped the Pantheon of Gods on Mt Olympus, with Zeus as king of the twelve gods and Hera as their queen. However, they also worshiped minor gods that were just as powerful and on whom the gods relied. Two such ‘minor’ gods were the twin brothers Hypnos or Sleep and Thanatos or Death (Greek: Ύπνος και Θάνατος). They had many similarities, but just as many differences. 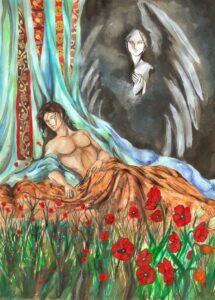 Hypnos and Thanatos have been with us from the beginning of Time. Their mother was Night or Nyx (Greek: Νύχτα) and their father was Erubus (Greek: Έρεβος), which means ‘deep darkness, ‘shadows’. He personified darkness just as Nyx personified night. As you can understand, with such parents, the sun did not see much of them. According to Hesiod, the Sun never saw Hypnos or Thanatos because Thanatos lived in Tartarus, far down from the surface of the earth whereas Hypnos is said to have lived in a cave on the island of Lemnos and came out only at night following the trail of his mother Nyx.

These two minor gods may not have lived among the gods on Mt Olympus, they were nevertheless, very powerful. Many think that out of the two brothers, Thanatos had more power, but this is not so. Everyone avoided Thanatos whereas they welcomed Hypnos. It was not only the mortals that had to sleep, but the gods as well. Hypnos would use a branch to sprinkle water taken from the River Lethe or ‘Forgetfulness’ (Greek: Ποταμός Λήθη) over the people or the gods in order to put them to sleep. This symbolises the fact that when someone falls asleep, they forget everything. This is described in the Iliad, the epic poem composed by Homer around 8th century BC, where Hera pleaded with Hypnos to make her husband Zeus fall asleep so that she would be free to influence the outcome of the war with Troy in favour of the Greeks. ‘Put to sleep the shining eyes of Zeus under his brows as soon as I have lain beside him in love. I will give you gifts.’

When Zeus’ son, Sarpedon, who fought on the side of Troy, was killed by Patroclus, there was a struggle for the possession of his body. His body was rescued by the god Apollo, who was not only the Sun god, but also a god of healing. In the Iliad, Hera speaks to Zeus about Sarpedon’s fated death. ‘But after the soul and the years of his life have left him, then send Thanatos to carry him away, and Hypnos, who is painless, until they come with him to the countryside of broad Lykia where his brothers and countrymen shall give him due burial with tomb and gravestone.’ Lykia (Greek: Λυκία) is now a part of Turkey. This episode can be seen on the famous Euphronios Krater. Euphronios was a well-known painter and potter and he create 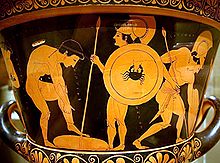 d this red-figure pottery bowl used for mixing wine with water around 515 BC. On the front of the Krater, Sarpedon’s body is being carried by Hypnos and Thanatos, while Hermes watches. On the reverse side is a group of Athenian youths arming themselves. The krater had originally been found by tomb raiders in an Etruscan cemetery near Cerveteri, Italy, in December 1971.

It was sold to a private collector who is turn sold it to the Metropolitan Museum of Art in New York. However, in 2008 it was repatriated to Italy and is now in the Archaeological Museum of Cerveteri.

Hypnos is depicted as a young man with wings on his shoulders or brow. He can also be seen holding a horn with sleep-inducing opium, a poppy stem or a branch dripping water from t 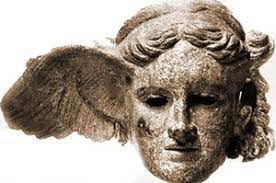 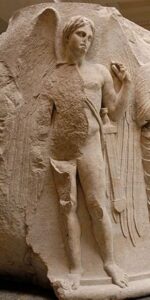 r Lethe. Thanatos is also depicted with wings sprouting from his shoulder blades, a sword sheathed at his belt and often holding a torch upside down, which signifies a life extinguished. He appears to humans when the time allotted to them by the Fates has expired and he carries them to Hades.

Although people try to outwit Thanatos, it is very difficult to do so either in mythology or in real life. However, Thanatos was defeated twice in mythology: once by Heracles, who saved Alkestis, the wife of king Admetos of Pherai, who had offered her life in exchange of her husband’s. As Heracles was an honoured guest in their house at that time, he offered to repay the king’s hospitality by fighting with Thanatos for Alkestis’ life. Heracles won and Thanatos was forced to leave empty-handed. The episode is expressed in the play Alkestis by Euripides. Heracles states: I must save this woman who has died so lately, bring Alkestis back to live in this house and pay Admetos all the kindness that I owe.

The second time, Thanatos was tricked by Sisyphus, the king of Corinth, who wanted a second chance at life. He was able to chain Thanatos and escape from Hades. This episode is expressed in Hesiod’s Theogeny in which he states: Sisyphos, son of Aiolos, who by his wits came up even from Haides . . . No one else has ever contrived this, once Thanatos’ dark cloud has enveloped him and he has come to the shadowy place of the dead.