Much can be said ab 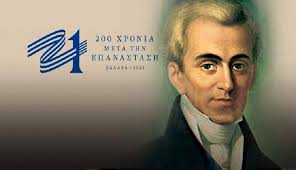 out the life and career of Ioannis Kapodistrias (Greek: Ιωάννης Καποδιστριας). He was the Foreign Affairs Minister for Alexander I of Russia during the most important part of European history as it was straight after the Napoleonic Wars (1803-1815). And most important of all, he was the first Governor of Greece when part of Greece was freed from Ottoman suppression after the success of the Greek Revolution, which began officially on    25  March, 1821.

Reference is usually made to the political and diplomatic career of Ioannis Kapodistria, However, there is also the human side of his character that showed his patriotism and his love towards his country Greece. It can be said that he lived his whole life based on ethics that he never violated, and he died upholding these ethics.

He was born on the Ioannian island of Corfu on 11 February 1776. Both his father and mother came from noble families and Kapodistrias himself inherited the title of Count. He studied medicine, philosophy and law at the University of Padua in Italy and at the age of 21, he began his medical practice as a doctor in Corfu, treating the poor without asking for money.

Kapodistrias left Corfu in 1807 and two years later entered the services of Alexander I of Russia. His career as a diplomat that would influence the future of Europe as well as Greece had begun. Although Kapodistrias represented Russian interests in Europe, he never forgot Greece and its right for independence. His position brought him in contact with many rich and influential people and in this way he was able to make them aware of the plight of the Greek people. The creation of a philhellene movement began. In 1814, he founded the ‘Philomuse Society’ in Vienna under the patronage of Tsar Alexander I of Russia. It was an educational organization promoting the education of young Greeks in various European countries as Ioannis Kapodistrias felt that education was the key to the governing of the Greece once it had gained its independence.

Ioannis Kapodistrias was frugal. According to Baron Charlotte de Sor, when Kapodistrias lived in Geneva he rented two simple rooms for himself and for his servant. It cost him 30 franks per month or 6 franks per day for the two men, as they both had to restrict their expenses. All the money that was collected from fundraising and from donations by rich acquaintances and friends went towards helping his compatriots in Greece. As he often said, “I gave everything before asking for your help for my brothers.” What he wanted above all, was the freedom of his country.

Ioannis Kapodistrias dominated the European political and diplomatic scene during his seven-year service as the Russian Foreign Minister, playing a major role in the political development of Europe. Many prominent Europeans expressed their respect and their admiration for his upright character, his intelligence and charisma as well as his kalokagathia (Greek: καλό κάγαθος), or gentlemanly personal conduct, as stated by the German politician O. Hoetzsch.

There were however those that were jealous of his influence and his political position and who were ready to make negative remarks about him. Prince Klemens Metternich, Foreign Minister for Austria, was one such person. He was jealous of Kapodistrias’ success in all aspects of diplomacy as he was one of the few people who were able to rival Metternich’s decisions. He stated that, Kapodistrias is not a bad man, but honestly speaking he is a complete and thorough fool, a perfect miracle of wrong-headedness…He lives in a world to which our minds are often transported by a bad nightmare.

Ioannis Kapodistrias’ passion for the freedom and development of Greece prevented him from having a family of his own. His love for Roxandra Sturdza, of Greek nobility from Moldavia and First Lady to Empress Elizabeth, wife of Alexander I of Russia, was never declared. Her feelings towards him were never expressed either. However, she was inspired by Kapodistrias’ ideals and became an avid supporter of philhellenism. She helped in the founding of schools and orphanages for the Greek minority in Odessa as other parts of Europe and worked towards the Greek cause.

Ioannis Kapodistrias became the First Governor (Greek: Πρώτος Κυβερνήτης) of the independent Greek State in 1827. Unfortunately, his work in making Greece a free and independent country was never completed. His life was cut short when he was assassinated by Konstantis and Georgios Mavromichalis on the steps of St Spyridon Church in Nafplion on Sunday 27 September 1831.

This year, Greece is celebrating its two hundred years of independence from Ottoman suppression. Ioannis Kapodistrias has a place of honour in these celebrations with many events being organized in his name.