In order for Jason (Greek: Ιάσων) to claim his right to the throne of Iolcus in Thessaly, from his uncle Pelias, who had usurped it from his father, Aeson, he had to bring back the Golden Fleece (Greek: Χρυσόμαλλον δέρας) from the area of Colchis on the Black Sea. Jason took up the challenge and organised the expedition that is known as the Argonautic expedition (Greek: Αργοναυτική εκστρατεία), taking the name from the ship ‘Argos’, which was named after the boat builder, Argus. 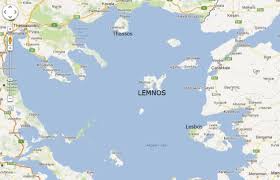 Jason’s companions were the heroes of Greece such as Orpheus, Heracles, Meleager, Tiphys and many others. The heroes were all of divine origin as in most cases they had either a father or a mother who was one of the immortal gods or goddesses. After sacrificing to the gods, they set sail for Colchis and the retrieval of the Golden Fleece. The first stop of many on this journey of adventure was Lemnos (Greek: Λήμνος), the 8th largest island of Greece in the north Aegean Sea and opposite the Dardanelles, the Straits that lead to the Black Sea and Colchis. 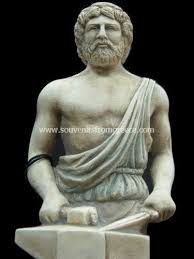 It is the the island of Hephaestus, the Olympian god of metallurgy, fire, blacksmiths, technology, forges and volcanoes. Hephaestus (Greek: Ήφαιστος) is the son of Zeus and Hera. One version of the myth has it that Hera cast Hephaestus from Mount Olympus because of his deformity – he had a ‘shrivelled foot’ – and he landed on Lemnos. Another version is that Hephaestus tried to rescue his mother, Hera, from the advances of Zeus. Zeus became enraged and flung him from the heavens, landing on Lemnos where he was brought up by the Sintians, an ancient tribe of the island. They taught him the art of metallurgy.

At the time of Jason’s visit to the island of Lemnos, only women lived there. Their queen was Hypsipyle (Greek: Υψιπύλη), the daughter of Thoas and Myrina. Thoas was the son of the god Dionysus and Ariadne, the daughter of the Cretan king Minos. Myrina (Greek: Μύρινα) was a queen of the Amazons. The capital city of Lemnos takes her name.

During the reign of Hypsipyle the goddess Aphrodite cursed the women as they had neglected her shrine. They were inflicted with a foul smell that repelled their husbands. Therefore, the men did not approach them and began to have relationships with the female slaves that they had taken on their raids in Thrace. This angered the Lemnian women and so one night they took revenge by killing them all. However, queen Hypsipyle saved her father, Thoas (Greek: Θόαντα), by putting him into an oarless boat and setting it adrift in the Aegean Sea. He was carried to the island of Oinoie (Greek: Οινόη) also known as Sicinus (Greek: Σίκινος), named after the son from the union of Thoa and the nymph Oinoie.

When Jason and the Argonauts arrived at Lemnos, Aphrodite lifted the curse and so the women were able to again unite with the men. From the union of Jason and Hypsipyle twin sons were born: Euenus and Nebrophon (Greek: Εύνηος και Νεβρόφονος). After Jason left Lemnos to continue his journey towards Colchis, the Lemnian women found out that queen Hypsipyle had saved her father, Thoa. She was therefore dethroned and forced to leave Lemnos. She and her sons were taken by pirates and sold to Lycurgos, the king of Nemea. Because of her noble status, Lycurgos put her in charge of his son, Opheltes (Greek: Οφέλτη) or Archemorus (Greek: Αρχέμορου) as he was called after his death. 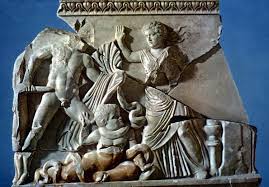 A prophecy said that Opheltes should not be put on the ground before he was able to walk. When the army from the city of Argos under the leadership of seven officers set out to attack Thebes, they passed through Nemea. They met Hypsipyle and asked her to show them the spring of water as they were thirsty. Hypsipyle placed Opheltes on a patch of wild celery and led the soldiers to the spring. In her absence, the serpent guarding the spring devoured the baby. The leader of soldiers saw this as a bad omen 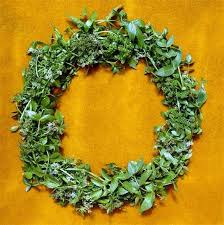 for their expedition against Thebes. He named the child Archemorus (Greek: Αρχέμορο) meaning the ‘beginning of bad luck’ (Greek: αρχή κοτοτυχιών). To honour the dead child, the Nemean Games were set up and the prize was a wreath of wild celery. King Lycurgos wanted to take revenge on Hypsipyle, but she was saved by Adrastus, the leader of the Argive officers. 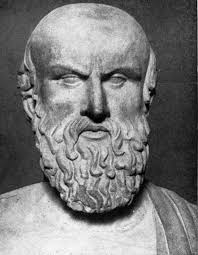 The well-known play by Aeschylus, Seven Against Thebes (Greek: Επτά επί Θήβας) outlines the battle between the Argive army led by Polynices and the army of Thebes led by Eteocles and his supporters as to who would control Thebes. Polynices and Eteocles were brothers. It is the third play in an Oedipus-themed trilogy performed in Athens in 467 BC, which won first prize in the City Dionysia competition.