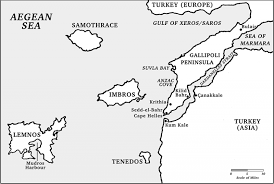 The history and the mythology connected with the islands of the north Aegean such as Lemnos and Imbros go back to antiquity. Lemnos was freed from Ottoman rule and became a part of the Greek State on 8 October 1912, during the First Balkan War. However, Imbros, which was a Greek island from antiquity, now belongs to Turkey under the 1923 Treaty of Lausane when the Greek forces were defeated by the Turkish forces in the Greco-Turkish War of 1919-1922, also referred to as the Asia Minor Catastrophe.

As both are very close to each other and opposite the Hellespontos or Dardenelle Strait as it is called today, they have always been an important part of the north Aegean area. Lemnos (Greek: Λήμνος) is the eighth biggest Greek island with an area of 476 sq m. Imbros (Greek: Ίμβρος) is much smaller with an area of 279 sqm. Both islands played an important role in World War I and the Gallipoli campaign against Germany and its allies, one of which was Turkey. The Hellespontos is a narrow strait of water that connects the Aegean Sea with the Sea of Marmara and the Black Sea. It is the natural border between Europe and Asia. 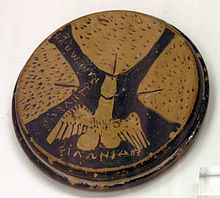 In antiquity, the islands of Lemnos and Imbros were sacred to Hephaestus (Greek: Ήφαιστος), god of blacksmiths, metallurgy, artisans, fire and volcanoes. He was the son of Zeus and Hera, but was cast off Mount Olympus by Hera because of his deformity and landed on Lemnos, where his cult was formed. Ancient coins have been found on Imbros showing an ithyphallic Hephaestus, which usually symbolised fertility and cultural implications associated with the male sexual organ. Both islands were also Athenian colonies whose settlers retained Athenian citizenship.

The Dardenelle Strait (Greek: Δαρδανέλλια) or Hellespontos (Greek: Ελλησποντος) is also connected with Greek mythology. The name Hellespontos is connected directly with the myth of Phrixus and his twin sister Helle (Greek: Φρίξος και Έλλη) and the golden ram. They were the children of King Athamas of Boetia and Nephele, a cloud goddess as her name suggests (Greek: Νεφέλη, νέφος). When Nephele died, King Athamas married Ino. She wanted to get rid of Phrixus and Helle so that her son would one day be king of Boetia. Ino ordered the women to roast the seeds that were to be sown so that they would not grow. When the farmers saw that their crops could not grow, they were desperate and so asked the oracle for advice. Ino bribed the men who were sent to the oracle, and told them to say that the oracle asked for the sacrifice of Phrixus and Helle. King Athamas had to agree to this in order to save the people from starvation. As the twins were about to be sacrificed, their mother sent a flying golden ram to carry them far away.

Nephele told them not to look down, but Helle did and she lost her balance and fell into the sea below, where she drowned. Since then, that particular area has been called the Hellespont (Greek: Ελλής + πόντος or Sea of Helle). Phrixus continued flying and finally reached Colchis. 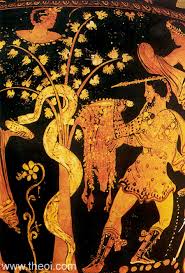 Colchis (Greek: Κολχίς) was a region in the Southern Caucasus, an area where modern-day Georgia is located. There he was welcomed by King Aeetes, son of Apollo, the sun god and Perseis, an Oceanid. Phrixus married Chalciope, the king’s daughter. In order to show his gratitude, Phrixus sacrificed the ram to Zeus and offered the golden fleece to Aeetes, who took it and placed it in a garden to be guarded by a never-sleeping dragon. The golden fleece (Greek: Χρυσόμαλλο δέρας) represented wealth, authority and kingship, which leads to the next myth of Jason and the Argonautic Expedition. 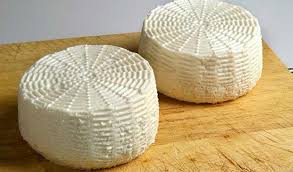 Lemnos and Imbros are very important strategically due to there geographic position as they are opposite the only sea passage, the Hellespontos or Dardenelles, which leads from the Aegean Sea to the Black Sea. The word Lemnos is said to come from the Homeric word ‘lyion pedion’ (Greek: λήιον πεδίον), which means ‘sown fields’, whereas ‘lyis’ (Greek: ληίς) means ‘flocks of sheep’. The combination of these two words gives the island its name, i.e. an island that produces large quantities of grain crops as well as having flocks of sheep, which produce a large variety of dairty products. As Lemnos has large areas of flat land, it was the granary of the area from antiquity up to now. Its tradition in animal husbandry produces well-known cheeses such as the feta cheese known as ‘Kalathaki Limnos’ (Greek: Καλαθάκι Λήμνος / kalathaki means basket), a protected product (PDO). 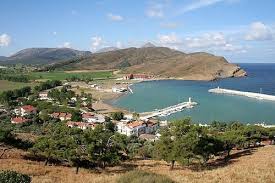 Imbros on the other hand, is made up of low hill areas and small valleys with abundant quantities of running water. Farming, vineyard areas and goat herds are the main occupations of the people on the island. Up to 1940, 92% of the population on Imbros was Greek. The Treaty of Laussane in 1923 gave special autonomous administrative powers to the Greek population on the island, but unfortunately, they were never adhered to. The majority of Greeks were forced to leave and at the moment there are only about 300 Greek people on Imbros.