No other poet captiva 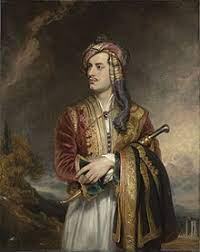 ted and scandalised his contemporaries more than Lord Byron. His intelligence, his wealth, his beauty and his unconventional attitude towards life caught the attention of all those around him. His reckless and daredevil traits and his heroic death characterised his way of life. His poetry, which uses language and description that rouse the thoughts and emotions outside normal experiences, express the Romantic era, a movement which originated in Europe at the end of the 18th century. He was one of the best-known philhellenes who participated actively in the Greek War of Independence against the Ottomans Empire, eventually                                                         losing his life in Messolonghi on April 19, 1824.

George Gordon Noel Byron was born with a clubbed right foot in London on January 22, 1788. He became the sixth Baron Byron of Rochdale when his great uncle died in 1798. He inherited Newstead Abbey, the family seat in Nottinghamshire. He enjoyed this new role and was proud of his coat of arms, which consisted of a mermaid and chestnut horses over the motto Crede Byron (Trust Byron).

Byron spent his early years in Aberdeen, and was educated at Harrow School and Cambridge University. Between 1809 and 1811 he toured various Mediterranean countries including Greece where he visited the monuments of the ancient Greek civilization. He immediately fell in love with the country. He also met Ali Pasha, the Ottoman governor of Ioannina. He then went on to Turkey noting the differences in the culture. When he returned to Athens, he stayed at the Capuchin Monastery by the Choragin Monument of Lysicrates in Plaka. He wrote the poem The Curse of Minerva in which he attacks his compatriot Lord Elgin for pillaging the Parthenon sculptures. He also visited the Temple of Poseidon in Sounio. His name can still be seen on one of the columns. His travels through Greece made him aware of the contrast between the glory and might of ancient Greece and its present situation under Ottoman rule. On his return to England he published his works in 1812, which included Childe Harold’s Pilgrimage, a narrative poem describing his feelings and his experiences during his travels. He become famous overnight. He stated: If I am a poet, the air of Greece has made me one.

His poetry was only one aspect of his versatile and manifold activities. He became active in politics, played cricket (despite being handicapped), he was an exceptional swimmer, a marksman, a swordsman and a boxer. He enjoyed the company of women as well as other men. He was full of action and wanted to be part of the action. He stated that the purpose of poetry is to complete life and not just to comment on it. If the poem does not make a person feel alive when we are reading it, then it is not worth the paper it is written on. 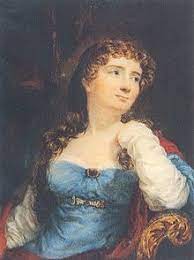 Soon after his return to England he married Annabella Milbanke, a well-educated woman on 2nd January 1815. She bore him a daughter, Ada. However, the marriage did not last long and a year later they were separated. The scandal that followed and the ever-increasing debts forced Byron to leave England. He travelled through Europe and settled in Italy. In the meantime, the Greek War of Independence against Ottoman rule had begun in March 1821.

In 1823, while living in Genoa, Byron agreed to actively support the Greek struggle for independence. He travelled to the island of Kefalonia, which was under British rule at that time, and spent over 4,000 pounds to refit a Greek fleet. He was able to reach Messolonghi in January 1824. He joined forces with Alexandros Mavrokordatos, a Greek politician, giving him money for the needs of the revolution. He also helped in concluding the first revolutionary loan between the Greek fighters and British philhellenes, as he was a member of the London Philhellenic Committee. 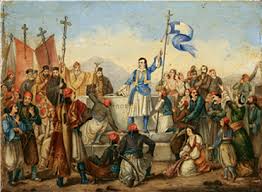 He formed a group of 30 philhellene officers and 200 men for an attack on Lepanto or Nafpaktos as it is known today. However, the attack did not take place and soon after Byron fell ill. Blood-letting worsened his condition. He caught a violent cold with a high fever that eventually led to his death on 19 April 1824. His death brought sorrow not only among the Greek freedom fighters who considered him as one of their heroes, but in England as well. It must be noted that the township of Messolonghi had undergone two sieges before the third and final siege. The first siege was from October 1822 until December 1822; the second from 20 September to 20 November 1823; the final siege between 15 April 1825 and 10 April 1826 when the Ottomans returned with a stronger force and naval support cutting off food and ammunition supplies to the men, women and children that were defending the township. This led to the heroic attempt to exit the town. Out of the 7,000 people that tried to escape, only 1,000 made it safely. All those that were left in the township were either slaughtered or taken as prisoners to be sold as slaves. The defeat of the Greeks and the barbarity of the Ottoman forces led the Great Powers of England, France and Russia to take an active part in the Greek cause.

It can therefore be said that the death of Lord Byron did not go in vain. He died heroically for the freedom of a country that was not his own. He lived his life to the fullest and also died as a poet writing his last, but most significant poem on the day of his 36th birthday, 22 January 1824. The name of the poem is: On This Day I Complete My Thirty-Sixth Year.

Lord Byron is revered as a hero in Greece. The Byron House is the centre for the Messolonghi Byron Society, dedicated to Lord Byron’s life and poetry. In the Garden of Heroes in Messolonghi, a statue of the poet is above the place where his heart is buried. According to his will, his heart was buried in Messolonghi and his body taken to England and buried at the Church of St Mary Magdalene in Hucknall, Nottinghamshire. King George I of Greece placed a marble slab over his grave. Byron’s daughter, Ada Lovelace, was buried beside him. Since 2008, Greece has honoured Byron’s participation in the Greek War of Independence by declaring 19th April as ‘Byron Day’. Greek communities around the world honour this day with special events and poetry competitions. Dionysios Solomos, Greece’s national poet who wrote the Greek National Anthem, composed an ode in Byron’s memory. 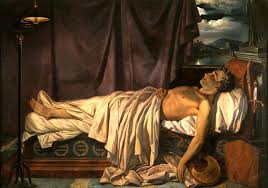 For a moment, Liberty,
Let the war, the bloodshed rest;
Hither come and silently
Over Byron’s body weep.