The British poet and philhellene, Lord Byron, wrote his last poem, On This Day I Complete My Thirty-Sixth Year, on 22 January 1824, less than three months before his death in Messolonghi, Greece. He was taking part with the Greeks in their war for independence after 400 years of Ottoman rule. It is one of his most personal poems, which meditate on his life.

At the beginning of the poem, Byron expresses grief as he is becoming older and no longer worthy of love. However, the Greek struggle for freedom and independence gives him inspiration and motivation. He intends to be a part of it and seeks to find glory through a brave death for a noble cause. Although he was not able to fulfill his desire because the planned attack against the Turkish-held fortress of Lepanto that he was to lead did not take place, his sacrifice was not in vain. As the British historian David Brewer states, his presence in Greece and his death there drew to the Greek cause not just the attention of sympathetic nations, but their increasing active participation.

On This Day I Complete My Thirty-Sixth Year

‘Tis time this heart should be unmoved,

Since others it hath ceased to move:

Yet though I cannot be beloved,

My days are in the yellow leaf;

The flowers and fruits of Love are gone;

The worm—the canker, and the grief

The fire that on my bosom preys

Is lone as some Volcanic Isle;

No torch is kindled at its blaze

The hope, the fear, the jealous care,

The exalted portion of the pain

But wear the chain.

But ’tis not thus—and ’tis not here

Such thoughts should shake my Soul, nor now,

Where Glory decks the hero’s bier,

Or binds his brow.

The Sword, the Banner, and the Field,

Glory and Greece around us see!

The Spartan borne upon his shield

Was not more free.

Awake (not Greece—she is awake!)

Awake, my Spirit! Think through whom

Thy life-blood tracks its parent lake

And then strike home!

Tread those reviving passions down

Indifferent should the smile or frown

If thou regret’st thy Youth, why live?

The land of honourable Death

Is here:—up to the Field, and give

A Soldier’s Grave, for thee the best;

Then look around, and choose thy Ground,

And take thy rest. 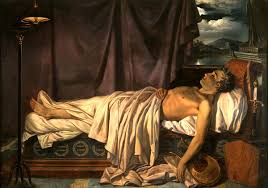