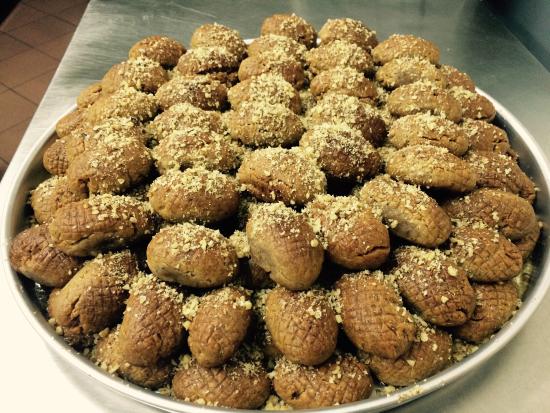 Melomakarona!! A traditional Greek Christmas sweet that drips with honey as the name implies, sprinkled with ground walnuts mixed with cinnamon and cloves. Meli means honey and makaron is a type of pasta dough. It comes from the ancient Greek word makaria. In ancient Greece, they would serve the makaria after a funeral service to honour the deceased. The word makarios is still used today to refer to a person who has found ever-lasting happiness. The word makaritis is used to refer to a person who has passed away. When honey syrup was added, the word became melomakarono (singular), melomakarona (plural). Honey (Greek: μέλι) is considered a symbol of well-being (Greek: ευζωίας) and creativity (Greek: δημιουργίας).

Melomakarona are also called phoenikia (Greek: φοινίκια). The name phoenikia is used mainly in the Aegean islands, which may be connected with the Phoenicians, an ancient sea-faring people that lived along the coast of Asia Minor and basically in today’s Lebanon. 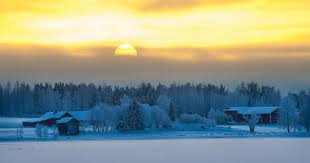 Traditions are connected with the past. Therefore, besides the connection of the makaria being given at a funeral, they are also connected with the worshipping of the Sun in ancient Greece. The celebrations honoured the winter solstice, which occurs around 20-22 December each year. The word solstice comes from the Latin solstitium, which means sun stands still. The winter solstice in the northern hemisphere is when the sun reaches its most southerly point. After that, the night begins to shorten and the day to lengthen.

Below is one of the many recipes for Melomakarona or Phoenikia.

Ground walnuts to sprinkle on top of melomakarona after they are baked.

Mix the oils and the sugar well. Dissolve the soda in the orange juice and add to the mixture. Add the cinnamon, cloves and orange zest. Add the semolina. Add the flour until the mixture is soft and smooth. Cover and allow to rest for 15 minutes.

Roll out a piece of dough about the size of a walnut in the palm of your hands and give it an oval shape about 1 cm thick and place on baking tray. Bake at 180 degrees in a preheated oven for about thirty minutes or until the bottom side is golden brown. Allow to cool.

Prepare the syrup by placing in a pot the sugar, water, honey, cinnamon, cloves, and orange or lemon peel. Bring to boiling point skimming if needed. Lower heat to preserve the syrup warm. Dip the cookies in the syrup for a few seconds and then with a slotted ladle remove into a platter. Ground the walnuts until they are fairly fine and mix them with 1 teaspoon of ground cinnamon and ½ teaspoon of ground cloves.

Place them on a wide platter in layers, sprinkling the walnut mixture on top of the melomakarona so that they do not stick with each other.