Children form small groups and go from house to house on the morning of New Year’s Eve singing the New Year carols. In the past, they were given nuts and sweets such as melomakarona or kourambiedes.

The cutting of the Vasilopita or St. Basil’s cake (Greek: Βασιλόπιτα) is connected with St. Basil, the first Bishop of Caesarea in Cappadocia in 370 AD. It is said that an excessive tax was imposed on the people of Caesarea during a period of famine. The citizens were forced to give whatever money and pieces of jewellery they had in order to pay this tax. St. Basil denounced this decision and the Emperor repented. However, as it was difficult to return the pieces of jewellery to the rightful owner, St. Basil decided to have small cakes baked into which he put a piece of jewellery. In this way, everyone was able to get back what they had given.

The Vasilopita is cut just after midnight with the coming of the New Year. The first piece is cut for Jesus Christ, the second for St. Basil, and then the rest are shared according to age starting from the eld

est to the youngest. Whoever has the coin will be lucky for the rest of the year. The Vasilopita is decorated in many different way as each area has its own customs.

The cutting of the Vasilopita is not only connected with St. Basil. It goes back to ancient Greece and the offering of a ceremonial bread (Greek: άρτος) to the gods. These celebrations took place in agricultural areas and were connected with the celebrations of the Thalisia and Thesmoforia (Greek: Θαλύσια, Θεσμοφόρια), in honour of the goddess of the hunt, Artemis, daughter of Zeus and Lito. Later, these ceremonies were in honour of the goddess Dimitra, goddess of agriculture and the god Dionysus, god of wine and celebrations. 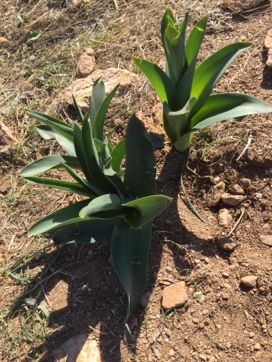 The hanging of the Squill Bulb or Onion on the front door of the house on New Year’s Eve is also an ancient Greek tradition. The ancient Greeks believed that it protected them from evil, catastrophe, the evil eye and sickness. It can be used to make poison, but it is also used as a medicinal plant. Hippocrates, the ‘Father of Medicine’ used it to treat jaundice, convulsions and asthma. Pythgoras, the ancient Greek philosopher from the island of Samos, hung it outside his front door against the evil spirits and as a symbol of good health and rejuvenation. The bulb is long-lasting and even if it is in a forgotten part of the house, it will sprout leaves at this time of the year. In this way, it begins its new life cycle. 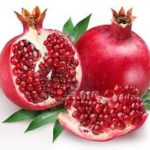 Another plant that is connected with good luck and long life is the pomegranate. It is smashed on the threshold of the front door on New Year’s Day. It is a sign of prosperity, fertility, eternity, abundance, good fortune and regeneration due to the large number of seeds that it has. 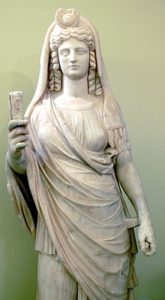 The ancient Greek goddess Hera the goddess of marriage and Venus the goddess of beauty had the pomegranate as their symbol. Persephone, the Queen of the Underworld is also connected with the pomegranate. Hades, who had abducted Persephone and taken her to the Underworld agreed for her to return to earth in order to revive the withered and frozen earth for six months of the year. To make sure that she would return to him, Hades gave her a few pomegranate seeds to eat so that she would not forget him. She therefore remembered to return to her husband and her kingdom after completing her mission and after being reunited with her mother Dimitra, goddess of agriculture.