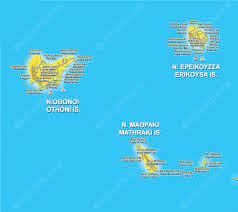 Othonoi (Greek: Οθωνοί) is a dot on the map that over the last few years has become better known as a holiday destination. It is part of a group of islands referred to as the Diapontian Island complex (Greek: Διαπόντια Νησιά) in the Ionian Sea. Besides Othonoi, the other larger islands are Ereikoussa and Mathraki followed by Diakopo, Diaplo, Karavi, Lipso, Plaka Trachia and the uninhabited Albanian island of Sazan. 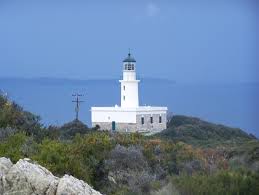 In the 3rd century BC, the island was referred to as “Othronos”. Other names were “Fidonis” (Snake Island) because of the many snakes that were said to have invaded the island. Later, the Italians referred to it as “Fanos” (Lamp) because of the lighthouse situated on the island, and which has now become the trademark of the island. It was built in 1872 on Cape Kastri, the northern most tip of the island. It will be celebrating its 150 years of existence in 2022. The one flash of white light every ten seconds can be seen 18 nautical miles away. It was damaged during World War II by bombs and remained unlit from 1941 until 1954. The kerosene beacon was then restored and served until 1985 when it was electrified. 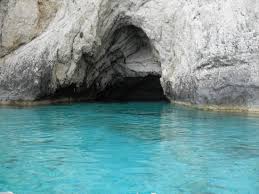 According to Greek mythology, it was also the island of the nymph Calypso (Greek: Καλυψώ), which means ‘to hide or conceal’ (Greek: καλύπτω). Her parents were the Titan Atlas and the Oceanid nymph Pleione. Calypso wove her magic charms over the sea travelers that came by keeping them on her island for as long as it pleased her. Odysseus, king of Ithaca and hero of the Trojan War did not escape her charms. She kept him on the island for seven years hoping to make him her immortal husband. In the end, she had to allow him to continue his journey to Ithaca and to his wife Penelope. In Homer’s “Odyssey” the island was known as “Ogygia”. The cave on the south-western part of the island that bears her name seems to want to confirm this legend.

The island went through continuous periods of conquests such as the Franks in the 11th century and the Venetians in the 12th century. In 1383, the use of the Diapontian Islands was given to the knight Theodore Skaliti by Charles III of Naples. The islands were often attacked by pirates from Algeria and the Barbery coast of north Africa. The notorious Turkish pirate Hayreddin Barbarossa attacked Othonoi in 1537 massacring the inhabitants after a long battle. 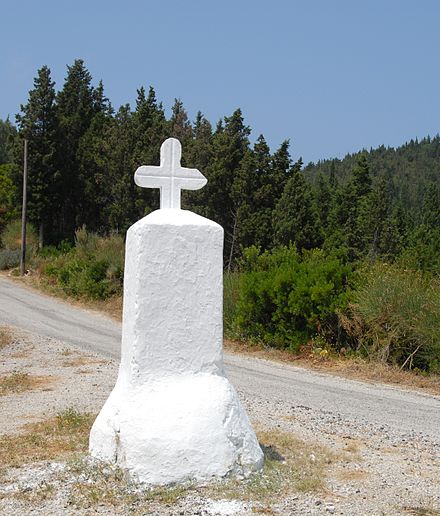 In the Stavros district at an altitude of 217 m. a white stone cross stands in commemoration of those that died in that event. After the destruction of the Turkish fleet in 1571, there was an increase in the population as people from the island of Paxos, from Ioannina, Parga and the region of Epirus settled in Othonoi and the two smaller islands of Ereikoussa and Mathraki. In 1815, the island was taken over by the British as part of the colonization of the Ionian Islands. Eventually, in 1864, the Ionian Islands, including the Diapontian islands, passed into the sovereignty of the new independent Greek State after the 1821 War of Independence against the Ottoman Empire.

In the 19th century, the Othonoites acquired cargo ships that sailed throughout the Mediterranean Sea and as far as the Black Sea area. They developed economically and thrived. At one stage the island had a population of 900 involved not only in shipping, but also in agriculture and fishing. After WWII there were two schools with approximately 50 children in each. However, the island was not able to support the population and so began a period of migration to countries such as America, Argentina, Australia, Germany, Canada as well as Corfu and Athens. The islands were slowly deserted, and the schools closed with the permanent population numbering a few hundred.

Over the past few years, with the appearance of tourism, things are looking more promising as young people are returning to the island to renovate the family house, occupy themselves with agricultural products and open new businesses. The visitors have been so impressed with the beauty of the island and the quality of life that many have bought holiday houses there.

The two schools are in good condition and one of them has opened and welcomed several new pupils. Hopefully, the other will be turned into a folklore museum exhibiting items from the everyday lives of the local people and thus relating the history of the island over the centuries. It is not only the locals that will benefit from the new developments taking place, but the visitors will also be able to take pleasure in an island paradise close to home. 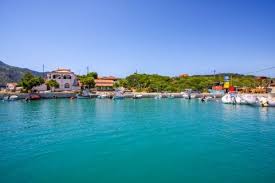