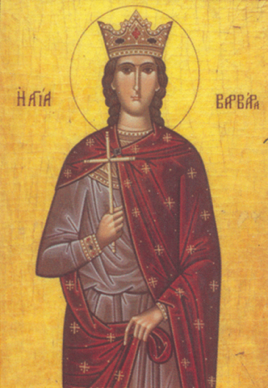 Saint Barbara (Greek: Αγία Βαρβάρα) celebrates her Name Day or Feast Day on 4th December. She is considered to be a protector of children as well as the patron Saint of the Greek and Cypriot Artillery. In the past, it marked the beginning of winter and the end of the work done on the farms. Also, the houses would be cleaned in readiness for the feast of Saint Barbara as well as Christmas. Over the years, various traditions have arisen connected with this saint.

Saint Barbara was born around 300 AD in Heliopolis of Syria, present day Baalbek, Lebanon. It was a time of persecution for those that believed in Christianity. Her father, Dioscouros, was a rich and influential Greek. He was a pagan and an enemy of the new religion. He came up with the plan of poisoning the Christians in the area by ordering the bakers and the grocers to put poison in their products. Barbara found out about this and warned the Christians not to buy any food but to cook whatever they had at hand. She told them to cook whatever they had such as a few seeds of wheat, some broad beans, raisins etc. This is how the cooking of the stew ‘Barbara’ (Greek: Βαρβάρα) came about. 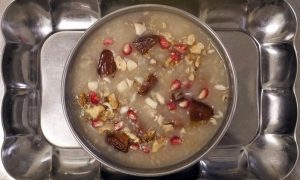 Over the years, it became the custom to serve ‘Barbara’ stew as part of the religious celebrations of Saint Barbara. This tradition originated in Thrace and Eastern Macedonia, but has slowly spread to other parts of Greece. As Saint Barbara is also the protector of children against illnesses such as chicken pox, a disease that was prevalent at that period of time, the ‘Barbara’ stew ‘sweetens’ the Saint. Even the Greek Muslims in the area celebrate this day with a feast known as ‘Asoure’ (Greek: Ασουρέ). There are nine ingredients in the stew: wheat, almonds, walnuts, pomegranates, raisins, cinnamon, sesame, tahini and chopped apples or other fruit. It’s a sweet as well as a meal.

Although her father tried to stop her from practising the new religion, Barbara would not change her mind even after being tortured. In the end, her father beheaded her himself. At that moment, a flash of lightning struck him and flames consumed his body. This is why, she is also the patron saint of the Greek and Cypriot Artillery. The flash of lightning symbolises the firing and the sound of the artillery.

Another interesting custom is that of the lit boats that are sent sailing in the lake in the township of Drama, the capital of Thrace. According to tradition, when the Turks overran Drama in 1380, they demolished the Church of Saint Barbara in order to build a mosque. However, before this could be done, the area flooded and covered the church. This was considered a miracle and Saint Barbara became the patron saint of Drama. Therefore, on the eve of her Feast Day, they would light a candle placed on a piece of wood and set it sailing in the direction of the sunken church. Also, Saint Barbara is the protector of young girls, guarding them against gossip and evil. They would light a candle in her honour and put it on a piece of wood making a wish for a good marriage. Today, the candles are put on small sailing boats. They are called ‘boats of wishes’ or ‘boats of prayers’ (Greek: βάρκες με ευχές). 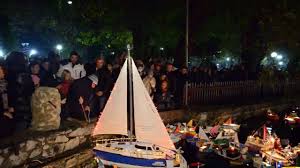