The salep, which is made from the tubers of the orchid family Orchis mascula, has been used from antiquity for the toning of the immune system of patients during their convalescence. Orchis comes from the Ancient Greek word meaning testicles because of the appearance of the two tubers that form the roots of the plant. These tubers are starchy, but nutritious. They are ground into flour, which is then mixed with water or milk and made not only into beverages, but also sweets. 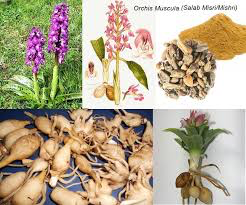 Salep (Greek: σαλέπι) was consumed in ancient Greece and later in the eastern Mediterranean area as it had been taken there by the ancient Greek settlers that had colonized the area. The use of salep continued during the Ottoman Empire and was introduced into Great Britain and France during the 15th century as it was cheaper than coffee or tea. It was not only used for medicinal purposes such as dysentery, dry cough and high temperature, but also as an aphrodisiac. The use of this herb was believed to help women give birth to male children. That is why in the local Greek tradition it is known as sernikovotano (Greek: σερνικοβότανο). A local saying also states that this brew gladdens not only the stomach, but also the soul (Greek: ευφραίνει και το στόμα και την ψυχή). In ancient Rome salep was referred to as satiria or priapistic because of its aphrodisiac properties that this plant gives. In Middle Age England, the witches of the time used the fresh bulbs or tubers to entice the true love and the dried bulb to quench illegal passion.

The scientific name of salep, Orchis mascula is connected with the ancient Greek myth of Orchis, the son of a nymph and a satyr. He was one of the followers of Dionysus or Bacchus, the Ancient R 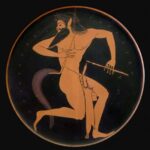 oman name for the god of wine and merrymaking as well as fertility, theatre and religious ecstasy.

During the festivities in honour of Bacchus, Orchis commited sacrilege by attempting to take advantage of a priestess. His punishment was to be transformed into a lean and modest plant, but with the roots resembling the male genitals, thus the use of his name. Theophrastus, an ancient Greek botanist and biologist was the first to use the scientific name Orchis.

The ancient Greek doctors of medicine Hippocrates and Asklepius also knew the herb salep and used it in their treatment of patients. The roots of these orchids consist of two bulbs side by side. The smaller bulb is usually picked for use so that the bigger bulb continues to feed the flower so that it does not become extinct. The bulbs are dried and ground into powder. The sticky texture of the salep brew helps to strengthen the immune system of the sick, heal wounds in the stomach and the lining of the intestine as well as relieving severe coughing. Spices such as cinnamon, nutmeg, ginger and chilly pepper that are added to the brew help to warm a person in cold weather more than a cup of tea. 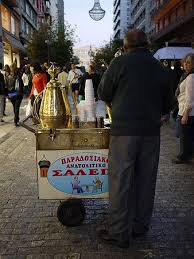 The starch gives the energy and the mental alertness that is needed for a person to function properly. Other properties such as calcium and phosphate are also found in the salep flour mixture. Salep has very few calories (approximately 15 calories if drunk without sugar and about 30 calories with sugar), which helps those on a diet.

Salep has become popular again today, not only for its taste, but also for its therapeutic qualities. It can now be bought in packets as an instant drink. 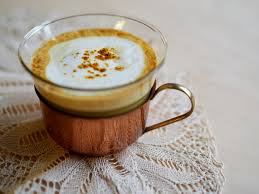 1 cup of water or milk

Put the water or milk into a small pot and bring it to the boil. In a small bowl, mix the sugar or the honey and salep powder. Add a few tablespoons of the hot water or milk onto the salep powder and whisk until smooth. Reduce the heat when the milk boils and pour the mixture into the pot. Keep stirring while it simmers until it thickens. The consistency should be creamy. You can serve it in cups or mugs with some cinnamon, nutmeg or ginger on it.