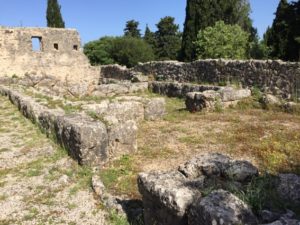 The most famous sanctuaries in ancient Greece that foretold the future were those of Dodoni, Delphi and Acheronda. However, there are certain differences between them. With the first two, the pilgrim asked the priest for his prophecy, whereas with Acheronda, the pilgrim comes in contact with the souls of the dead. He comes in contact with the beloved person that has passed away in order to be given the prophecy. The priest plays the role of the mediator between the living and the dead. That is why it is referred to as the Nechromanteio of Acheronda. Nechro means death and manteio means oracle or prophecy (Greek: Νεκρομαντείο του Αχέροντα).

The ancient Greeks believed that chasms in the earth, caves and deep gorges were the openings to the Underworld, to the kingdom of the dead. Their souls were like shadows, a spectrum of the dead. When the soul was freed from the body of the dead, it gained superhuman powers and it could foretell the future. These souls were often dangerous as they would try to take revenge for their death, especially if it was an unexpected one. Therefore, those that wanted to make contact with the spirits of the dead had to undergo a period of preparation, both mentally and physically. They had to undergo a special diet, pray and give offerings of milk and honey, wine and water, and especially offerings of blood from animals that had been sacrificed. For example, according to Homer, Odysseus’ mother, Anticlear, did not recognise him until she had drunk the sacrificial blood. She had died because of her grief for him, longing for his safe return from Troy. 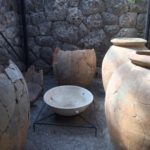 The sanctuary dates back to about 8th century BC, but it flourished between the 3rd and 2nd century BC. The main entrance leads to three separate rooms used as bedrooms. A labyrinth leads to the underground chamber dug in the rock with an earthen floor held up by 15 arches. This is the dark palace of Persephone (Greek: Περσεφόνη) and Hades (Greek: Άδης). There is also a central court 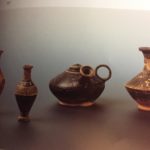 yard and storeroom areas. The pilgrims are prepared both spiritually and bodily in an atmosphere of semi darkness. They eat pork, broad beans, barley bread and oysters – food connected with the dead. They also drank milk, honey and water. They underwent purges of purification and magic. They listened to the chanting of  the priests and the saying of prayers towards the subterranean demons. They bathed in order to cleanse themselves so that they remained unharmed by the contact with the spectra of the dead. 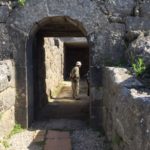 It is not clear as to how long this period of preparation lasted. In the end, when the crucial time came, the pilgrim would be led by the priest-guide along the eastern corridor where he would carry out the sacrificial ritual. In the corridor, he would sacrifice a sheep in a dugout area. Remnants of burnt animal bones have been found. Next, he would be led through the labyrinth, which made the pilgrim feel that he was wandering through the dark corridors of Hades. The labyrinth had three iron-framed entrances with large metal nails, the same number as the entrance to Hades. In the labyrinth the pilgrim gave offerings of barley meal. At the end of the labyrinth is the main chamber where the pilgrim threw a stone as a symbol of something abhorrent, and emptied on the stone floor the offerings (Greek: χοές) to the gods of the Underworld, Hades and Persephone, who dwelt in the underground chamber at the end of th 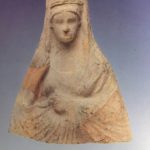 eir journey. During this journey, the priest-guide would be continuously chanting and calling upon the spirits of the dead, dark Ekati and terrifying Persephone 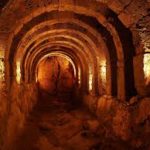 (Greek: τη νυχτερινή Εκάτη και τη φοβερή Περσεφόνεια). The pilgrim is mentally predisposed to see what he expects to see, i.e. the spirits of the dead.

The site, which was identified in 1958 by the Greek archaeologist Sotirios Dakaris, dates back to the 3rd – 4th century BC. It was destroyed by the Romans in 167 BC. The ruins cover an area of 72 square feet, with 11-foot-thick walls and a subterranean chamber. The diggings at the top of the hill were first carried out between 1958-1964 and later between 1976-1977 under the auspices of the Greek Archaeological Society. The Necromanteio was found to be buried under the monastery of Saint John Prodromou built at the beginning of the 18th century. 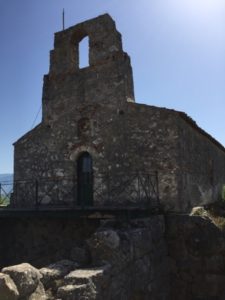