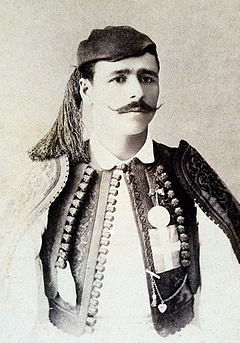 Spiro Louis was the winner of the Marathon race in the first modern Olympic Games that were held in Athens Greece from 6-15 April 1896. It was a vision that became a reality for the French philhellene, Pierre de Coubertin, the creator of the International Olympic Committee (IOC).

When Spiro Louis (Greek: Σπυρίδων – Σπύρο Λούης) entered the Panathenaic Stadium or Kallimarmaro (it is made entirely of marble), he was cheered by thousands of spectators. Everyone was proud that a Greek was able to win such a symbolic race, especially as he was not an athlete. He was a poor water-carrier who lived in Marousi and helped his father sell mineral water in Athens as the city lacked a proper water supply at that time.

The inclusion of the Marathon race was at the insistence of another philhellene, Michael Breal. He was inspired by the legend of the messenger Pheidippides (Greek: Πειδιππίδης), who ran the 42.195 km or 26.219 miles from Marathon to Athens to announce the defeat of the huge Persian army by the much smaller in numbers Greek army at the Battle of Marathon in the first ancient Greek-Persian War. After his announcement, he dropped dead from exhaustion. This race is now part of the Olympic Games. Marathon races are held in many countries around the world, but Athens organises the Authentic Marathon Race once a year in November. Thousands of runners come from all over the world to compete in this prestigious event. 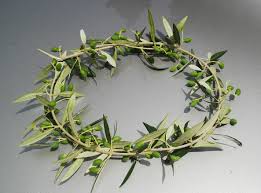 In ancient Greece, it was customary for the winners of an Olympic Games event to be crowned with an olive branch wreath. As Pausanias states, ‘By the back road of the Temple of Zeus, there stands an oleaster tree (a wild olive tree) named ‘elea kallistefanos’ and it is customary of the winners of the Olympiads to be presented with wreaths from this particular tree.’ The wreath is called a kotinos (Greek: κότινος). However, besides the crowning with the olive wreath, monetary prizes and amphora of wine and oil were also given to the winners when they returned to their home town. They were often made honorary citizens as well. 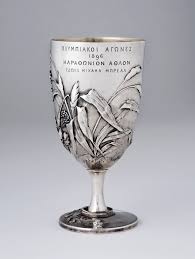 Therefore, besides the silver medal that was given to Spiro Louis, Michael Breal decided to donate a silver cup to the winner of the Marathon Race. On the cup was a relief decoration of birds and aquatic plants that were native to the marshes of Marathon in ancient times. There was also an inscription which read: OLYMPIC GAMES 1896, MARATHON TROPHY DONATED BY MICHAEL BREAL.

This symbolic gesture connected the ancient Olympic Games with the modern ones. Breal, however, was not at the actual presentation of the Cup. 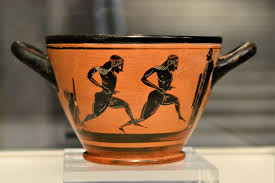 Motivated by Breal’s initiative to donate the Silver Cup, Ioannis P. Lambros, the distinguished numismatist decided to donate an ancient artefact that he had in his collection. It was an Attic black-figured skyphos, which pictures a foot race with a judge looking on, dating back to between the end of 6th and beginning of 5th century BC. He actually wrote a letter to King George I, the king of Greece at the time to allow him to donate the skyphos. In his letter he stated, ‘May I hope that your Royal Highness will allow me to add this prize to the Silver Cup, which Professor Breal has donated. Antiquity seems in this way to contribute to celebrate the victory of the winner of the Marathon Race.’

A skyphos (Greek: σκύφος – σκύφοι) is a two-handled deep wine cup either with a base or without. They have either ear-shaped thumb holds or loop handles at the rim of the cup. 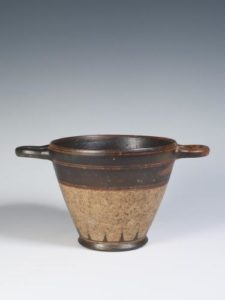 They first appeared around 900 – 700 BC during the Geometric period and therefore can also be found with geometric designs on them. Their shape was conventionalised in Corinth around 7th century BC. From there they soon spread to Athens where the design and the paintings changed accordingly. The Corinthian skyphos was deeper and narrower in shape compared to the the Athenian type, which was wider and shallower. The skyphos was used at banquets or symposium (Greek: συμπόσια).

The Attic black-figured skyphos had been taken by a Nazi officer that had been serving at the German Archaeological Institute in Athens between 1930-1937. It became a part of the Werner Peek collection, which was later sold to the Munster University Germany in 1986.

The Rector of Munster University returned the skyphos to Greece at a ceremony held at the National Archaeological Museum of Athens on Wednesday 13.11.2019. It will be on display at the National Archaeological Museum of Athens for the next three months before being put on permanent display at the museum in Ancient Olympia, the birthplace and venue of the ancient Olympic Games and the place where the Olympic Games flame is lit to announce the opening of the Modern Olympic Games every four years.

Spiro Louis left his mark on the Olympic Games. The Marathon Race is identified with him. As John MacAloon, University of Chicago Professor said concerning his euphoric victory, “Without Louis, the Athens Games would have no epic hero, no master symbol to condense and express so richly so many historical themes.”

It is therefore important when priceless, historical items with so much sentimental value such as the Breal Cup and the Attic black-figured skyphos are returned to their rightful place – Greece.

I would also like to add here that besides the prizes and honours bestowed upon Spiro Louis on his victory then, there are many people today who have not forgotten him. One such person is the sculptor, Pavlos Kougioumtzis, who with my help, was able to erect the statue of Spiro Louis just before the opening of the 2000 Sydney Olympic Games in The Grand Parade, Brighton-Le-Sands, one of the Sydney suburbs of Botany Bay, the Bay where Captain Cook landed on 29 April 1770, to claim Australia as a British colony. A historical monument in a historical place. 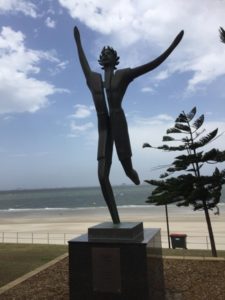