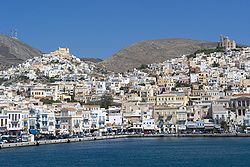 The island of Syros (Greek: Σύρος) is referred to as the jewel of the Cyclades. This is understandable when you see the panoramic view that it offers from the hilltop overlooking the township towards the harbour, the Aegean Sea and the neighbouring islands of Tinos, Delos, Mykonos, Poros, Andros and Naxos. They are some of the major islands that make up the Cyclades (Greek: Κυκλάδων), which refers to the circle that is formed by over 220 islands around the sacred island of Delos. The smaller islands are uninhabited.

There is a great deal of history and mythology connected with Syros as it goes back to over 5,000 years to the Early Bronze Age of the Cycladic civilization. The capital of the island is Hermoupolis (Greek: Ερμούπολη) with Ano Syro and Vari being the other larger towns. It has always been an important port town, and during the 19th century was even more significant than Piraeus, the port city of Athens. The island was a go-between for merchandise, merchants and travellers from the Levant, Egypt and the rest of Europe.

The first years of the Greek Revolution of 1821 against Ottoman rule saw the spread of cholera and other contagious diseases. Refugees trying to escape Ottoman oppression from Asia Minor, Chios, Psarra as well as other neighbouring islands congregated in Hermoupolis. At the same time, the city became a centre of commerce and a transit point between east and west. Greek authorities were forced to implement preventative measures in order to stop the spread of infectious diseases. These measures, which were already being implemented in other European countries, were quarantine buildings where travellers stayed in isolation and goods were stored for a number of days.

Therefore, in 1834, King Otto’s architect and engineer, the Bavarian Wilhelm von Weiler was assigned the task of designing and building such a centre. Pidali Bay, on the southern tip of the port was chosen as the best site for the building of the quarantine centre, which has become known as Lazzaretto. The name ‘Lazzaretto’ is either associated with Lazarus, the leper from the biblical parable, and who is also the patron saint and protector of lepers or it may be associated with the Santa Maria di Nazareth church in Venice, which was the original Lazzaretto, as the island of Syros was under Venetian rule from the early 13th century. 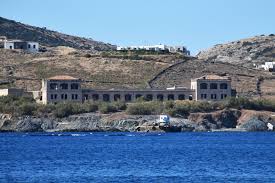 The building, which was completed in 1841, reflects the architecture of the 19th century and it shows the changes that have taken place during the course of time. The building is built of stone with arches made of red brick and pilasters made of stone to decorate the porches. The building complex is arranged along a rectangular courtyard. There are multiple gates, each servings a different function e.g., a different entrance for travellers entering, for others leaving, for goods, for the staff etc. On the side over-looking the sea, the building has two two-storey structures on the corners and one longitudinal single-story structure in the middle. The remaining three sides that make up the rectangular shape are also single-story structures.

The building had 32 autonomous ‘studios’ with a bedroom, a kitchen, a bathroom and a small sitting room area with a fireplace for the winter months. There was a complex sewer system and vertical clay pipes inside the walls gathered the rain water into a large tank underneath the northern wing.

In many travel diaries of that period, the living and social conditions of the quarantine centre are described. The diary of George Ferguson, who spent a week at the centre from 19 to 26 September 1847 when he arrived there from Turkey, is of interest.

After dinner, at about 5 o’clock, I was rowed to the Lazaretto, where I was installed in 3 tolerably comfortable rooms for which I was to pay 3 drachmas or 2 shillings a day. The suite of rooms next to me are occupied by two Greek merchants settled at Malta who are very civil and obliging fellows. I am the only Englishman and, with the exception of the above, the only person with any claim to the designation of gentleman … .

On the floor below me there are 8 women in one room, rather a formidable party. I have also amused myself reading the inscriptions which former tenants have left on my walls, many of them very like those found in regular prisons. One man has made a calendar of his week’s confinement and seems to have rejoiced greatly in scratching out day after day. … .

On the last day of our time we were inspected by a Doctor, who rejoiced in the classical name of Belisarius, but who merely asked us separately if we were well. … .

In the 120 years of turbulent years of Greek history, the building started off as a quarantine centre, but was also used as a refugee centre during the Cretan Revolution of 1866, the third and largest in a series of Cretan revolts against Ottoman rule for Cretan independence, which was finally achieved in 1898. Later, it was used as a prison for criminals and much later during the Greek Civil War at the end of WWII as a prison for political prisoners on the way to Gyaros (Greek: Γυάρος), a desert island and a land of exile.

The site is appropriate for any type of development that might take place today. There are plans to renovate and transform the building into a casino. Whatever development takes place, it will improve the whole area and give added value to the island of Syros.