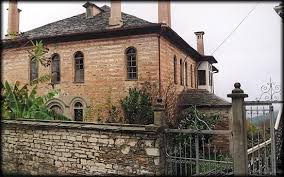 On Mount Athos or the Holy Mountain (Greek: Άγιο Όρος) many schools operated over various periods. However, in 1749 the Athonias School or the Athonias Ecclesiastical Academy was established. It became the centre of The Greek Enlightenment during the 18th century, offering high level education in ancient philosophy and modern physical science. 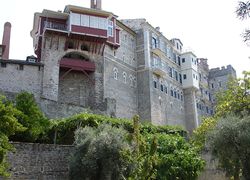 The Athonias School was erected on top of a hill as a part of the Vatopedi Monastery. Its imposing ruins can still be seen today. The Vatopedi Monastery was founded in the second half of the 10th century by three monks: Athanasius, Nicholas and Antonius, from Adrianople. The first director of the school was Eugenios Voulgaris (1753-1759), a scholar, theologian and prominent figure of the modern Greek Enlightenment and later archbishop. The Ecumenical Patriarch of Constantinople Cyril V entrusted him with the renew 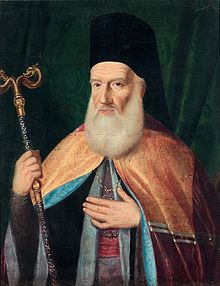 al of the ecclesiastical education as he was considered in having the talents necessary for such a challenge. Eugenios Voulgaris wanted to upgrade the learning within the Orthodox Church with studies in classic works combined with modern European philosophy and logic to the monks and those wishing to be monks. Under his leadership the school drew many students and gained fame not only in the Orthodox world, but in many parts of Europe. However, as there was hostility from the more conservative circles, he was eventually forced to resign. 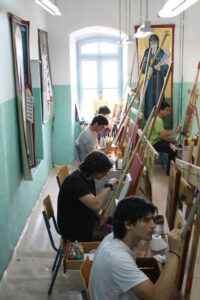 In 1854 it was established in a part of the Skete of St Andrews in Karyes, the administrative centre of Mount Athos. Today, it follows the Greek secondary school curriculum combined with an ecclesiastical education. Byzantine Music, Iconography, Liturgy, monastic history, interpretation of the Bible, and more are also taught at the school.