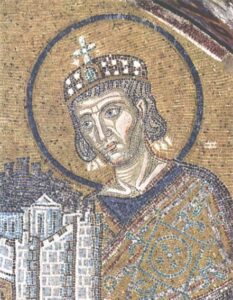 The Byzantine Empire was the continuation of the Roman Empire after the split in power and is therefore also referred to as the Eastern Roman Empire or Byzantium. Byzantium (Ancient Greek: Βυζάντιον) was an ancient Greek city colonized by the Greeks from Megara in the 7th century BC. It was named Constantinople in honour of the Emperor Constantine the Great (306-337 AD), who was the first to convert to Christianity in 312 A.D putting the Empire on the road towards Christianization. In 381, during the reign of Theodosius I, it became the official state religion of the Eastern Roman Empire turning Constantinople into a thriving religious center. It was the capital of the thousand-year existence of the Byzantine Empire, which was not only primarily Greek-speaking, but also influenced by Greek culture, philosophy and traditions until its conquest by the Ottoman Empire in 1453 AD. 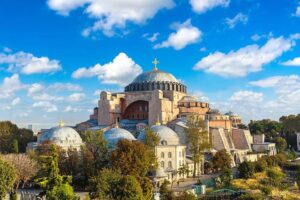 Constantinople was chosen to be the capital of the Byzantine Empire as it was the crossing point between the continents of Europe, Asia and later Africa as well as playing an important role in commerce, culture, diplomacy, and strategy. It was the centre of the Greek world, and the Greek language was the lingua franca at that time. It was the language in which the New Testament was written as well as being the primary liturgical language of the church. Therefore, Constantinople is generally considered to be the ‘cradle of Orthodox Christian civilization’. From the mid-5th century to the early 13th century, Constantinople was the largest and the wealthiest city in Europe. The Church of the Holy Wisdom (Hagia Sophia – Greek: Αγία Σοφία) in the 530s was built under Emperor Justinian I. It is considered the epitome of Byzantine architecture and has influenced the architecture of not only the churches of the Christian world, but also the Ottoman mosques.

The Great Schism of 1054 divided the Christian church into two major branches: the Western Roman Catholic Church and the Eastern Orthodox Church. This came about due to a complex mixture of religious disagreements and political conflicts. For example, whether it was acceptable to use unleavened bread for communion (the west supported the practice, the east did not). Another point was whether clerics should remain celibate. The west believed that they should, whereas the east did not. The political conflict also had to do with who was religious leader. Rome felt that the pope should have the authority over the patriarch in Constantinople. However, Constantinople disagreed. Although the two churches have never reunited, the two branches of Christianity have come to terms with each other. 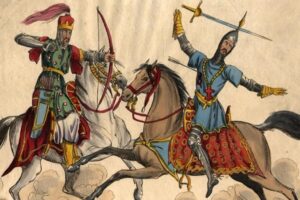 The Crusades that took part in the Middle East to recover Jerusalem and its surrounding area from Islamic rule, would prove to be the Trojan Horse for the eventual downfall of the Byzantine Empire. These series of religious wars were supported and often directed by the Latin Church in Rome between 1095 and 1291.

The First Crusade, which resulted in the recovery of Jerusalem in 1099 was followed by many more. However, the sacking of Constantinople in April 1204 marked the culmination of the Fourth Crusade. After the capture of the city, which the Crusader armies looted and destroyed a large part of, Balwin of Flanders was crowned Emperor Baldwin I of Constantinople in Hagia Sophia.

Most of the Byzantine Empire’s territories were divided up among the Crusaders. However, several small independent states were established by the Byzantine aristocrats, one of them being the Empire of Nicaea, which eventually recaptured Constantinople in 1261 and proclaimed the reinstatement of the Empire. Unfortunately, the restored Empire never managed to reclaim its former territorial or economic strength. Eventually, it fell to the rising Ottoman Empire on 29 May 1453 after a siege of 53 days. This outcome wounded the relationship between the Catholic and Orthodox churches for many centuries and it is only in modern times that they have been reconciled. 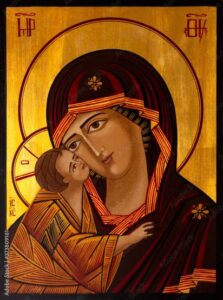