Lemnos is the 8th largest Greek island located in the north Aegean. The position of the island is quite important as it is opposite the Dardanelles Strait of Turkey, and between Mount Athos and the islands of Samothrace, Imvros and Lesvos. It has always been a stopping place from antiquity for those sailing in the north Aegean. 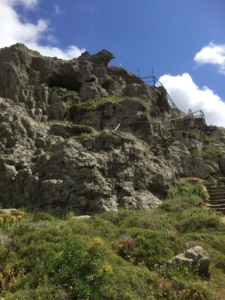 Lemnos, the eighth largest Greek island in the north Aegean, has many landmarks. One of them is the church of Panagia Kakaviotisa (Greek: Παναγία η Κακαβιώτισσα), the only church to be found in a cave in the whole of Lemnos. It is found east of the village Thanos in the area called Zematas, in Mount Kakavos from which it is named after. It is only 4 km from the capital of the island, Myrina. 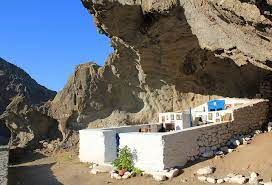 The church was first referred to in monastic scripts in 1305 as a dependency of the Monastery Agia Lavra on Mount Athos or Holy Mountain (Greek: Άγιο Όρος). The church has a low, white-washed wall built around it, but without a roof. It is said that every time the church-going villages of the area tried to put a roof over the church, the next morning when the work had been finished, the roof would have caved in. This sign showed that the Holy Mother (Greek: Panagia – ‘all Holy’), wanted as a roof, the ceiling of the cave, the middle of which has a small opening in the shape of an eye that the devout church goers named the ‘eye of Panagia’. Throughout the year, even during the summer months, water drops from the roof of the cave. These are referred to as the ‘tears of Panagia’.

This unique sanctuary was founded by six monks, who came from the small neighbouring island of Agios Efstratios to escape the raids by Turkish pirates. Both islands had ties with the Byzantine Empire and Mount Athos. They built the chapel under the rocky ‘canopy’ of the cave to perform the divine services for their religious needs. An old stone well below the chapel indicates that the area was also farmed by the monks. On the levelled area of the hill, there are remains of old vineyards dating back to the 1950s. 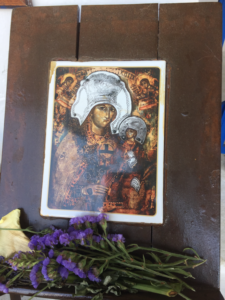 Unfortunately, when the monks passed away, other monks did not take their place. Therefore, the last monk decided to leave the area and go to Mount Athos. It is said that as he walked towards the coast of Zemata, he met a local shepherd from the neighbouring village of Kontia. He entrusted the shepherd with the icon of Panagia ‘Amaranth Rose’ (Greek: Παναγία ‘Ρόδων το Αμάραντο) and asked him to place the icon in the chapel on the Tuesday after Easter Sunday and hold a liturgy in her honour. The monk then entered the sea, opened his garment, which took the form of a boat, and in a miraculous way, was lost from sight. Mount Athos is opposite Lemnos and can be seen from many parts of the island, especially from Myrina, the capital of the island.

From that day onwards, the icon of Panagia ‘Amaranth Rose’ is celebrated in the chapel annually on the Tuesday after Easter as well as the last Saturday before the Assumption Day of Virgin Mary on August 15 (Greek: Κοίμηση της Θεοτόκου). Pilgrims from all over Lemnos attend the services and worship the icon. The ‘Amaranth Rose’ never withers. It symbolizes the purity and fragrance of the Virgin, which will remain alive into eternity. 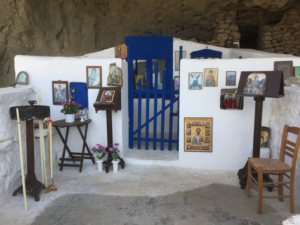 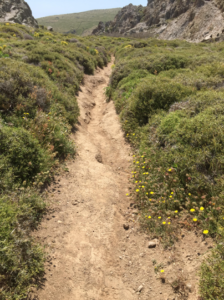 The chapel is at an altitude of 260 meters. It has become a hiking destination for many visitors to Lemnos. Once you leave the asphalt road, it takes another twenty to thirty minutes of hiking along a dirt track through the hillside with low bushes and pockets of wildflowers before reaching the foot of the hill where the chapel is located. The serenity of the place is in accord with the natural beauty of the mountain area. Besides the small and large caves that can be seen all around, there is an impressive view of the sea in the distance. At the chapel, candles are available for the visitors to light in honour of Virgin Mary as well as seats and tables to sit at for a snack before the return walk.