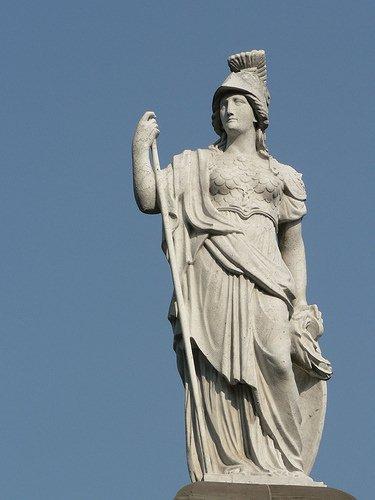 Visiting the capital city of a country is a must. It is the gateway to its past and present as well as showing what its future might hold. The city of Athens is steeped in history and this history has influenced and continues to influence the rest of the world. As my grandson said when we went sightseeing in Athens, “We are walking through ancient Greece”. And this is true. No matter what part of Athens you walk through, it connects you to the past.

The birth of the goddess Athena

Myths make up a great part of the history of Ancient Greece. They are a way of explaining things that are difficult to understand. They are filled with imaginary events, but they invariably have the vision of the nature of life and of the world. These myths were often a part of the religion of the people and referred to mortality and immortality, good and evil, light and darkness. They help to understand the political institutions of Ancient Greece and its civilization. One such myth is the birth of Athena, who was born from the head of Zeus, king of the Olympian gods. This myth explains how wisdom springs from the ‘head’ of a mighty person, a person that is to be looked up to, to be respected and to be followed; a person that is the leader of men.

The Earth Goddess told Zeus that he was in danger of being ousted (removed) from his throne on Mount Olympus by one of his children just as he had overthrown his father, Cronus. Mother Earth predicted that Metis, one of his wives and daughter of white-haired Oceanus, would bear him a daughter and a son. The daughter would be wise and powerful like Zeus, but the son would not heed Zeus; he would be cruel and ambitious.

In order to overcome this looming threat, Zeus found Metis, who was already bearing his child, and after lulling her to sleep, he enfolded her in his arms and took her into his own body. In this way, the child that Metis was bearing was now in Zeus’ body. He soon became afflicted with terrible headaches and so he called upon Hephaestus, his son by Hera, god of fire and the forge, to split his head open.

At first, Hephaestus was not willing to do this, but seeing that his father was in so much pain he had no choice but to split his head open with his great hammer. Immediately, there was a flash of light and from his head sprang Pallas Athena, goddess of wisdom as well as war. She was born wearing her helmet and 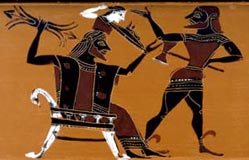 head with his might hammer. spear. Although she did not want to use her weapons, she was wise enough to know that in order to defend peace and justice, she would need them to stop conflicts between warring groups. That is why she had both qualities – goddess of wisdom and goddess of war. When she took up arms, she was called Athena Nike and there are many statues of her with wings because she would fly to the area where people were at war. Once the conflict was over, she would return to Mt Olympus and lay her helmet, shield and spear at Zeus’ feet until she needed them again.

Besides these responsibilities, she was also the patron of the arts and crafts. She helped man to invent the distaff and the loom and taught women how to spin, weave and embroider. The pottery wheel was invented and she taught men the art of pottery and painting. Ideas flowed from her head and the gifts of the fine arts, writing and the sciences that she bestowed upon the people of Athens are just as important today.

The naming of the city of Athens

The city acquired its name during the reign of Cecrops. Both Athena and Poseidon (god of the sea) wanted to be patron of the city. The two gods competed with each other to see who would be chosen. Poseidon caused a spring of salty water to flow when he threw his trident on the rock of the Acropolis. The salty water symbolized the naval power that Athens was. Athena on the other hand, gave the city the olive tree, which symbolizes peace and prosperity. The silvery-green tree would give food and oil and its branches would make the wreaths that would reward the efforts of those that took part in the Panathenaia festival. This was a religious festival and took place once a year in June on the day of Athena’s birthday. A procession of maidens would carry the veil (Greek: peplos) through the marketplace and up to the Acropolis. The peplos was placed on the wooden statue of Athena Pallas. It had myths and stories of Athena’s victories woven into it. This procession can be seen in the frieze of the Parthenon, which is currently in the British Museum, but which will, one hopes, eventually be returned to its rightful place in the Acropolis Museum. Phidias was the sculptor of this masterpiece. At the entrance to the Acropolis (Propylaea) a ‘hekatombe’ (Greek: hekaton = one hundred) took place. This was a sacrifice of a hundred cattle to the goddess. The meat was used in the banquet on the final night of the festivities.

Weaver’s section of the frieze – in the Louvre Museum, Paris

Some interesting facts about the goddess Athena