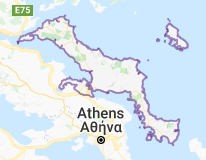 Recently I went on a trip to the northern part of Euboea, one of the largest islands of Greece, and only a couple of hours north of Athens. I had visited Euboea on a number of occasions, but had never visited the northern mountainous part of the island. We drove through tree-covered roads and picturesque villages with the thick forest of pine trees going all the way down to the coast. It is easy to understand the history and the mythology that is connected with this island. 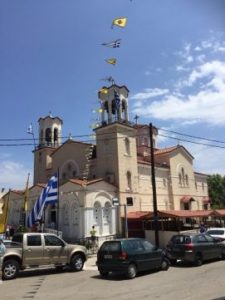 We started off by crossing over to Euboea from the port of Arkitsa and headed for Aidipso, which was our base. From there we visited the areas of Agios Georgios, Lihadonisia, the Monastery of Osios David in the area of Rovia, the area of Limni, a swim at Agia Anna and then on to Istaia. A visit to the church of Saint Ioannis Rossou in the township of Prokopi is a must. Then on to Eretria for lunch with a stop-over at Halkida for coffee before heading back home. The weather was just right for such a tour. 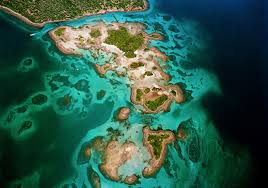 The highlight of the tour for me was the visit to the island complex known as Lihadonisia.

The scientific version is that the islands were formed after a very strong earthquake in 426 B.C. The land between the islands sank and that is how they were formed. However, I prefer the more romantic version, which, according to Greek mythology, names the islands after Lihas, Heracles’ servant. Deianira, Heracles’ wife, gave Lihas a robe to give to Heracles as a present. However, the robe was poisonous. Deianira thought that Heracles was having an affair with another woman and it was her way of taking revenge. Heracles, in terrible pain, quickly removed the robe thinking that Lihas was trying to poison him. He picked him up and hurled him into the sea, thus forming the islands, which when seen from above, form the body of a person. 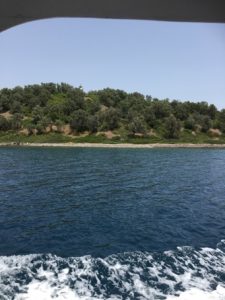 There are seven main islands and a number of smaller ones. The main island is Manolia, which is the main tourist area and has an organised beach area. The other islands are Strongili, which has a big lighthouse on it, Mikri Strongili, Steno, Vagia, Vorias and Limani. The smaller rock formations around the islands are called Pontikonisia (mouse islands). Ancient remains have been found on the larger islands.

The islands are considered to be the Seychelles of Greece with their crystal clear turquoise waters and sandy beaches.

They are connected by boat with the village-port of Agios 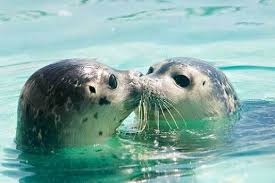 Georgios (Saint George). Besides the swimming and relaxing on the beach of Manolia, you can take a boat trip around the islands. The boat has a glass bottom that allows you to see the sea bottom, the reefs and the shipwrecks, which are visited by divers from all around the world. You may also meet a family of monk seals, Monachus Monachus, one of the most endangered mammals in the world.

Greek coffee with loukoumades, honey and a couple of balls of ice-cream at Aidipso is a great way to relax after a day of sightseeing. Make sure you try it when you visit the town!! 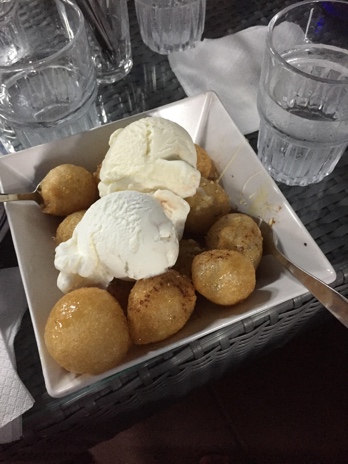