The liberating of Lemnos after 456 years of Ottoman oppression is connected with Rear Admiral Kountouriotis and the flagship Averof.

On 6th October 1912 the Greek battleships led by the flagship Averof arrived at the port of Moudros, on the east side of the island of Lemnos in the north Aegean. Rear Admiral Koundouriotis asked the Turkish Governor for the immediate surrender of the Turkish forces on the island. The Turkish Governor asked for 24 hours so that he could communicate with Constantinople. Rear Admiral Kountouriotis was informed that the Turks were preparing for battle and therefore he prepared for the overtaking of the island.

On Sunday 7 October the day was overcast and rainy and therefore encumbered the Greek Navy from carrying out the takeover. The fleet, under Kountouriotis, progressed towards the Bay of Moudros (Greek: Μούδρος). Due to the bad weather and hardships that the soldiers had already undergone, disembarkation had to be postponed until the following day.

On Monday 8 October 1912, the disembarkation began at Vourlida (Greek: Βουρλίδια) near Diapori (Greek: Διαπόρι) outside the village of Tsimantria (Greek: Τσιμάνδρια). The Greek destroyer Doxa (Greek: Δόξα) protected the rowing boats full of soldiers as they disembarked. The Lemnians from the surrounding villages were surprised at the sight of the Greek soldiers marching towards Myrina (Greek: Μύρινα), the capital of Lemnos, on the west side of the island. It is also known as Kastro (Greek: Κάστρο) due to the castle that was built on the promontory above the harbour by the Venetians. The soldiers were accompanied by the villagers holding ancient rifles, knives and Greek flags. The Turkish forces surrendered without a fight. Lemnos was finally free.

The Greek fleet, led by the battleship Averof arrived in the clear blue waters of Romeiko Bay, on the other side of the harbour of Myrina. The Lemnians gathered in the church of the Holy Trinity (Greek: Αγια Τριάδα) in Myrina to pray and take part in the first Thanksgiving service not under Ottoman rule. They were finally free. Rear Admiral Kountouriotis and all the officers were present at the service. In order to thank God for the freeing of Lemnos from Turkish oppression, Kountouriotis made an offering of an epitaph to the Church of Virgin Mary in Moudros, which can still be seen today.

Lemnos was finally under Greek rule. However, the official handover of the island to the Greek State took place on 1st February 1914, when the Great Powers of Great Britain, 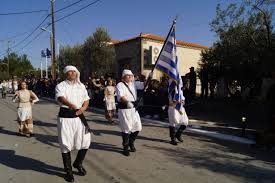 France and Russia, after long discussions finally recognised Greek sovereignty of the island as well as other islands in the Aegean Sea that soon followed. Every year on 8th October, the liberation of Lemnos and its unity with the rest of Greece is celebrated with parades and church services. 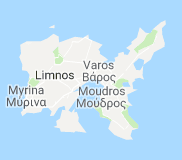 The Battle of Lemnos took place between 6 and 8 October 1912 at the beginning of the First Balkan War, which started on 5 October 1912. This War began because the Ottomans refused to give in to the demands of Greece, Serbia, Bulgaria and Montenegro for the Christians to have the same rights as the Muslim citizens. The freeing of Lemnos was imperative in order to restrict Ottoman operations in the Dardenelles, to stop the Ottoman forces in Macedonia and Thrace from being reinforced and to carry out a naval blockade of the Aegean trade routes and ports that could be used by the Ottoman fleet. Lemnos was the key behind the successful outcome of these operations as it was right opposite the Dardenelles. Moudros became the base for Greek naval operations for the First and Second Balkan War as well as for the First World War that followed. It also played a key role in the recovery of the other Greek islands in the Aegean such as Imbros, Tenedos, Psara, Chios, Lesvos and Samothraki. 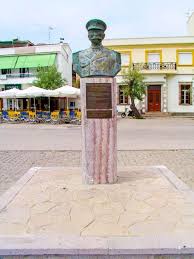 A statue of Rear Admiral Kountouriotis has been erected in the port of Myrina in his honour. Kountouriotis was born on the island of Hydra. He comes from a well-known family of ship-owners, many of whom took part in the Greek War of Independence. He served as Prime Minister under King Otto, the first king of Greece. In June 1911, he was sent to Britain to take control of the newly commissioned Averof, which served as the flagship of the Navy and which he commanded.