The people of ancient Greece lived by a 12-month lunar calendar, counting the first day of a month to be the first day that the New Moon is visible in the night sky. The ancient Greek Attic calendar had twelve months and the ‘Boedromion’ month was considered the first month of the year. It now corresponds to the month ‘September’ (from the Latin septem, ‘seven’) as it was originally the seventh of the ten months of the ancient Roman calendar that began with March. After the reforms that resulted in a 12-month year, September became the ninth month, but retained its name as we know it today.

‘Boedromion’ was a very important month as many religious celebrations and traditions took place during this period, many of which we still find practiced today. The first day of ‘Boedromion’ is referred to as ‘Noumenia’ (Greek: Νουμηνία – ‘new moon’) and was the time to honour Hestia, goddess of the hearth and domesticity, and Zeus, King of the Olympian Gods, along with other Deities of the household or family. Prayers and offerings were made for good fortune.

On the fifth day of the ‘Boedromion’ the ‘Genesia’ (Greek: Γενέσια) was celebrated. This celebration was in honour of their ancestors. It was not only a day of mourning, but one of remembrance as well. Food was served in memory of the dead straight after the funeral, which continues to this day. 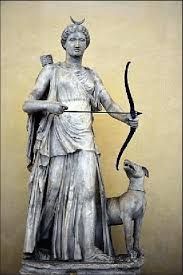 The sixth day was dedicated to the goddess Artemis (Greek: Άρτεμις), the goddess of the hunt, wild animals, nature, as well as childbirth and chastity. She was the daughter of Zeus and Leto, and the twin sister of Apollo (Greek: Απόλλων), also known as the Sun God. He was the god of archer, music and dance, healing and diseases as well as the protector of warriors. He was celebrated on the seventh day  as it coincided with the victory of Theseus against the Amazons and the victory of the ancient Greeks against the Persians at Marathon 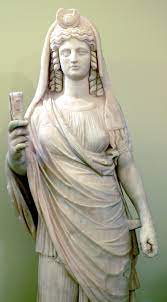 September is also the month dedicated to Demeter (Greek: Δήμητρα), goddess of the crops, grains, and the fertility of the earth. She is also responsible for the changing of the seasons depending on her mood as she roamed the world looking for her lost daughter Persephone, who had been kidnapped by the god of the Underworld, Hades. To avoid plunging the world into a deadly famine as nothing would be grown, Zeus ordered Hades to return Persephone to her mother. However, as Persephone had eaten some pomegranate seeds, which alongside death also symbolizes fertility and the indissolubility of marriage, she had to divide the year between her mother and her husband, which explains the seasonal cycles. This myth gave rise to the Eleusinian Mysteries, the most secretive religious rites in Ancient Greece. The Mysteries were celebrated between 15th and 22nd of the ‘Boedromion’. Priests wore wreaths made of twigs from the pomegranate trees during these ceremonies. 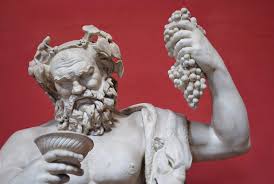 September is also the month of the grape harvest and celebrations to Diosysus (Greek: Διόνυσος), the son of Zeus and Semele. He is the god of winemaking, fertility, ecstasy, festivity, and theatre. He is also known as Bacchus. Many festivals were held in his honour, where the wine, music, and ecstatic dance freed his followers from their inner fears and restraints. His thyrsus, a fennel-stem scepter, often wound with ivy and dripping with honey, was a sacred instrument at religious rituals and festivities. It was both a beneficent wand as well as a weapon used to destroy those who opposed his cult and the freedom he represented. It was a symbol of prosperity, fertility, and hedonism associated with the god Dionysus.

Today, September is still referred to as the ‘Harvest’ month as it is the time for the picking of the grapes by hand for wine making. Although wine is now made in modern wine distilleries, the tradition of pressing the grapes with the feet in a traditional wooden wine press can still be found in many villages.

Besides wine making, the must of the grapes is used to make grape must cookies and grape must pudding. A syruped grape spoon sweet is also made. 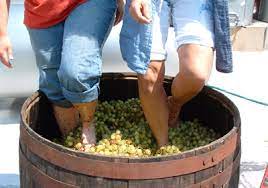 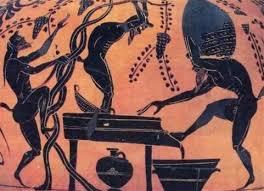