Olive picking time in Greece starts from October and finishes in February depending on the area. Although the olive tree did not originate in Greece, but in the near East at least 7,000 years ago, the ancient Greeks gave it the symbolism that we associate with it today.

The olive tree relates to the ancient myth of the Greek goddess Athena, goddess of wisdom, warfare and handicraft, and the naming of the city of Athens. Although the city was ruled by King Cecrops, it did not have a patron god, and as Athena and Poseidon, God of the Sea, were both interested in the city, a contest was held on the sacred hill of the Acropolis by Zeus with King Cecrops as judge to see who the patron god would be.

Poseidon moved first and with one swift strike of his trident he struck the ground and water sprouted from the opening. However, the water was salty and therefore not suitable for drinking or cultivation purposes. Next, Athena knelt and planted a small tree: an olive tree. The tree could be used for its high-quality timber, and its crops were not only a source of food, but also produced olive oil that had many purposes. King Cecrops immediately proclaimed Athena the winner of the competition and gave her name to the city.

The symbols of the goddess Athena are the owl (representing wisdom), the gorgoneion (i.e., Medusa’s head on her breastplate), and the olive branch, which symbolizes victory, peace, fertility, and prosperity. The planting of the olive tree in modern times has symbolized peace and cooperation between countries and the olive branch wreath crowns the Olympic Games winners. 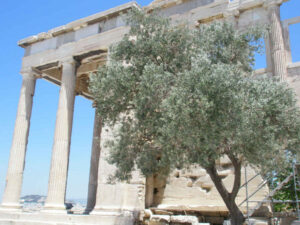 The olive tree growing in front of the Erectheion on the Acropolis is said to be from the original tree that had been planted by the goddess Athena. Although it has been burnt many times throughout the centuries by the various invaders, a sprig was always saved to be planted again. The most recent planting of such a sprig was in 1952 when members of the American School of Archaeology replanted the tree with a branch that had been saved and harvested following the destruction caused by the Germans during World War II.

Besides the area around Athens, the olive tree can be found in most parts of Greece, such as the southern Peloponnese, Crete, and most of the Greek islands as it loves the Mediterranean sun and sea. It can grow on rocky soils and can survive dry weather conditions and strong winds. 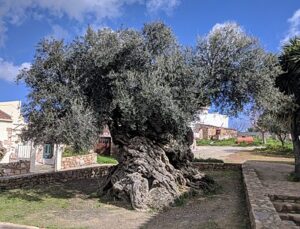 The oldest olive tree is to be found in the village of Ano Vouves outside Chania on the island of Crete. Although the life expectancy of an olive tree is between 300 and 600 years, the ‘Olive tree of Vouves’ is said to be at least 2000 years old and is still productive. In 1997, it was declared a protected natural monument and branches from the tree were used for the wreaths for the winners of the 2004 Athens Olympic and the 2008 Beijing Olympics. 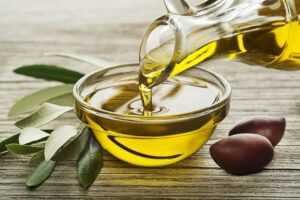 Homer referred to the olive oil as ‘liquid gold’ and Sophocles in ‘Oedipus at Colonus’ calls the olive ‘nurturer of children’. Besides the olive wreath or ‘kotinos’, which crowned the winners at the various games such as the Panathenaic games in honour of the goddess Athena, amphorae of olive oil were also given. The winner was able to sell this oil to cover his needs. They would also anoint their body with oil for protection and to keep it supple. Olive oil was and is still used as a basic ingredient in the cosmetic and perfume industry, for the making of soap and as fuel for lamps. The use of oil for the small devotional oil lamps (kandilia) is still used today in churches, in household shrines and at the graves of the deceased. Using olive oil in cooking was a status symbol as only the wealthy could afford it.

Depending on the use, some olives are picked by hand, others are beaten by poles onto cloths that have been spread out underneath the trees. The olives that are to be pressed for their oil are taken to the pressing mill and the others are treated for consumption purposes. They can be used in salads, breads, pies, or sauces. There are various varieties of olives from the well-known black Kalamata olives to the juicy Amfissas olives.

Greece is the third largest producing country in the world after Spain and Italy. However, it produces 80% of extra virgin olive oil, which is the top-ranked classification category worldwide. Greece also exports to Italy and Spain without it being considered an export since they are all members of the E.U. The prefectures of Heraklion on Crete and Messinia in the southern Peloponnese have the highest production of olive oil in Greece. The biological cultivation of the olive tree, which started approximately ten years ago, is also on the increase.

Some methods used by the ancient Greeks to cure the olives for consumption are still used today. The steps are: 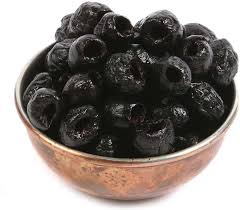