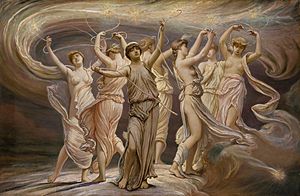 The Pleiades (1885) by the American Symbolist painter Elihu Vedder

Looking up into the sky on a clear night, various constellations and star clusters can be seen by the naked eye. One such cluster in the Northern Hemisphere is the Pleiades cluster in the constellation of Taurus. Besides the importance of these stars in Greek mythology, it has a special place in many other ancient cultures as it often marks an important calendar point.

In the Northern Hemisphere skies, the Pleiades cluster is associated with the coming of spring in May and the coming of winter in October. They can be seen shining from dawn to dusk.

The name Pleiades comes from Ancient Greek. It probably derives from plein (to sail) because of the cluster’s importance in determining the sailing season in the Mediterranean Sea. In Greek mythology the name refers to the seven divine sisters whose name is said to be derived from their mother, Pleione.

The Pleiades (Greek: Πλειάδες) were the companions of Artemis, goddess of the hunt and protector of young girls. They were the daughters of the titan Atlas and the sea-nymph Pleione. The names of the seven Pleiades are: Maia, Electra, Taygete, Alcyone, Celaeno, Sterope and Merope.

Orion, the giant huntsman, was the reason why the Pleiades were turned into stars. He fell in love with their beauty and grace and began to pursue them. Artemis asked Zeus to protect them and he did so by turning them into a flock of doves, which he set in the heavens. Artemis was angry that she could no longer see her companions and so she asked her brother, Apollo, to send a giant scorpion to kill Orion. In order to save Orion, Zeus placed him among the stars as the constellation Orion, which continues to pursue the Pleiades in the sky.

The story of the Pleiade Meropi (Greek: Μεροπή) is an interesting one and very symbolic. One meaning of her name is ‘with face turned’ from ‘meros + ops’. Another meaning when the name is broken down means ‘the voice of the face’ as the sound from the person comes from the opening ‘opis’. She is also referred to as the Muse of man because she imparts her knowledge and wisdom to him through marriage in a calm way. She is the only Pleiade that married a mortal, Sisyphus, the king of Corinth. The star ‘Merope’ is often called the ‘lost Pleiad’ because she was at first not seen by astronomers or chartered like her sisters as it is the furthest of the stars. One explanation for this is that she was ashamed at having married a mortal. Another is that she was punished by the gods for her action and for the love that she had for Sisyphus.