Besides the many Early Christian and Byzantine Monuments such as the Church of Agios Dimitrios (patron saint and protector of Thessaloniki dating back to 5th century AD), the Church of Agia Sofia (built in the early 7th century on the site of an older temple), the Monastery of Vlatadon dating back to the 14th century, Thessaloniki continued to develop its rich history even when it came under Roman rule in 168 BC with the fall of the Kingdom of Macedon. The Rotunda is an example of this heritage.

The Rotunda (Greek: Ροτόντα) was built in 306 AD by the Romans. The structure is cylindrical in shape with a flat brick dome, 30m high at the peak. In its original design it had an oculus – a circular opening in the dome. 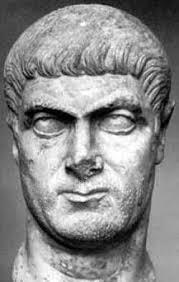 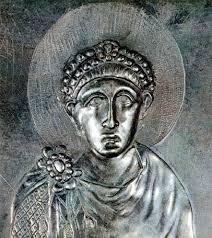 Emperor Galarius made the Rotunda a part of the palatial complex and it was thought that it would be used as his mausoleum. However, after his death in 311 AD, the Rotunda stood empty for several decades until Emperor Theodosius I had it converted into a Christian church in the late 4th century AD. It was decorated with frescoes and very high quality mosaics. The structure was used as a church for over 1200 years until the city fell to the Ottomans in 1430. In 1590 it was converted into a mosque, the Mosque of Suleyman Hortaji Effendi and a minaret was added. It was used as a mosque until 1912 when the city was taken over by the Greek forces during the Balkan Wars between 1912 and 1913. The countries of Greece, Bulgaria, Montenegro and Serbia rose up against Ottoman rule to gain their independence.

On a recent visit to Thessaloniki, an exhibition of mosaics from the Church of Saint Demetrius, the Archeiropoietos and the Latomos Monastery of Thessaloniki along with copies of mosaics from Ravenna created in the 1950s was on display. Ravenna, in northern Italy, is a city well known for its impressive mosaics. It was the capital city of the Western Roman Empire from 402 until the empire collapsed in 476. It then became the capital of the Ostrogothic Kingdom until it was re-conquered in 540 by the Byzantine Empire. In 751, it became the seat of the Kingdom of Lombard.

The exhibition has been organised by the Department of Archaeological Museums, Exhibitions and Educational Programmes of the Ministry of Culture and Sports, in collaboration with the Ephorate of Antiquities of Thessaloniki and the Municipality of Ravenna, with the support of the Italian Ambassador to Athens. Copies of selected wall mosaics created in Ravenna in the 1950s that represent monuments dating back to the 5th and 6th century have been brought to Thessaloniki as part of an exhibition on mosaics. Some of them are copies from the Basilica of San Vitale in Ravenna. They reflect the high art of the originals and offer a unique opportunity for the visitors to admire them together with the original mosaics of the monument in Thessaloniki. 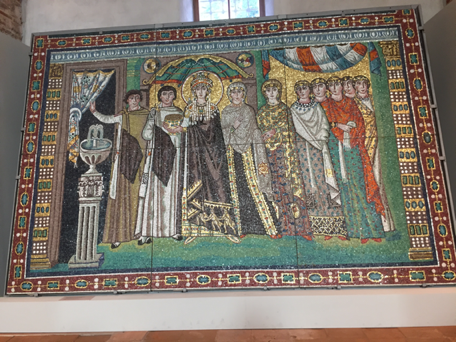 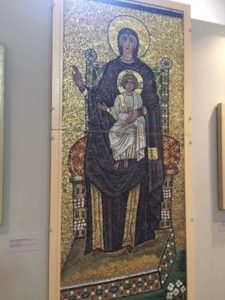 Among the exhibits is an impressive reproduction of the procession of Empress Theodora and her retinue as well as praying saints, ornate decorative motifs, peacocks, fabrics and censers; all in vivid and bright golden colouring. 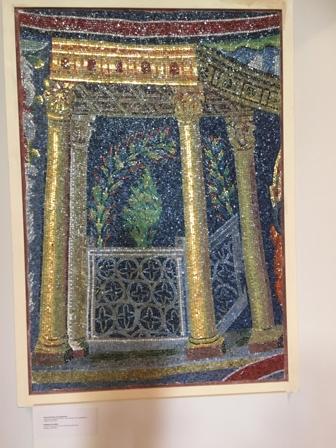 Wall mosaics comprise one of the most impressive expressions of Byzantine art. The majority of the Early Byzantine mosaics are preserved in Thessaloniki and the earliest of them are found in the imposing Rotunda, one of the most significant monuments of world cultural heritage. Following the restoration of the Rotunda and its opening to the public, visitors for the first time may enjoy up close the unique details of its decoration. 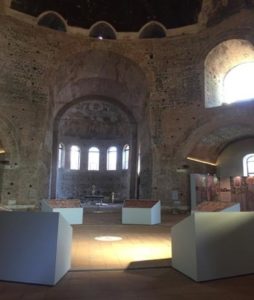 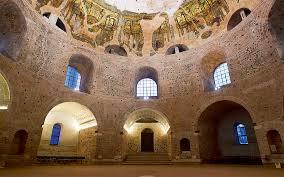 Mosaics from Saint Demetrius, the Acheiropoietos (icons made without hands; they appeared miraculously) and the Latomos Monastery can also be seen through visual material. High-resolution photos of the ceiling mosaics have been placed in the centre of the Rotunda so that the visitor can see the figures close up and thus compare the two workshops.

Today, the Rotunda is an archaeological site and exhibition centre although it is used for religious purposes on special occasions. It is also a UNESCO World Heritage Site.