There are many historical areas that can be easily visited on the outskirts of Athens. Lavrion (Greek: Λαύριον) is one such area. It is situated on the eastern coast of Attica and its importance from ancient times up to now is in the lead and silver mines found in the rugged hillside area of Thoricus (Greek: Θορικός) and the settlement of Agios Konstantinos. These mines played an important role in the development of the city state of Athens, the creation of the Athenian Empire and the Golden Age of Athenian Democracy after the defeat of the Persian invaders under Xerxes I. The mines in modern times helped in the development of the township of Lavrion by giving work to the local people of the area.

Mining activities in the area date back to around 3,200 BC, but became more systematic from the late 6th century BC. The discovery of a rich vein of silver in the area of Agios Konstantinos in 483 BC at the beginning of the second Persian invasion of Greece under King Xerxes I, gave the Athenian state 3,000 tons of silver at its disposal. The mines were under the control of the Athenian city-state, with certain areas exploited by private citizens in exchange for a fixed percentage of ore production. Slaves were used to work the underground shafts and galleries, most of whom lost their lives under the harsh conditions in which they worked. Nearby were the washing areas for the concentration of the ore minerals. 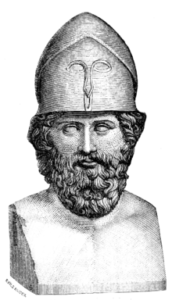 Themistocles (Greek: Θεμιστοκλής), politician, general and one of the archons (‘ruler’) convinced the Athenians to use the money from the silver mines to build 200 triremes that could be used against the Persian fleet as it would be difficult to defeat the Persian forces on land. This decision saved Athens and led to the defeat of the Persian Navy in the historic Battle of Salamis in 480 BC. Once the Persians left, a period of reconstruction began in Athens. Lead was used from the mines for the making of water pipes and clamps. 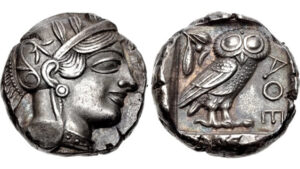 The silver Tetradrachm (four drachmae) coin that was minted became the dominant commercial currency of the eastern Mediterranean. On one side of the coin is the portrait of Athena, the patron goddess of the city. On the other, is the owl, a symbol of Athens, along with an olive branch and the inscription ‘AOE’, an abbreviation for AOENAION, which means ‘of the Athenians’.

The mines, which were an important source of income for the Athenians, declined during the Peloponnese War (431-404 BC) as it was difficult to escape the Spartan patrols that were present throughout the Attic countryside. They were finally abandoned in the first century BC. In 1864 they were again reactivated and mined for their lead by French and Greek companies until 1978. Today, those visiting the archaeological site of Agios Konstantinos can see some of the covered mine shafts and washing area. It’s an interesting area to visit as it connects the past to the present and can be easily reached by car.