Visiting Thessaloniki is always an interesting experience. I usually start off with the Cultural Bus Route that takes you around the historical and cultural points of interest as you can get on and off wherever your fancy takes you. There are a number of museums on the bus route such as the Archaeological Museum and the Museum of Byzantine Culture. As I had often visited these museums, I decided to visit the War Museum of Thessaloniki, which is further up from these two museums and behind the University of Macedonia. Museums are a treasure trove of knowledge and visiting one is always an experience as you never know what interesting exhibits you will see. 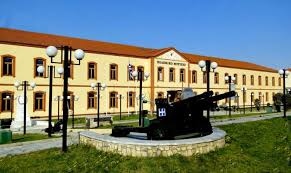 The War Museum of Thessaloniki is in an impressive neo-classic building designed by the Italian architect Vitaliano Posseli and was constructed between 1900 and 1902. As a War Museum, it was opened in 2000 as an extension of the War Museum in Athens in order to preserve the historical memory and heritage in Northern Greece.

The exhibits cover all the major wars from the Greek War of Independence against the Ottoman Empire in 1821, the Balkan Wars (1912-1913), the First World War (1914-1918), the Asia Minor Campaign (1921-1922), the Greco-Italian war (1940), the Battle of the Forts or the Metaxa Line in eastern Macedonia when Nazi Germany invaded Greece (April 1941), the Battle of Crete (May 1941), the Occupation of Greece and the Resistance against NAZI Germany in the Second World War (1941-1944), and finally the liberation of Greece from the occupying German forces on 30 October 1944. There is also a section which displays the part that Greek forces played in Allied action in North Africa, Italy and Normandy. A section covering the Greek military junta or the Dictatorship in Greece (1967-1974) as well as the Turkish invasion of Cyprus in July 1974 explains the more current historical events that have taken place in Greece. 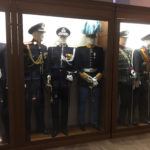 All the above historical events are documented in permanent as well as thematic displays outlining the role that Greece played during those periods. The displays include uniforms of the Greek army, air-force and navy, copies of artillery and ships such as the legendary battle ship ‘Georgios Averof’ (Greek: Γεώργιος Αβέρωφ 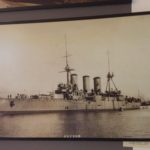 ), which has now been turned into a museum ship docked in the Naval Tradition Park in the Bay of Faliron, Athens. A number of exhibits, such as swords, guns and rifles come from private collections. There are also paintings showing battle scenes, war maps and an impressive display of medals of the Armed Forces.

Besides the covering of wartime life, the Museum also exhibits the role that certain people have played. One such person is the well-known singer, also known as the ‘singer of victory’, Sophia Vempo. During World War II, her voice became a ‘national voice’ as her songs raised the spirit of the soldiers during the war.

However, what impressed me the most was the story of the Phikas family, a family of farmers who lived in the mountain district of Phthiotida in central Greece bounded by the Sperchios river in the village of Kapsi. The capital city of Phtiotida is Lamia. Their story covers 102 years of sacrifice from 1821 to 1923 for the freedom of their homeland. Letters, cards, photographs, documents, heirlooms and other personal items are exhibited showing aspects of their lives.

Dimitrios Phikas (Greek: Δημήτριος Φίκας) participated in the Greek War of Independence against the Ottoman Empire (1821-1823). He took part in the battles of Messolonghi, Athens, Arahova and Thebes under the leadership of Kitso Tzavelas, Georgios Drako, Christos Hatzipetro and Thanassoula Valtino. He was honoured with the Medal of Victory of 1821. 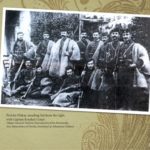 Pericles Phikas (Greek: Περικλής Φίκας) participated in the struggle for Macedonia (1904-1908). He had immigrated to the United States in 1910 looking for a better life. However, he returned in 1913 as a volunteer and participated in the 2nd Balkan War in the Evzon Regiment. He served in the Ioannina area under the leadership of Captain Agra and later under Captain Koraka. (Pericles Phikas is standing 3rd from the right with Captain Koraka’s Corps.) 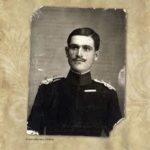 Demonsthenes Phikas (Greek: Δημοσθένης Φίκας) was a draftee in 1911 and took part in the First and Second Balkan campaigns in the Cavalry Brigade, in World War I and in the Asia Minor Expedition. After the battle of Tzoumayia (1913) in Boulgaria, he met his four older brothers (Pericles, Heracles, Ioanni and Konstantino), who were all serving simultaneously. He was promoted for his brave deeds and retired after 12 years of service as a Cavalry Colonel.

The Phikas family represents all Greek families of that period when Greece was struggling against great odds to become a sovereign country. Their lives as farmers and labourers were changed because of an unexpected event – war. However, they persevered despite the long-term military service far from home and the hardships and suffering that this involved as well as the loss of relatives and friends. They sacrificed their lives because they believed in the struggle for independence and freedom for their homeland. They wrote their own history and became heroes in their own right.

As Nikos Kazantzakis wrote in his ‘Askitiki’ or ‘The Saviors of God, a series of spiritual exercises (Greek: Ασκητική), “Your first duty … is to feel within you all your ancestors. Your second duty is to throw light on their momentum and to continue their work. Your third duty is to pass on to your son the great mandate to surpass you…”