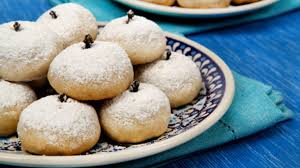 Kourambiedes are traditional Greek sweets that are made at Christmas. They are a shortbread biscuit that is covered with icing sugar. The icing sugar that covers them reminds you of the snow that falls during winter when Christmas and New Year are celebrated.

It is said that this shortbread sweet originated in Persia. During the Ottoman Empire it was introduced to Greece. Kourambie (Greek: κουραμπιέ) comes from the Turkish ‘Kurabiye’. At Christmas, a single dark clove is often put on top to represent the spices of frankincense and myrrh that the Magi brought to baby Jesus on his birth. Kourambiedes can be round in shape, crescent shaped or even star shaped. The secret behind a good kourambie is the butter that is used. Kavala, in northern Greece, is famous for making the best kourambiedes.

In the Balkan Wars of 1912-13, the term ‘kourambies’ was used as a form of slang for soldiers that looked strong and promising, but crumbled the minute they were in battle just like the sweet crumbles as soon as you bite it. This term was also used in World War II by the Greek soldiers to describe Mussolini’s Italian soldiers because they showed a weak will and easily crumbled in battle.

Below is a traditional recipe for kourambiedes.