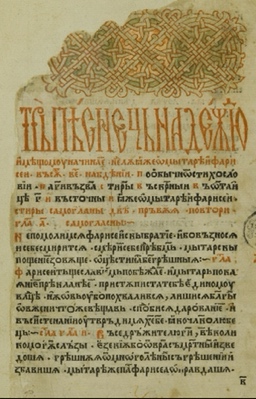 Carnival time or Apokries (Greek: Απόκριες), which means to abstain from meat, begins with the Triodion (Greek: Τριώδιον). This refers to the liturgical book used by the Eastern Orthodox Church that sets out the proper way the fasting period before Easter should be carried out, including the three weeks leading up to the Lent period. Instead of the usual nine odes, it has only three, therefore Triodion, which means three odes.

The Triodion is a period of ten weeks beginning with the Sunday of the Publican and Pharisee (Greek: Τελώνου και Φαρισαίου) followed by the Sunday of the Prodigal Son (Greek: Του Ασώτου). After this the three weeks of the Apokreas follow. The first week is the Prophoni (Greek: Προφωνή), which means Pre-announcement Week, which began on 13th February this year. It is then followed by Kreatini week (Greek: Κρεατινή) or Meat Week, followed by Tirini (Greek: Τυρινή), or Cheese Week. The forty days of Lent (Greek: Τεσσαρακοστή) follow leading into Holy Week and Easter Saturday with the Ascension of Jesus Christ at midnight, which ends the Lent period with the eating of magiritsa soup, the traditional Easter lamb soup, and the cracking of red eggs. Easter Sunday celebrates the miracle of life with the preparation of lamb on the spit or stuffed lamb depending on the area.

The highlight of Kreatini or Meatfare Week is Tsiknopempti (Greek: Τσικνοπέμπτη), Charred Thursday or Smelly Thursday when the smell of barbequed meat permeates the air. Tsikna means the smell of sizzling meat and Pempti is the word for Thursday. This day was chosen as traditionally Wednesdays and Fridays are days of fast for the Greek Orthodox Church.

The tradition of barbecuing meat goes back to antiquity. It is thought that it begins with the ancient Greek Dionysian and ancient Roman celebrations, which survived into Christianity. According to folklore, the eating and drinking and the celebration on the day refers to the fertility of the land as it takes place at the beginning of spring when the earth begins to blossom.

During Tirini or Cheese Week, milk, dairy products, and fish can be consumed, but not eggs or meat. Sunday is the last day of the Apokries when carnival parades take place, and the people get dressed up in various costumes. 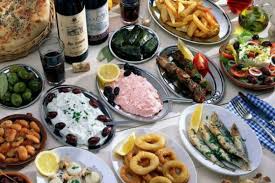 The following day is Clean Monday, which begins the forty days of Lent, including Holy Week. Clean Monday is usually celebrated outdoors with vegan type of food such as octopus or calamari, potato salad, taramosalata (fish egg dip), dolmades (stuffed vine leaves), olives, semolina halva made with olive oil in a pot, and Lagana, a delicious flat-bread. 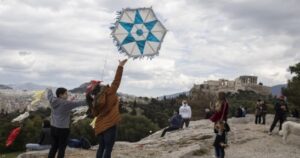 On Clean Monday (Greek: Καθαρή Δεύτερα), it is customary to fly kites of various colours, shapes and sizes. Kite flying can be found in many cultures, each with their own symbolisms. In the Greek Orthodox tradition, it symbolizes the passing of the human soul to Heaven and God. The higher the kite flies, the closer it is to God.

The Eastern Orthodox Church bases its ecclesiastical calendar on the Julian calendar proposed by the Roman Emperor Julius Caesar in 708 A.D. This calendar is used to determine the date of Easter. However, the Western Churches follow the Gregorian calendar proposed by Pope Gregory XIII in 1582. Greece adopted this calendar in 1923 for civil purposes. Consequently, Orthodox Easter is celebrated on different dates each year. The Orthodox Church and the Catholic Church along with the other Western Churches celebrate Easter on the same date every four years.