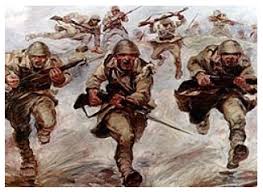 The treacherous snow-capped Pindus Mountains of Epirus resounded to the cry of Aeraa!!! (Greek: Αέραα!!) as the Greek army attacked the Italian forces invading Greece on 28 October 1940, at the beginning of the Second World War. The war cry became a symbol of resistance and courage during the battle against the Italian invaders.

However, the battle cry of Aeraa!! was first heard during the First Balkan War (October 1912 – May 1913) against the Ottoman Empire when Greece was trying to free land still occupied by the Ottomans. During the siege of the city of Ioannina (Greek: Ιωάννινα) in north-western Greece and the capital city of Epirus, the cannon balls, which did not always find their mark, would go flying over the heads of the soldiers making the sound of strong wind. At every unsuccessful attempt, the Greek soldiers would cry out Aeraa!! because all they could hear was the sound of the wind. The Greek forces took up this cry when they in turn attacked the enemy in order to inflict panic in their lines. 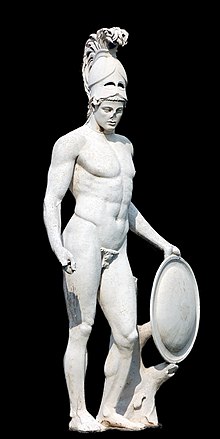 It’s interesting how such a small word as Aerra!! can lead you back in time to Ancient Greece and the origin of the word. In ancient Greek mythology it is connected to the goddess Alala (Greek: Αλαλά), referred to as the sister of war as she is associated with the god of war, Ares.

Alala was the daughter of Polemos (Greek: Πόλεμος – war). He was a Daemon, a lesser diety. Alala lived on Mount Olympus, the home of the gods, as her parents were Zeus, king of the gods, and the goddess Hera. Her symbol was a military helmet and a torch. She is often seen standing behind Ares. 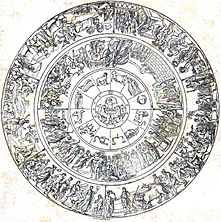 Ares was usually accompanied by Enyo (Greek: Ενυώ), who would organise the destruction of the cities, inflicting terror and bloodshed among the population. Present in this display of terror and destruction would be Eris (Strife), Phobos (Fear) and Deimos (Dread). Phobos and Deimos were sons of Ares. The four of them (Enyo, Eris, Phobos and Deimos) are depicted on the shield of Achilles (Greek: Αχιλλεύς), the hero of the Trojan War, which had been especially forged by Hephaestus, god of blacksmiths, artisans, metallurgy, sculptors, craftsmen, fire and volcanoes. Achilles used the shield in his fight with Hector, the Trojan prince, to avenge the death of his closest friend, Patroclus. The decorative figures on the shield from an 1832 illustration are impressive and very symbolic. 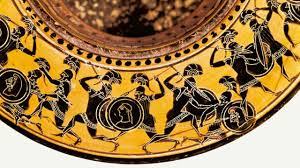 The ancient Greek soldiers would at first sing battle hymns or paeans (Greek: παιάν), designed to implore or petition the god Apollo to help and protect them during the battle. As they neared the enemy, they would break out into a full-fledged war cry of Alala, banging their spears against their shields at the same time. This blood-curdling sound resembled the sound of screeching birds.

Pinda, the 5th century B.C. Theban poet, writes of the goddess Alala: Hear me Alala, daughter of Ares, prelude of the spears, you to whom men fall as offerrings for their homeland in death’s holy sacrifice.